Standing in front of the High Court, facing the street with the din of the traffic passing through, it is hard to imagine the life here in late 19th Century. No smoke-spewing vehicles, no harried traffic police and not even the huge imposing Vidhana Soudha. The Cubbon Park was a sprawling green area with the barracks on one side and the imposing Residency (present Raj Bhavan) on the other.

Officers of the Secretariat would ride through the lush green park environs on horse carriages and enter the Mysore public offices (present High Court) for their everyday work. The entire area was green, calm and its tranquillity was quite imposing for a person from the city area. No, closing my eyes to visualise the era did not work.

Today, if you walk along this road, King Asoka’s four-headed golden lion that sits atop our Vidhana Soudha shines in the blazing sun. Across this structure, is the elegant red-hued building that houses the Karnataka High Court. Observe closely and you’ll find that the emblem on the central wing is slightly different to the Karnataka’s State Emblem. Beneath it is a simple heading that says ‘Offices of the Mysore Government’.

Initially called as Bowring’s Attara Kacheri or Mysore Public Offices, it used to house the revenue and secretariat of the Mysore Government.

In 1701, Chikkadevaraja Wodeyar distributed the governance into 18 departments, influenced by Aurangzeb’s style of administration. Since then the Hindi name Attara was coined to Mysore Governance. The eighteen kacheris (departments) also called as chavadis came into existence and this was followed during Tipu’s and later in the British reign. Some examples of the chavadis are –

In 1799, Tipu Sultan died fighting the British in the fourth Anglo-Mysore war. Srirangapatnam was finally conquered by the British and handed over to the deposed Wodeyar rulers. The administration, initially run from Tipu’s Palace at Srirangapatnam shifted to Mysore. Though the administration style reverted to ancient Hindu law and traditions, the public offices were always called Attara Kacheri.

During Governor-General William Bentinck’s reign, due to poor administration, the Maharaja’s powers were seized by the British. From this time onwards until 1881, the government was under Commissioner’s rule. In 1862, Levin Bentham Bowring, who succeeded Lord Cubbon, was keen on relocating the public offices to Bangalore as it was nearer to the Madras presidency. The British had already setup a well-functioning military barrack near Halasur Village since 1809. So, he decided to construct a building in the leafy environs of Meade’s park, later renamed as Cubbon Park.

The Attara Kacheri building was designed by Major Gen Richard Hieram Sankey, the Chief Engineer of the Mysore government. Sankey designed an arcade red building in the Graeco-Roman style. The construction contract was awarded to a British firm, Wallace and Company, which then sub-contracted it to Arcot Narayanswamy Mudaliar and Rai Bahadur Bansilal Ramnathan. It was completed in 1869 at a cost of Rs.4,27,980. The public offices included the revenue and the secretariat and other offices including the judiciary.

The original building consisted of only half of the existing building and with fewer wings. There was an annexe built on the north-east corner in 1917 and an extension of entire building in 1995 that spanned across an area of 2,40,508 square feet, built in the same style of architecture. The court has also survived a demolition scare in the 1980s and was saved by the Supreme Court decision based on a PIL by heritage concerned citizens. Ironically this was also the first PIL to be submitted in the High Court.

During the days of the Mysore rule, the Dewans of Mysore conducted the state affairs in a chamber on the first floor of the old building. After independence, it was converted to a tea-room for the advocates. With ancient chandeliers and colourful paintings on the ceilings, typical of any European palace, this room looks very attractive. In 2006, Chief Justice Cyriac Joseph promoted the idea of converting it into a museum. Though the museum is very young, its artefacts are very unique and antique. Some of the exhibits here include – 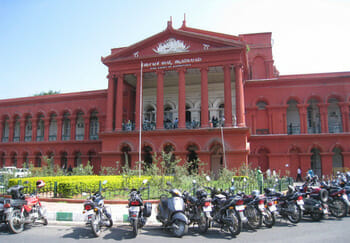 Across the walls are photographs of Chief Justices of all eras, the history and making of Attara Kacheri, the eighteen kacheris of Mysore government and a huge canvas that displays the signatures of all the members of the initial draft committee of the Constitution.

Note: Entry to the court and hence the museum is restricted.

As one walks through the corridors of this centuries old structure, few things have not changed much; the elegant European faces that adorn the skilfully designed banisters of the staircase, the colourful red uniforms of the dafedars and the beautiful gardens surrounding the building.

Listen to the curator of High Court Museum, Sreekanth Y B talk about the history of Mysore post Tipu, the making of Attara Kacheri, the Judiciary and the present High Court. (Kannada, 3 mins)

The annexe building constructed in 1995 behind the old one reflects a similar architecture and it is hard to identify the old from the new. The court halls are in the newer building while the offices of the judges are housed in the old. There are 37 court halls in operation and 37 judges, though the sanctioned strength is 41.

The courts have digitized boards that display the case and stage of hearing, and the stenographers now use computers. The police are polite and the lawyers hurry across the passages in their flowing black gowns. Though the museum is mainly for the advocates, I doubt if they have the time to learn and appreciate about the history of this ancient building.

In an otherwise typical public office scenario, it the horde of pigeons that fly in groups to sit on the sloping roofs and the ledges that add some charm to the place. ⊕

A Saturday on the tracks at Kanteerava

Children between the ages of 9 and 17 have the opportunity to participate in the athletics meet at Kanteerava Stadium on Saturday, May 21. Here are the details.

“It’s great to earn money from something you love”

Meet Vasu Dixit who recently turned music-director with ‘Bengaloored’, a movie about the city. He is also a core-member of Bangalore-based fusion band, Swarathma.