Srinivas Murthy is working President of the Rickshaw Chalakara Sangha (Autorickshaw Drivers’ Union) in Bangalore which spearheaded the recent strike by autos in the city. The union is affiliated to the Community Party of India-linked Center for India Trade Unions (CITU). In conversation with Samuel Jacob, he avers that driving a rickshaw in Bangalore is no longer viable proposition given the increased cost of living and fuel prices. The Union is asking for a hike in the minimum rate from Rs.12 to Rs.20 for rickshaws plying in the city. 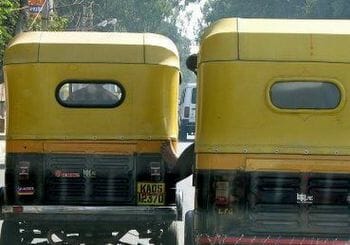 Murthy is about 65, is soft spoken and was wearing a simple white shirt and black trousers. He was calm through most of the interview, though on questions about affordability of auto rates for passengers and refusal of fares he did get a little defensive.

Why the fare hike?

Both the cost of living as well as the cost of operation for a rickshaw has gone up. For eg. LPG prices have gone up by Rs.6.38 in the last month alone. Housing rentals which used to be Rs.1000 to Rs.1500 a month is today Rs.2,500 to Rs.3000. As a result the auto driver has to keep moving farther and farther from the city to afford a living place. Then food prices have also gone up. Even the BMTC fares have gone up. The rickshaw driver has to spend on his tiffin, tea, coffee etc and after that on his family. Our calculations show that he has to earn at least Rs.200 – 250 a day to be able to sustain himself. We take one working month as equal to 25 days since five days in a month goes towards rest and maintenance of the vehicle.

Currently what’s the average earnings per day for a auto driver?

What are the parameters used to arrive at your demand for a minimum of Rs.20? There are 18 parameters set by the government’s expert committee in 1996. According to these parameters we have submitted our memorandum to the Deputy Commissioner who is the chairman of the Regional Transport Authority. Running cost per km, including all expenses, works out to Rs.9.07. We can run the vehicle only 70 kms/shift. In that you also have to make allowance for empty haulage (rickshaw running empty) which on an average is 20 per cent of the time.

Do you think passengers can afford this rate?

Affordability depends on the kind of passenger. Cost of living is something that affects everyone. See, autorickshaw driver has to also live in Bangalore despite the cost. However, we are not adamant on Rs.20. That is the necessity of the driver. But, we can also understand the hardships faced by the passengers. Middle-class and lower-class people also use rickshaws. So we have said that they have to fix the fare between Rs.16 – Rs.20 as minimum. That is acceptable to us.

Does the union do anything to encourage ricks to ply by the meter rate?

We are aware that meter tampering happens. About 10-30 per cent of rickshaws do that. To avoid this we have been asking that the Weights and Measures department of the state government who are supposed to do yearly checks and seal the meters, to take stringent action against those who tamper the meters. They are not doing that. One of our demands is that this activity of checking the meters should be handed over to the RTOs since we cannot control the corruption in the Weights and Measures department despite several memorandums and appeals on this problem.

Why do ricks refuse fares? Isn’t it counter productive to their business?

That’s right. Though they are issued a ‘Public Service Vehicle Licence’, most of the rickshaw drivers don’t know their duties with regard to service. Even the officials who are issuing the licences are not giving proper instruction to them about servicing the passengers. Their business is dependent on the service but many of the rickshaws treat it only as a business. We have recommended to the authorities that rickshaw drivers must be given 3 to 4 hrs of training on why they are being given the permit and licence to ply their rickshaws and what their duties are and the service conditions attached to such a licence. At least the basic of the subject they have to know.

Then there is this problem of single-side business. In the morning everyone is moving towards the city centre and in the evening it’s the other way round. So naturally when thousands of vehicles are moving one side the vehicles do not get passengers towards the other side. Even though we are fixing the fares taking into consideration empty haulage at 20 per cent, it’s very difficult for the auto to manage if he goes empty more often than that.

What role does the union play in the lives of auto drivers other than negotiating price hikes?

Our union started in 1974 and we provide many services to the auto drivers. This includes assisting him with police and RTO work. Our members do not have to give any bribes to the RTO or Police departments since we have a good working relationship these departments. Our drivers have a red and white name tag by which they are identified. We also give financial help to the tune of Rs.2,000 in case of accidents or death. We get the drivers registered with the RTO for being eligible for a relief fund from the government in case of accident or death which is to the tune of Rs 50,000. There is a group insurance scheme which we encourage the drivers to enroll. We have also implemented the display cards with information about the driver for the first 5,000 autos.

Currently we have placed five demands before the government: 1) A welfare board for autorickshaw drivers. 2) We need ESI hospital facilities or the Yeshaswini scheme which they are providing for farmers and some other categories of people. 3) Permits given by the RTO must not be transferable to any other person. Nowadays a permit is available for about Rs.30-35,000 on the black market. So what happens is that anyone who has the money can get a permit and then he leases out the vehicle to a driver for even upto Rs.200 per day. Also the driver is not responsible for the vehicle. There are cases where the police find it difficult to to trace the actual owner since it has changed many hands. 4) We need houses for the drivers either from the BDA or housing department at a reasonable cost. 5) All of the drivers should be given ration cards.

How many autos ply the roads in Bangalore today?

About 75,000 autos are plying in Bangalore with permits. Then there are about 25,000 others without permits, the illegal autos. There are also 1,75,000 auto drivers in the city since the autos work in shifts.

Almost everyone has converted to LPG.

Is their a calculation on how many more ricks can the city take before it starts affecting business of existing autos?

In 1994 the government asked the Indian Institute of Management (IIM) here to conduct a study on how many autos the city can accommodate. As per that study, the then existing 33,000 autos in 1996 were sufficient to service the city till 2001. Now we have asked the government to do another study by IIM on similar lines, given that the city has grown so much in size and population.

They have no facilities. Driving a rickshaw is more like a temporary job for most of them. They cannot sustain themselves. If there were good facilities from the government, they would think of it as a more permanent job and stick on. They are after all performing an important service for the city. ⊕

Bangalore South Congress candidate B K Hari Prasad: “Planning should be for 25 years, not for today”

B K Hari Prasad, the Congress candidate for Bangalore South, is a four-time Rajya Sabha MP. In this interview with Citizen Matters, he talks about his career so far, and his plans for the city, if elected

When a city on steroids turned into a shining saucer

In the first of a three-part series on what will happen to Bengaluru after the elections-2013, Subramaniam Vincent reflects on how Bengaluru was put on developmental steroids and pushed onto the sky like a shining saucer.

When the journey itself is so much fun

Yezdi bikers drive to Big Banyan tree on Mysore road. And didn’t even see the tree.