It was late on November 3rd afternoon when five men worked by the side of a lonely stretch of road in the as yet un-named land between Anjanapura and Kanakapura Road. The barefooted men silently hoed and shovelled the last dregs of a waste heap, shoving the plastic and other indistinct matter into a truck parked nearby, where one of the men stood next to the waste. This is near Avalahalli, about 2.5 kms east of Kanakapura Road.

At first glance, it appeared to be one of the many dumps of domestic waste one often sees on empty plots, full of plastic bags. In fact, it was something much more dangerous – it was untreated hospital waste.

Leo Saldanha of Environment Support Group and Sangeeta Gowra, 35, a teacher at a school nearby, were among the first to see the dump and had initially thought it was restaurant waste – among the items that had spilled out of the plastic bags or were lying loose among the waste were coconut shells and coffee shop waste. But then they noticed the blood samples, needles, lab reports, visitor passes, cotton, surgical masks and other items among the waste and realised what it was.

Dumping of such hospital wastes is of course in contravention of the Environment Protection Act (1968) and the Biomedical Waste (Handling and Management) Rules promulgated in 1998, and subsequently amended in 2000. These rules clearly stipulate that it is the responsibility of the generator of biomedical wastes "to take all steps to ensure that such waste is handled without any adverse effect to human health and the environment." That the untreated waste was mixed with kitchen wastes was a further violation of the law, which clearly states "Bio-medical waste shall not be mixed with other wastes."

To make matters worse, Saldanha picked up a sheaf of papers from the site which turned out to be requests for biochemical tests and lab reports of particular patients. Each report gives several details including the name of the patient, his or her Universal Hospital Identification Device (UHID) number and a barcode. Such patient details are usually held to be confidential. These reports, as well as 80 investigation slips and some discarded visitor passes that were at the site were all from Apollo Hospitals, Bangalore.

No ownership for offense

Officials at Apollo Hospitals denied any knowledge of wrongdoing. According to Dr Yatish, Deputy Medical Officer, Apollo Hospitals, the hospital has outsourced its waste handling to Maridi Eco-Industries Private Limited on Kanakapura Road, who come and pick up the waste from Apollo. "Of course," he added, "ultimately, we are responsible for it."

As for the mixing of biomedical waste with other items like coffee shop and restaurant or canteen waste, Dr. Yatish denied such mixing could have happened at Apollo. "We have very strict segregation at the source itself. We use four different coloured containers for four different types of waste," he said.

Maridi is authorised by the Karnataka State Pollution Control Board (KSPCB) to accept wastes. It handles biomedical waste from health-care units in the southern and western parts of the city. M A Srinath, Vice-President, Maridi Eco-Industries, says he visited the dump on Sunday, November 2nd afternoon after he came to know of the complaint. He categorically denied that Maridi dumped the waste. "We have very clear guidelines on what we accept. We do not handle kitchen waste and we do not accept mixed waste. Most of that dump was kitchen waste, with biomedical waste mixed in it," he said, adding that Maridi has often had to reject waste if it did not meet their standards. 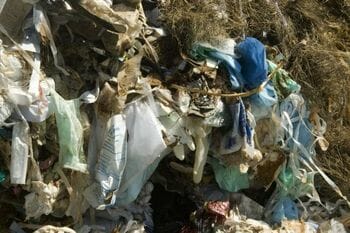 The Karnataka State Pollution Control Board (KSPCB) responded with alacrity to news of the dumping and visited to site. Officials from the KSPCB carried out a site inspection on Sunday evening. C D Kumar, Senior Environmental Officer, KSPCB, said later that "they are supposed to hand over the wastes to a common facility for treatment and are not supposed to dump like that". But he declined to comment further saying only that KSPCB’s further course of action would be decided once their investigations were complete.

According to Naseer, a local resident, the dumping of hospital waste is not new, and it used to be dumped behind a huge boulder nearby until about a month ago. They requested and threatened the truck driver, and even broke his windows but it continued. "We then complained about it to our MLA (M Krishnappa, BJP, Bangalore South), and he got it stopped. But now they have dumped here" says Naseer, adding that the trucks generally come to dump around midnight.

This particular dump appeared on the morning of 2nd November. By the afternoon, dogs, goats and even buffaloes were feasting on the waste, attracted by the stench. The next morning, according to Naseer, the waste was partially burnt, though it is not clear by whom. By late evening, the offensive pile of waste was cleared away by a general waste contractor and a band of men wearing neither gloves, nor masks nor any other manner of protective clothing. The waste was gone but what of its long-term effects?

One can only hope that it did not infect the people who worked with it or the animals that feasted on it, that it did not pollute ground water, and did not leave any hazardous residues on the site. ⊕