Whenever I read about child prodigies, I invariably wonder if the child has been allowed to be a child or forced to achieve things by the parents or teachers. And in many cases, my apprehension proves to be right! Fame-hungry parents often push children towards extraordinary achievements, robbing them of a normal childhood in the process. Many such tragic stories of child achievers abound, especially in the world of advertising and cinema. The children lose their innocence and start talking like depressed adults very early in life.

I went to Master Nischay Bhargav’s house with the same apprehensions but was in for a pleasant surprise when I was welcomed by a happy and bubbling Nischay, who was busy watching a cricket match on the television. The showcase in that living room was overflowing with trophies and pictures.

“What is your field of interest?” I asked doubtfully, as I had not done enough home-work about this ninth standard boy of Sri Kumaran’s Public School.

His eyes glued to the match on TV, Nischay rattles off that he learns key board at Manjula Gururaj’s Sadhana Music School and loves to dance and participate in many events and contests. He is also an athlete and has been an individual champion in the sports events conducted by his school for the last three years; besides winning prizes in the Zonal level sports meets, conducted by the Public Education Department, Government of Karnataka.

He also loves theatre and is a member of AS Murthy’s theatre group Bimba. “I anchor talk shows and read news on Asianet Suvarna channels and also participate in literary contests like debates, essay-writing and quiz” adds Nischay, “I love cricket. Hey, look at that shot! Fantastic!”

Just being interested in multiple fields is something but to be able to excel in everything that he tries, is another thing. “Have you been forcing your son to participate in so many events and achieving?” I ask his father Venugopal, a Development Officer with LIC, as he gets a bundle of certificates and plays a CD, showing Nischay’s achievements in brief, to be sent to Pogo channel for the young achievers’ show. 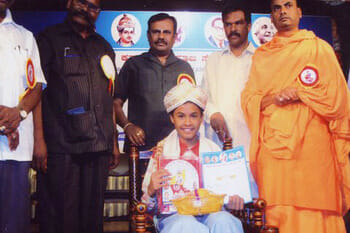 “Not at all!” says the proud father, “Right from his first standard, Nischay has been a very active child, participating in all the events and contests that the school organises”. As parents, they have only been supporting him in all that he does, and “…in fact, I spend most of my time chauffeuring him around the city for the various events” says Venugopal. Nischay’s mother Kavitha is an English lecturer at PES Polytechnic College.

“Whatever he does, he does it with total dedication and interest and most often comes out in flying colours. He is good in studies too. So, we have nothing to object”, says Kavita.

Has Nischay lost his childhood? “No, I find time for all my activities by proper planning” says the boy. He still finds a lot of time to play with friends, socialise and laze around. Nischay was in fact off to friends’ houses for a get-together on Friendship Day the day I visited him. “I like it this way, busy with the activities that I am interested in”, says Nischay, as he answers a number of phone calls wishing him on the occasion of Friendship Day.

Blazing a trail of glory

Nischay on the wall poster of the award winning film Thutturi. Pic source: A V Venugopal.

No wonder this dynamic little boy was chosen to act in the national award winning Kannada film ‘Thutturi’ as also in the popular film ‘Care of Footpath’, which entered the Guinness Book of World Records for being directed by the youngest director Master Kishan and has won two state awards.

Nischay has very fond memories of his experience of acting in these two films, along with another child achiever Master Kishan. Nischay was the sole performer in the documentary ‘Violence and Truth’, which won the Best Film Award in the Short Film Festival organised by Lensbug, Bangalore. He has also acted in a Doordarshan serial ‘Chinnara Katte’. 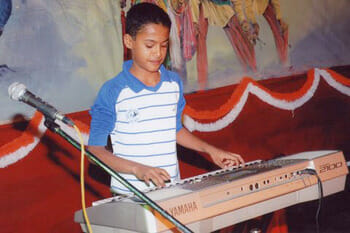 He is a regular performer at Bimba and has acted in many of their mime shows and dramas. He is the youngest kid to have completed the Windows and MS-Office course from the National Institute of Computer Technology. No wonder he has been bestowed with many awards and citations, the most prominent of them being –

The list goes on. He was one among 48 talented children shortlisted by Pogo Channel for the Young Achievers’ Show at Chennai.

“What do you want to be?” The most common question elicit the reply “I want to become a pilot”. I was thrilled that I got a different reply, as any child today would mechanically say “Software Engineer”.

I came out satisfied that children have immense capabilities and capacity and given the right kind of fillip a
nd support, they bloom happily, with least effort. So, parents – don’t stop your kids from doing things of their choice and force them to get glued to books and coaching classes. Who knows your child may shine as an actor, a VJ, a theatre person, an artiste, a musician, a soldier, a pilot, a doctor, a businessman or as a politician? When there are thousands of fertile fields available, why push your child to limited fields and make him a robot? ⊕

BBMP’s discredited financial state of affairs and lack of internal audit since 1964 is not news to anyone. However, even after CAG’s scathing findings of 2011, there is still no clarity on a return to timely and comprehensive audits.

On Metro, bulldozing its way through South Bangalore