A woman sits with her ten-month-old baby. It’s lunch time. Even as the hot afternoon sun beats down on her face, she quickly covers the baby with her veil protecting him from the sun. A huge apartment complex is under construction. There are over 12 workers there, not to mention two toddlers of around two years running behind their mother. She has just finished eating and resuming her work. She shouts at them to stop yelling. They don’t.

Two youngsters aged 16-17 lose their grip over the cement bag they are carrying and it rips apart. There are two more couples, sitting further ahead away from the dust and noise, trying to enjoy their meal. The kids are still wailing. But somewhere they realise that their mother is busy. The cry for attention, and maybe an afternoon siesta, goes down a few decibels. While one child goes and buries his torso inside a hammock-like cradle made by tying a saree and suspended from a nearby tree, the other waddles her way to a mound of sand right beside the tree and lies down, still sobbing. 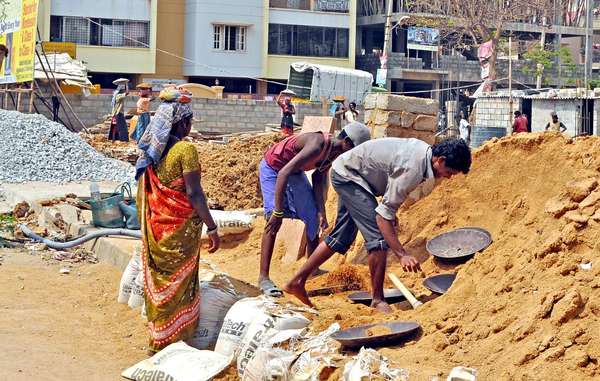 These men and women, both young and old, toil here every day from morning to night under varying weather conditions. They are one of the many pieces that fit into this puzzle of a city that is developing at a rapid pace. Not much is know about where they come from, how much they earn, where they live, and how do they manage their families. And thousands of such workers are building the homes for the better-off of the city.

Lack of jobs leads to migration

"I’m from Raichur. I came here last year with my husband. I was in my 7th month of pregnancy. My son was delivered here," says Hanumanthi, 24, with her ten-month-old baby peeking from behind the veil. "There are 15 labourers working in this site. All of us are from Raichur. There wasn’t much work back home and the work we got was not enough to feed the family. So we came to Bangalore" she adds.

The reasons to leave their villages are many. Lack of opportunities, bad working conditions, poor pay, family disputes, or even situations that are beyond their control such as famine, drought or floods.

This group of labourers migrated from Raichur to Bangalore in search of a better means of livelihood. Building construction was not the kind of work on their mind. But that’s what they got. Hanumanthi says, "it paid reasonably well, so we stuck to it." Hanumanthi and her fellow workers live in shelters made of sheet in and around the areas of Basavanagara and Vijnananagara. The apartment under construction is in C V Raman Nagar, not too far from where they stay. So they walk to work every morning. "The kids are too small either to be sent to school or to be left behind, so we bring them along," another worker says.

Balakrishna, 26, who works at another construction site in Kaggadasapura with 20 other workers, has something similar to say. "I come from Ongole district in Andhra Pradesh. There were no job opportunities there so we came here. The fact that we knew the contractor for this building made things easier. He too comes from the same place as us and we have known him for years," he says.

No home of their own to live

They live on the ground floor of the building under construction. A small area towards the corner has been given to them. Huge blue plastic sheets have been tied to separate this area from the rest.

Rangaraju, 38, shifts between working on drains and building construction. He lives in Chikkapalya, Bannerghatta with his family. "We live in rented sheds there. They are tiny ones with no water or electricity. There are no doors let alone toilets in these sheds. But they cost us anywhere between Rs. 1000 – 3000. We bring water from outside to drink. They don’t let us cook inside these sheds too, so we do it outside. On days when it rains, we don’t cook at all," he says.

There are no proper bathrooms or lavatories. "But we manage somehow. There is a Nirmala toilet right behind this building near the bus stop. We go there to bathe or relieve ourselves," Kaala from Gulbarga states.

Unlike other labourers who come to the city in search of work and settle down here permanently, these workers from Ongole come here every year, work for a few months and go back home once they are done with a project. So what do they do once they go back? "Nothing!," says Venkateshulu, 30, with a smile. "Once there we don’t have a job. We don’t even have farms where we can work. This building construction work is our only source of income." It has been over a month since they came and they will be here for another three months before returning to the life of uncertainty in Ongole.

While for some it is an escape from their dismal living conditions, for others it is an alternative means to earn a living. But either way it guarantees them a form of social mobility. Coming to the city is a new experience. The transition from a quiet town or a village to a bustling city, they believe, opens up new avenues and bigger challenges. Having said that, their line of work is not easy and the even the most basic amenities like food, water, electricity and shelter are hard to get.

Most of the labourers are not aware of the benefits offered to them by the government. Pic: Nalme Nachiyar

Bheema, 23, is from Gulbarga. She and her fellow workers, five men and four women, have been here for the last five months, constructing a house in Jayanagar East End. "I used to work on our own groundnut and jowar fields. But the drought there (Gulbarga), killed our land. There were no rains and leading the life was becoming increasingly difficult. So we all came to Bangalore," says Bheema.

Savitri, 26, Kaala, 24, Malamma, 30, alongwith their husbands came to the city in search of work. All of them know each other in Gulbarga – some are cousins, some are neighbours. "But we all worked on the same field. Now nobody works on that field anymore. It lies there dry and barren. From whatever we earn, we send a little back home to our parents every month", says a shy Kaala.

"When we came to Bangalore, we went around the bus stand asking for odd jobs. We weren’t specific about the kind of work we wanted to do. But the contractor for whom we now work found us and offered this work. We live here now. They have given the third floor of this building for us to stay. We sleep on the floor and cook here too," Savitri adds while passing by with a load of sand on her head.

So are they planning to go back once they finish work on this house? "We don’t think we’ll go back home. If the contractor gives us some other work we’ll move there. Life back home is both hard and uncertain. Here, though the living is hard we know for sure that we will get work somewhere to keep life going. Also, the payment is much better here. The men are paid Rs. 300 per day while the women are paid Rs. 200. The builder and the contractor have also said that they’ll post a watchman here to ensure our safety", Savitri explains.

The money they earn is enough to make ends meet but they wish for better living facilities. "We don’t shell out money for our travel, the contractor knows a person who picks us up and drops us back in his van. They give the money to an in-charge who pays us weekly. In case we need money in between, we take it from him," says Rangaraju.

"The pay is not drastically high when compared to what we got there. We get about 50 rupees more than what we are paid there," Hanumanthi says, referring to daily wages. But Ravi, 33, from Madikeri feels that he has earned more after he came to Bangalore than what he would have earned back home. A man earns around 7,800 rupees per month while a woman earns about 5,200 rupees on an average. But even the 13,000 that married couples, together, earn per month is nowhere enough to meet all the expenses, they say. The house rent, the debts, the money they send back to their villages leave them with just enough to live from one day to another.

This kind of a living also forces them to compromise on their children’s education. "We can’t send our children to school now. It’s not just the money, it’s the distance too. We had put them in school when we came here. But as we move from one area to another for work, it becomes very difficult. There’s no one to bring them back from school or no one to take care of them once they get back and we can’t leave them alone there. We’re scared. So we bring them along with us," a 27-year-old Chinna says.

Malamma has a five-year-old daughter. "I can’t afford to send her to school. I do want her to study but taking care of her education is an added burden. I just let her be. She goes around the area and plays with kids from the other construction sites," she says. Very rarely, some people like Selva manage to send their kids to government school.

These men and women are engaged in building our houses and our city from 7 am to 7 pm. They came here in search of work and a better life. They now build others’ dreams and others’ lives. "I don’t want to do this all my life. I want to get away from here as soon as possible. Will you find me another job?" 16-year-old Seena’s voice is the only one that resonates amidst the others.

Surprisingly, none of these workers have ever heard of the Karnataka Building and Other Construction Workers Welfare Board or any of its benefit schemes. They have also never approached any union for help.

Somewhere lies a hope that they will build a life for themselves one day too, albeit brick by brick.⊕

See if you can take up this green spot challenge!

No more black spots – let there be green spots. With this challenge, you will make the planet greener with a lot less landfills.

Justice N K Patil report gave recommendations to protect lakes of Bangalore. Even after a year, the state has failed to form lake protection committees. Now the state government is facing Contempt of Court case.