In Part I and Part II of the series, Citizen Matters had explained how the Manipal ETA Infotech is constructing a multi-crore project near Agara lake, consuming the wetland and lake drain, and how the authorities like Ministry of Environment and Forests have approved the project. Part III explains the traffic-related problems the project has brought in.

Studies – including those submitted by the builder – show that the Sarjapur Road is going to be completely choked once the project by Manipal ETA Infotech comes up. The project will have parking facility for over 14,400 vehicles. The entire complex is supposed to be operational by 2014-15. 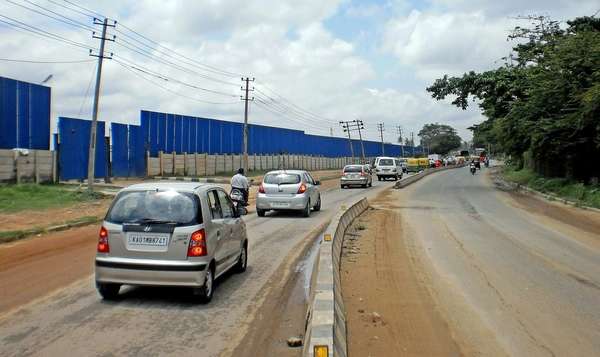 The 15.5 meter road in front of Manipal ETA Infotech. The entrance to the complex can be seen on the left. Pic: Navya P K

The project is located along a narrow section of Sarjapur Road. Currently the width of this stretch is only 15.5 meters, about 50 feet. The road stretches for about two kilometres straight, without any intersection, between two end points of Agara lake. Sarjapur Road meets the Outer Ring Road connecting Silk Board and Iblur, at the Agara bus stand.

Even though the road is narrow, traffic is manageable on this stretch now, as there are no intersections or cross traffic. The IISc study shows that the current Level of Service (LOS) of the road is ‘C’ i.e, ‘average/fair’. LOS is a standard grading system on the effectiveness of service. LOS grades here range from ‘A’ to ‘F’, with ‘A’ being the best grade and ‘F’ the worst.

The study says that, once the project comes up, the traffic volume will almost double. The current traffic is estimated to be 2000 PCUs (Passenger Car Units) per hour, which may go up to 3750 PCUs/hour after project completion. But the road does have not capacity to handle such traffic; its capacity is only 3500 PCUs/hour. Because of this, the LOS will go down to ‘F’ i.e, ‘very very poor’, says the study.

Ironically, the traffic management study submitted by Mantri Developers (who is building the project) also says the same thing. The consultancy ‘Consortia of Infrastructure Engineers’, headed by traffic expert Prof M N Sreehari, had done the study for Mantri. This report says that the current LOS is ‘B’, which will go down to ‘F’ once the project is up.

It is not clear how the project was approved, despite the traffic study giving this conclusion .

Traffic police have no say in traffic plans

Traffic police is usually not consulted even when such mega-structures are approved in the city. “No one asks us for approval or opinion. There is no system for this,” says M A Saleem, ACP (Traffic). He says that the project will cause traffic congestion, and that the approach roads on both ends of Agara lake would be clogged.

The IISc report points out to the traffic bottlenecks before and after the project.

“Already congestion is high on the stretch from Silk Board to Jayadeva flyover, especially since the flyovers in Marathahalli came up,”  he says. There is already a proposal to build an elevated corridor between Silk Board and Forum Mall because of such congestion.

On Sarjapur Road too, there was a plan sometime ago, to build underpasses and flyovers. The project was scrapped after strong protests from residents nearby, and an expose that showed traffic statistics were falsified at the BDA to get approvals.

Saleem says that an elevated road can be built on this stretch instead. “We have proposed to the BDA to build an elevated corridor from Madiwala Checkpost to Jakkasandra.” He says that elevated roads are better compared to underpasses. “Underpasses do not increase capacity of the road and will hinder future development, unlike elevated corridors. The decision is up to the BDA now,” he says.

Proceeding at any cost

In a nutshell, this massive 72-acre 2300-crore SEZ-offices-residences project is proceeding despite messing up with interlinked lake drains and increasing the risk of flooding, getting a BWSSB no-objection despite the water board not knowing about the whole project, even though commercial borewells barred by a central ruling, a city zoning land use map that was changed in the last minute, and a traffic study that shows that road condition is going to be very poor.

None of the city authorities appear to be able to re-examine approvals for the project. Everyone is looking the other way. However, one door still remains open at the regional office of the Ministry of Environment and Forests (MoEF), which says it will act if a complaint is made.

About Navya P K 292 Articles
Navya has 12 years of experience in journalism, covering development, urban governance and environment. She was earlier Senior Journalist, Citizen Matters, and Reporter, The New Indian Express. She has also freelanced for publications such as The News Minute, Factor Daily and India Together. Navya won the All India Environment Journalism Award, 2013, for her investigative series on the environmental violations of an upcoming SEZ in Bengaluru, published in Citizen Matters. She also won the PII-UNICEF fellowship in 2016 to report on child rights in Kerala and Tamil Nadu. Navya has an MA in Political Studies from Jawaharlal Nehru University, and a PG Diploma from the Asian College of Journalism.

Though more Bengalureans are taking to cycling now, cyclists are highly unsafe on the roads. This Sunday, over 3000 cyclists rode on the streets, calling for motorists to keep them safe

Residents ask for info on rain-water-harvesting