Citizen Matters had earlier reported about a 72-acre SEZ-cum-township coming up in Agara village, near Koramangala 1st block. The project, named Manipal ETA Infotech, had got approval saying that BWSSB will meet its water needs. Citizen Matters had exposed that BWSSB’s NOC (No Objection Certificate) was only for a tiny area of the project, even though NOC is compulsory for the entire area. Also, the BWSSB said it did not even know about the project in its full size. 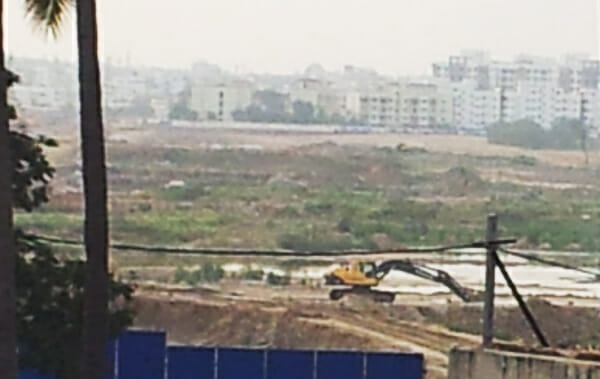 The project is a joint venture between Mantri Developers and Century Real Estate, with Century providing the land and Mantri developing it. A 2011 SEBI document (see page 14) mentions Sushil Mantri as Chairman and Managing Director of the company Manipal ETA Infotech Pvt Ltd, which is floating the project.

But this is only the tip of the entire bunch of illegalities related to this project. A recent report from the Indian Institute of Science (IISc) shows that the project has encroached two Rajakaluves (primary drains) that connect Bellandur lake with Agara lake. The project is located right next to Bellandur lake – in fact, it is right upon the fragile wetland area, which the CDP earlier classified as a valley zone (part of green zone). The IISc report says that drain encroachment will increase the risk of flooding in nearby areas during rainy season. It will also lead to groundwater depletion. The traffic on Sarjapur Road is also going to rise exponentially once the project is operational.

The project is located right next to Bellandur lake – in fact, it is right upon the fragile wetland area, which the CDP earlier classified as a valley zone (part of green zone). The IISc report says:

The report was prepared by the Energy and Wetlands Research Group of the Centre for Ecological Sciences, IISc. State and central rules say that there should be a 30-metre buffer zone around water bodies, where construction is not allowed. There should also be a buffer of 50 meters on either side of Rajakaluves, according to BDA’s Revised Master Plan (RMP). But in the above-said project, the report says, that this rule has been violated. The project is located upon the wetlands and flood-prone zone around the lake.

Lead researcher for the report Dr T V Ramachandra says, “Even the construction debris is being directly dumped upon the lake, in the lake’s eastern part. We had visited the site and verified this.” The report shows images of a Rajakaluve that used to run across the project site, but has been completely filled up now. This Rajakaluve was spread across an area of 0.56 hectares (586 metres in length). Another Rajakaluve spread across 0.5 hectares has been encroached. Overall, 1.06 hectares i.e, 2.6 acres, of drain area has been encroached.

Apart from this report, even Google satellite images of the project site during the last few years, tell the same story. While Google images of 2007 show the entire Rajakaluve across the site, the current image shows only dry land that has been flattened for the project.

The project was approved by the KIADB (Karnataka Industrial Areas Development Board). In fact, KIADB’s plan approval documents clearly mention that no drains in the site should be disturbed. 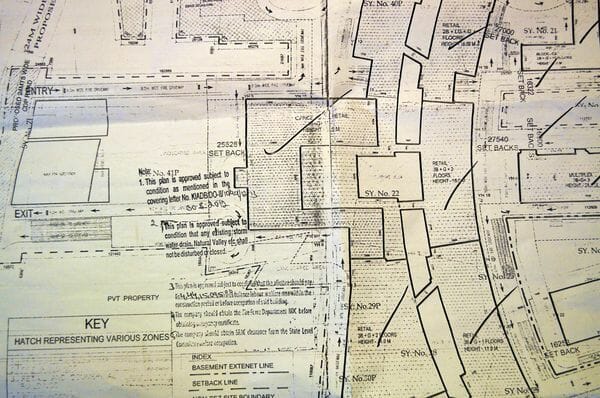 The section of the sanction plan of the project, that says “This plan is subject to condition that any existing storm water drain, natural valley etc cannot be disturbed or closed.”

Before the project starts, an Environment Clearance from the State Environment Impact Assessment Authority (SEIAA) is needed. In this case, SEIAA had given approval based on a document submitted by the company saying that the project was located in proper slope and High Flood Level. SEIAA document shows that there was no separate, direct scrutiny by the authority on this.

Effects of encroaching the Rajakaluve

Rajakaluves are supposed to connect lakes with each other. If they are eliminated and if lakes are encroached, the excess water during rains will not get channelised to lakes or river basin. Instead the water will spill over to the nearby residential areas and cause flooding. On the other hand, reducing the water spread and wetland area means that groundwater level will go down. Construction of too many buildings leaves not much scope for rainwater to percolate down and recharge the water table. The IISc report says that wetlands also purify water in the area, and that constructing over it will kill Bellandur lake.

The report says that dumping of debris on the lakebed has gobbled up the shoreline too. Many birds will have to move out of the area, and the livelihood of those who depend on wetland for fodder, fish etc., will also be affected. The report says that wetlands are in fact capable of giving goods and services worth Rs 10,500 per hectare per day.

We have complied with all norms. – Mantri Developers

The Environment Impact Assessment (EIA), prepared by the consultant EHSCPL (Environmental Health and Safety Consultants Pvt Ltd) for Mantri Developers, says that the flora and fauna in the site will not be affected. It says that there will be 18.4% greenery in the site, which will compensate for loss of greenery during construction. It also says that this greenery will attract bird species. It does not mention any impact on wetland or about any existing bird species around the lake.

Sarvamangala Koti, Senior Manager-PR at Mantri Developers, says that there are approvals for construction. “Regarding the sensitive area, there are areas where builders are asked to leave a buffer and also those areas where they are allowed to build. We have complied with all norms.” She refused to give further details.

Company does not exist in the govt’s database

Another interesting issue is that the firm Manipal ETA Infotech Ltd itself does not appear to exist anymore. The name does not exist in the Ministry of Corporate Affairs database where all firms incorporated in India through the Registrar of Companies can be found by a simple search process. So the background details of the company are not available in the website of the Ministry of Corporate Affairs.

And yet, the company has called itself ‘Manipal ETA Infotech’ in all its correspondence with the regional office of Ministry of Environment and Forests and all other government departments.

Here is where reality shows up in an interesting twist. Consultants who prepared the assessment reports for the company have called it ‘Mantri’, i.e. Mantri Developers. It is not clear if ‘Manipal ETA Infotech Ltd’ exists now, or if the company itself has been closed. Mantri Developers did not respond to Citizen Matters’ query on this.

But first of all, how did a valley become an industrial zone? In Part II of the series, Citizen Matters will try to explore this.⊕

Corrected on May 31st: Area of encroachment is 2.6 acres, not 3.9 acres, as reported earlier.

Check how many BBMP meets your corporator attended in 2014!

Council meetings are the most important meetings held two or three days every month, where the corporators sit and decide how the city has to run. Did your corporator attend these meets regularly? Find out.

What your Councillor asked at the budget session

The action-replay budget did not go down well with some of the councillors including those from the ruling BJP. But the questions they asked were not particularly insightful or new.