The garbage dumped in an area that falls in between S K Garden and Jayamahal has remained untouched since 15 May 2013; The Congress councillors of both wards are busy shifting the blame on one another.

What do garbage contractors do when they need to dispose of the garbage lying in a border area, in between two wards? Do nothing, leave the garbage where it is. The easy excuse is, it is not in their limit.

One such case was reported in Benson town, at a road that lies between S K Garden (ward 61) and Jayamahal (ward 63). The street in question is on the junction of Harris Road and Bore Bank Road. One side of this street falls in the S K Garden ward while the buildings opposite fall in Jayamahal ward limits. This was brought to Citizen Matters’ attention by Sanchia de Souza, who lives in Benson Town, nearby the spot in question.

Sanchia explains how it all started: “On Wednesday 15 May, 2013 at 1.30 am, a garbage van turned up and a very drunk contractor dumped garbage collected from elsewhere at the spot, even though our neighbours tried to stop him from doing so. We tried to first follow up with the contractor for the S K Garden area, requesting him to collect the garbage and take it to where it has to go. But he has not taken any action.” 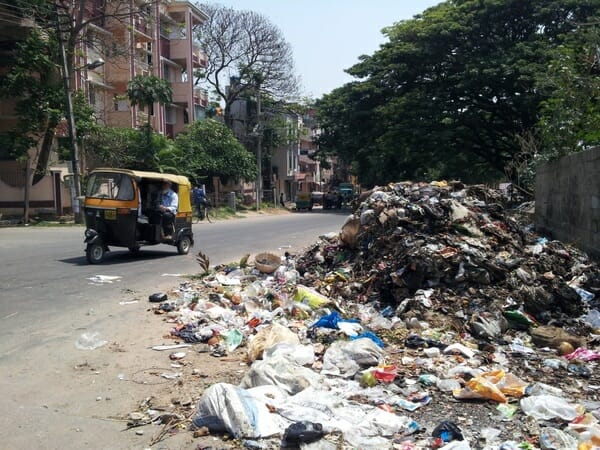 The residents brought the matter to the attention of Devikarani Sridhar, S K Garden corporator, and Gunashekhar, the councillor for Jayamahal ward. “On 19 May 2013, Sunday, we made a complaint to the BBMP itself, got a complaint number and were promised that it would be cleared in six hours. However, both garbage contractors and both councillors are continuing to say that this spot is not their responsibility,” says Sanchia.

When the residents approached, Corporator of S K Garden Devikarani Sridhar was not available for comment. Corporator of Jayamahal Gunashekhar agreed to take up the issue in the council, but insisted that the spot in question is not his responsibility.

Citizen Matters approached Manjunath, the garbage contractor for Jayamahal ward, for a reaction on the issue. He insisted that nobody under his supervision has dumped the waste. “The garbage seems to be coming from the Kavalbyrasandra (ward 32) of the K G Halli sub-division, Pulakeshinagara constituency,” he added. “The spot where the garbage has been dumped is 15 yards away from where the corporator, M K Gunashekhar had got it tarred last year. So strictly, it falls in the S K Garden area,” he asserted.

Devikarani told Citizen Matters that there is no official garbage contractor for her ward and the waste disposal is managed by the BBMP office on orders from the Joint Commissioner. She also denied the area as coming under her ward. “The right side of Harris road is S K Garden and the left is Jayamahal. The garbage is coming from Corporator Gunashekhar’s ward. There is also a choultry near the area from where most of this waste comes and all of it is dumped on the spot in question” she told Citizen Matters.

When asked if she has spoken to Gunashekhar regarding this issue she said, “Not yet. But he and I belong to the same party (INC) and we have decided that we will talk this out and resolve it today (Wednesday).” She explained that even though they get it cleaned in the morning, by afternoon the garbage van dumps it there again.

‘No longer my problem’

Though Gunashekhar had assured immediate action when contacted by the citizens earlier, he had something different to say when contacted by Citizen Matters. “They come and dump it in the night so we do not have any idea who did this. But this spot is off my ward limits. I have spoken to the engineer of ward number 61 (S K Garden) and he said that he would clean it up. Their engineer himself has taken the responsibility to clean it up,” clarified Gunashekhar, addign that “now it is no longer my problem.”

Citizen Matters also contacted Rukkanna, Assistant Executive Engineer, BBMP whose work involves looking into disposal of garbage at the sub-division in question. He said, “I was not aware of this till now. But will attend to it right away and will get the garbage cleared by today afternoon.”

While the councillors were busy throwing the ball into one another’s court, the residents did not t seem to understand how a spot in the middle of the city is apparently not a part of any ward under the BBMP.

At the time of this article getting published, Sridhar, husband of Devikarani, the Corporator of S K Garden, was supervising the cleaning up process, even as he continued to put the blame on the other corporator.⊕

Watch Bangalore’s artists, musicians, dancers, and actors reclaim the space under the streets at the Bangalore Underground Festival on July 12th.

Save Lalbagh’s fish before their last gasp

Large numbers of fish have been found gasping for air in Lalbagh’s lotus pond, occupying all open surfaces of water. Suffering from a lack of availability of dissolved oxygen, it is unclear as to how much longer they can survive, if no action is taken.