The first batch of students from aAp – an Actor prepares Acting and Performing Institute (for film and television) in Nagarbhavi, graduated on 19 May 2013. The occasion was marked by a finale performance that showcased the talents of the first batch of eight students – two girls and six boys, who underwent a three-month course. The show was held at the City Central Library Auditorium, RPC Layout, Vijayanagar on Sunday. 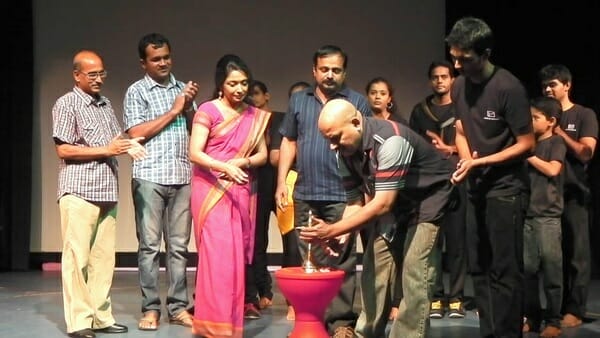 aAp was started on 20th February, 2013 by Usha Bhandary, stage and tele-serial actress and Ravi Theja, actor and director. Usha is an alumnus of NINASAM theatre Institute and has a Masters degree in Theatre Arts from Bangalore University. Apart from acting on stage, serials and films, she has also taught in various acting schools and institutes. She is currently a guest lecturer in the Department of Performing Arts in Bangalore University.

An alumnus of Adarsha Film Institute, Ravi has several TV serials and films to his credit. Currently, he is acting in a comedy serial called Parvati Parameshwara and is also working on his directorial debut titled ‘Biscuit’.

The course offered is a three-month weekend course. The school is now accepting applications for its second batch. The school also conducts week-day dance classes. Interested can contact Usha Bhandary at ushbee25@gmail.com

"aAp has been named after renowned modern theatre practitioner and director, Constantin Stanislavski’s book, An Actor Prepares. We teach students here to follow the principles of 3D – discipline, determination and dedication – towards ones work," said Usha at the event. "Though we started the school with humble expectations three months ago, today it is really gratifying to see my students perform in front of industry bigwigs," she added.

The event saw the presence of music director and lyricist, V Manohar along with tele-serial director Hayavadana and stage directors, Suresh Anagalli and Krishnamoorthy Kavattar. Also present were industry insiders who serve as faculty in the institute, like R Manjunath, cinematographer, Prem, choreographer and Ganapa Gowda, Actor.

The performance was divided into two sections i.e. the aangika and the vaachika – the body movements and verbal expressions. In the first segment, the students displayed their skills in mime, contemporary and Bollywood dances. The second segment saw them staging a paraaku and improvisation skits on their experiences at a railway station. Also played were the video clips of scenes from the play Oedipus which had been enacted by them and shot by R Manjunath. A short 20-minute scene scripted by them and directed by Vinu Balanja was showcased in front of the audience too. The event witnessed a few selected performances from small children who had been a part of aAp’s summer camp.

The performance of the students was hugely appreciated by the guests as well as the audience. "Usually it is difficult when people call you on stage to talk at the very beginning of any event. We’re just shooting in the dark. But now having watched the programme for over an hour and having seen these students perform, I can say with certainty that I am hugely impressed by them. The hardwork and dedication of these students comes through in their performance," observed V Manohar. ⊕

The 5 Bengaluru corporations are like ‘Mysore Pak’ – any way you slice it, the piece has the essential character of what makes the city special, says Ravichandar in his rebuttal to criticism.

You can buy a villa for 3 crores in Whitefield suburbs, but not clean air!

Scenes of the city captured in water colour and charcoal

Artist Srividya G S focuses on the the public areas not yet been touched by the mall culture in her water colours and sketch works.