“Everyone should claim the city. What’s happening today is an outcome of many interactions between citizens. We need a collective and shared understanding of things” said Dr H S Sudhira, referring to the present situation of ‘commons’ in Bangalore in the Public Discussion Series organised by Hasiru Usiru, at the Alternative Law Forum on 18 May 2013. The talk titled ‘Re-imagining Bangalore: Transcending the ‘Tragedy of Commons’ was moderated by Vinay K Sreenivas, Researcher, Alternative Law Forum and a volunteer for Hasiru Usiru. 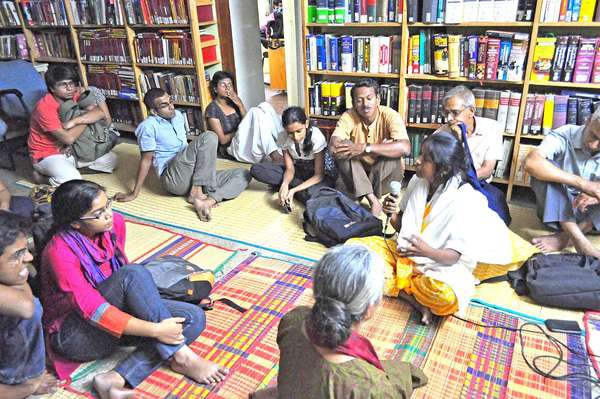 In the process of its evolution, the city has been pushed and pulled in different directions, triggered or resisted by different interactions – some ‘good’, some ‘bad’. The talk attempted to explore some of these aspects within mobility, housing, environment, language and governance with reference to the on-going processes in the city of Bangalore and how it is resulting in ‘tragedy of the commons’-like situation. It also tried to arrive at the means through which this ‘tragedy’ can be overcome, not just a solution but a gradual rectifying process.

The speaker, Dr H S Sudhira is a researcher at Gubbi Labs, a private research collective and Faculty member at the Indian Institute for Human Settlements. Addressing the small but enthusiastic gathering, he began the discussion with a simple yet poignant question. “What is your imagination of Bangalore?” The answers were varied. Some imagined Bangalore as a city that is still trying to find its identity. Some imagined it to be a city that is as lost as its citizens. Others termed it as a divided city. “A city is nothing but people and it is these people who create the institutions that govern them”, observed Dr Sudhira. Bangalore, since its inception has grown leaps and bounds and continues to grow at an alarming rate aided by the institutions like the BMRDA, BBMP, BDA, etc. which have also been created by the people.

Before digging further into the topic, the speaker tried to explain to the audience what ‘tragedy of commons’ really means. Simply put, it refers to the ‘over-exploitation of limited resources that would lead to the depletion or destruction of the common, to the detriment of all’. Ecologist Garret Hardin’s work named ‘The Tragedy of Commons’ is seminal in this field. In economics, the tragedy of the commons is the depletion of a shared resource by individuals, acting independently and rationally according to each one’s self-interest, despite their understanding that depleting the common resource is contrary to the group’s long-term best interests.

Analysing the tragedy that has struck the commons in Bangalore in the recent years, Dr. Sudhira, who holds a PhD on Urban Sprawl and Spatial Planning Support System for Bangalore, from Indian Institute of Science, Bangalore tried to connect the Akrama-Sakrama scheme (2004) as one possible way of transcending the irregularities in the construction and development in the urban areas. The amendment to the KTCP (Karnataka Town and Country Planning) Act was a progress in this regard during 2007, when the JD(S)-BJP coalition was in power. However, with no further action taken the city continues to grow through these mostly illegal constructions making it more viable for opportunities and inviting more people from other states. This has resulted in a lot of migrants, or who are now called neo-citizens, making Bangalore their home.

He went on to say how Bangalore which, in the early 19th century, while neither being language-centric nor a centre of power, had already become a world-class city with flourishing trade and commercial centres. But what changed this equation was the 1956 Reorganization of States when Bangalore came under Karnataka. It had now become a capital city – a centre of power and governance. But the city also became divided in terms of its linguistic affiliation.

Mobility and automobile traffic was another aspect that was discussed. Delineating the effectiveness and feasibility of Metro, which also happened to be a major concern on the minds of most people in the audience, Dr Sudhira revealed that according to the estimation by the BMRCL, Reach One that is supposed to be carrying 10 lakh commuters per day, carries a meagre 41,000 people per day as of now. On the contrary, the BMTC buses ferry around 48 lakh commuters per day. Both in terms of its reach and cost-effectiveness, the BMTC stands a better chance against the Metro. Yet, the estimated cost for Reach Two of Metro has gone up to 50,000 crores, he observed, adding that the cost of around 6,000 BMTC buses (normal and Volvo included) would come up to around 1,500 crores only.

Even with respect to automobile traffic, the current investment stands at 18,000 crores. But what everybody fails to realise is that before the journey begins and after it ends, we are all pedestrians. “It is the first and the last stage” he stated.

“Today Bangalore is neither decentralised nor centralised. But there is a growing phenomenon of anonymisation. No one knows who is in control. So in some ways we have lost or are in the process of losing the commons”, Dr Sudhira averred. Concluding the talk, he stated Scottish sociologist Patrick Geddes‘s concept of Grand Transition which says that ‘all entities will work together to cooperate and evolve.’ He said that it challenges Darwin’s theory of Survival of the Fittest. “Everybody who is experiencing is part of the city. So how we appreciate and engage with the city is fundamental,” he said, terming it as one of the possible ways to transcend the tragedy of the commons in Bangalore in the years to come.⊕

Every major development work in his constituency has been done after consultation and engagement with resident groups or associations, claims Vijayakumar

BBMP, in a press release, has given clarity on the rules for wearing masks. Committees are also being formed at the local and city levels to ensure citizens’ compliance with the rules.