The south Indian state of Karnataka has over 29,000 villages spread across a 190,000 square kilometres. Anyone who travels a little in the state quickly realises that there are common village names that keep recurring.

In Bangalore in particular, lakhs of people from all over India have  settled down and many travel from Bommanahali to Kodihalli or Marathhalli everyday. There is a story here.

Here’s a comprehensive look at the most common village names in Karnataka, prepared using the Census 2011 village directory for the state. 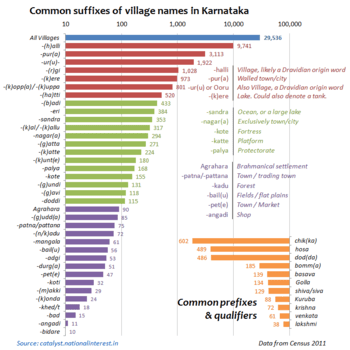 It turns out that the most common village name in Karnataka is Hosahalli – or simply, ‘New Village’. Hosahalli is the complete name of about 108 villages, and forms a part of the name for another 82 (For example, Chikkahosahalli, which means ‘small new village’). Curiously enough, the second most village name is Hosur, which is a variant of the former and also means ‘New Village’. A possible reason as to why this has come about is that as villages grew in size, people might have shifted to an adjacent site and created a new settlement, perhaps a couple of miles from the original village. In conversation, this new settlement would be referred to as just that – new village or new place –  until one day the name got formalised in an inscription or an agreement, and the name Hosahalli or Hosur became permanent. 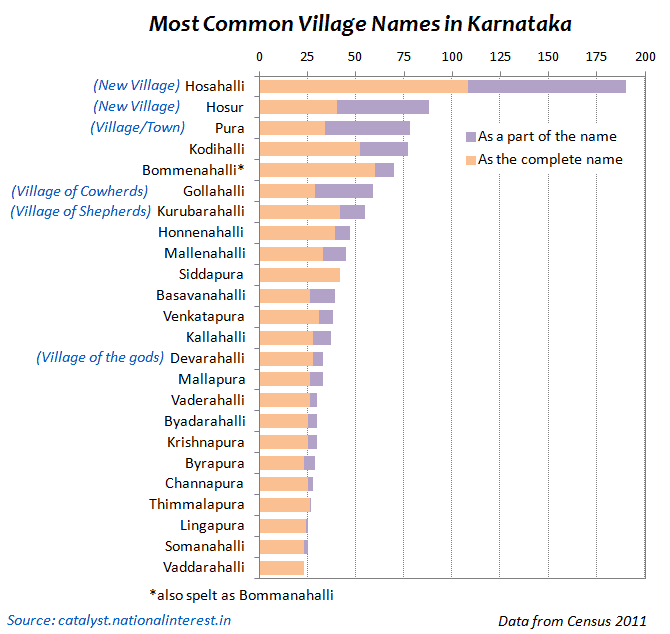 Different words are used to denote a village or settlement as well – from hallis to puras to nagaras. Of these, halli and ooru are of a Dravidian origin, with halli being equivalent of palli in Tamil, while most of the others are borrowed or adapted from Sanskrit. Pura is said to denote a walled town and nagara a town or a city, but they were often used quite interchangeably while naming villages and towns, even historically. Villages are also named after local features like lakes (kere, sandra) and fortresses (kote), as well as after gods and goddesses.

So there you have it. If you are thinking of starting a new settlement in Karnataka, you couldn’t go wrong by calling it the unimaginative, but eminently serviceable Hosahalli or Hosuru. I’ll take them over the Residencies, Enclaves and Gardens that have come up in Bangalore, any day.

Many thanks to Shreevatsa and Mohan KV for an erudite discussion on the meaning of village names, their origins and their use. Kudos to Karthik for suggesting the perfect name for the post. You can also download the raw data used in this post from here.

This post was originally published in Pavan Srinath’s blog at at catalyst.nationalinterest.in and has been adapted for Citizen Matters with permission.⊕

For us average Bangaloreans, the communal ire at the discussion on Bangalore, was quite a treat. For applause from an event’s audience means that a wide-ranging liberal platitude has just been delivered.