"Immorality does not consist in being different. It consists in not allowing others to be so. It is not the individual whose sexual relations depart from the social custom who is immoral – but those are immoral who would penalize him for being different. A law-abiding citizen who respects the rights and dignities of others, if he is made to suffer merely for deviating from the conventional norm, is not the offender – he is the victim".

This is a quote from the rare book ‘The World of Homosexuals’ written by Shakuntala Devi, the mathematical wizard of India who passed away on 21 April 2013, in a Bangalore hospital.

She continues: "The time is overdue now, when rather than pretending that homosexuals don’t exist, or hoping to eradicate them by the sheer weight of disapproval or prison sentences, we face the facts squarely in the eye and find room for them so that they can live unfettered and unmolested, and make their contribution to the common good of community." 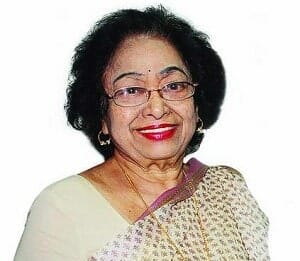 "On this level nothing less than full and complete acceptance will serve – not tolerance and not sympathy." This is a very powerful and deep-felt espousal of the gay cause. The fact that she wrote this book in 1977 – in a country which was still deep in denial about homosexuality and had criminalised it – is remarkable. This sensitivity came to her due to the first-hand experience of living with a man who was a gay and married to her.

On the other hand, her father too had deviated from the conventional norm, by choosing to become a trapeze artist in a circus, when he was expected to become a priest, the family profession. In an interview to a documentary film, ‘For Straights Only‘ released in 2001, Shakuntala Devi said, "My only qualification for writing this book is that I am a human being." Incidentally, the book is referred to as the first "social-reformist homophiliac Indian writing" in English.

This was just one interesting facet of Shakuntala Devi, who otherwise is famous for her capability to calculate complex numerical equations faster than the fastest computer on earth. Her name is synonymous with mathematical calculations. In the 70s and 80s there must have been rarely a household in the country which did not invoke her name when it came to convincing children as to why math is a desirable subject.

While some would call her a mathematical genius, it may be more correct to call her a ‘computational genius’ as one professor of computer science put it. Hers was an ability to intuitively arrive at solutions for complex equations involving numbers. How she did it, no one knows, not even she herself, as she admitted on few occasions. "I am a ‘one-in-a-billion’ case," she said of herself. She could retain and resolve complex calculations in a jiffy, for which her name was entered in the 1995 Guinness Book of Records, after she demonstrated the multiplication of two 13-digit numbers, picked at random by the Computer Department of Imperial College, London. She answered it correctly in 28 seconds flat!

There is one such interesting description of her capabilities in the book by Osho, "From Misery to Enlightenment" where he is talking about the power of Intuition. "Albert Einstein gave her (Shakuntala Devi) a certificate — she showed the certificate to me when I was in Madras where she lives. She showed me all her certificates, and the one from Albert Einstein says, ‘I asked this woman a question which I take three hours to solve because I have to follow a whole method; I cannot just jump from the question to the answer. I know that nobody can do it in less time than I can, and that is three hours. Others may take even six hours hours or more, but I can do it in three hours because I have done it before. But the whole procedure has to be followed. If you miss even a single step…’ "The figures were so big that it took the whole board for her to write the answer. And before he had even finished the question, she started writing the answer."

He was puzzled, absolutely puzzled because it was impossible. He asked, "How do you do it?"

She said, "I don’t know how I do it — it simply happens. You ask me and figures start appearing before my eyes, somewhere inside. I can see 1, 2, 3, and I just go on writing."

Osho goes on to lament: "That woman was born with her intuition functioning, but I felt really sad for her because she became just an exhibition. Nobody cared that a woman who is born with intuition functioning can become enlightened very easily. She is just standing on the border; one step and she becomes the ultimate in consciousness. But she is not aware because this is just some freak of nature."

Her tryst with numbers started at a very young age. Her father who was a trapeze artist and a magician of sorts, used to show her card tricks. But he soon noticed that baby Shakuntala had extraordinary memorization powers and managed to beat him purely by remembering the cards. Being a showman himself, he immediately saw great value in the ‘mental circus’ that she could do. And he set about getting her to display her skills to the world. At the age of six, she showed her prowess at the Mysore University. Thus continued a saga of shows around the world, which was just discovering the computer and was in awe of a man-made machine which could calculate in seconds and minutes what it took the human brains few minutes or hours. When Shakuntala Devi beat the fastest computer of that time she had attained the peak of her famed career.

However, like many other prodigies, this fame came at a cost. Though she would have loved to have a formal education and go to school like other children of her age, she could not pursue one for long, given the ‘tours’ and ‘shows’ she had to give. The money she brought was the bread and butter for the family. Talking to Gita Aravamudan, a writer, who met her in the 1970s, she recollected her miserable childhood when she craved to go to school but her family had discovered her uncanny gift for numbers.  From the early age of three she was pushed into performing circus tricks with math by her father. At one point, she even ran away from home and disassociated herself from her family.

Nevertheless, despite the ‘pressure of performing,’ she did love numbers and believed that any child could develop a love for it provided it is presented in the right way with the right techniques. She reasoned that the brain could be made to function better by using it more. Talking to a reputed national daily in 2008, she lamented that children today were not as sharp as they were about 20 to 30 years ago. According to her, technology was to be blamed to a large extent for this and she thought that ‘no child should be given access to computers till he reaches the university and has developed enough human mental skills.’ "The right age to start training children in mathematics is six," she said.

With her passing, India certainly has lost an evangelist for the most dreaded subject among students of mathematics. Her name though will continue to inspire those few who seek to conquer the world of numbers.⊕

Who plays traditional board games like alugulimane nowadays?
Well some enthusiastic people did just that this weekend in a board games tournament.

She started swimming for fun. Now she has an entire wall adorned with medals she has won. 15-year-old Arshitha Bharadwaj has big plans for the future.