In 1802, Alexander von Humboldt climbed towards the crater of Mount Chimbarazo in Ecuador, 20,480 ft. above sea level. It was believed then that this was the highest point any man had climbed; Mt Chimbarazo was then considered the highest (volcanic) mountain in the world.

It was many decades later that the height of the peaks of the Himalayas were established.
Mt. Everest (in 1852) at 29,002 ft. was the highest mountain in the world – nearly two miles above the spot at Chimbarazo where Humboldt stopped his ascent at 19,286 ft.

Humboldt, between 1799 and 1805, explored Central America and parts of the USA. He studied and recorded everything that crossed his path – the rivers, the lakes, the mountains. He studied the tribes in his journeys, the flora and fauna of the region and the geographical features such as the connection between the Orinoco river and the Amazon by a natural channel.

It was here that Humboldt saw a Rain Tree with a spread of over an acre. This tree (Samanea saman) is a tree all Bangaloreans are now familiar with. This tree was brought in from the New World as so successfully introduced into India that most Indians believe that it is an indigenous tree. One would have thought the work of Humboldt and his companions was the greatest survey being undertaken in the world at that time. Not so.

It was in our backyard in Bangalore and Mysore that the greatest surveys were undertaken. Three major surveys were begun in the region consisting of a Route survey, a Topographical survey and the Great Trigonometrical Survey(GTS).

In 1800 Dr. Francis Buchanan began route surveys of the country spanning Mysore, Canara and Malabar. This resulted in a classic three volume comprehensive survey titled "…the State of Agriculture, Arts & Commerce, The Religion, Manners & Customs, The History Natural & Civil & Antiquities… " which was published in 1807.

This great comprehensive Route survey provided geographical details of the countryside, the main arteries and furnished a preliminary reconnaissance for the other surveys.

The Topographical survey was carried out by Colin Mackenzie. Colin Mackenzie along with William Lambton fought in the fourth Anglo-Mysore war which resulted in the death of Tipu Sultan, the ruler of Mysore. With this it was a matter of time for the rest of India to come under the control of the East India Company.

He surveyed the Hyderabad territory including its famous diamond mines. The Survey of Mysore carried out by Mackenzie was the first large topographical survey in India covering 40,000 sq. miles and took nine years to complete.

Mackenzie’s technique consisted of establishing carefully determined positions, carrying out minor triangulations with individual survey parties, touring the ground, fitting in woods, rivers, physical features and all other details that go to making a map. 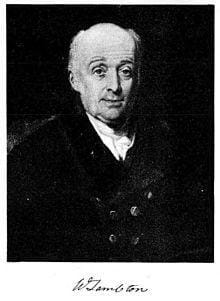 While Mackenzie & Buchanan were executing their surveys, William Lambton began his Trigonometrical Survey of India. After the Battle of Polilur (1780) where the British were roundly defeated, it was felt that a survey of the upland interiors of Mysore needed to be implemented to prevent the British from being ambushed in unknown countryside.

Lambton carried out a trial exercise (1800-1802) starting at Agara village next to Koramangala in Bangalore. A level piece of ground was selected and a chain,100 ft long of blistered steel, was housed in five wooden coffers each 20 ft long.

Brihadeshwara Incident
In 1807, Lambton had reached Tanjore. The summit of Brihadeshwara temple, i.e. the top of the Sanctum Sanctoram at 216 feet was chosen to form the apex of the triangle with the base line at ground level. In the process of winching the half a ton theodolite(geometric instrument) to the top, the guy rope guiding the movement of the theodolite snapped, swung and crashed into the tower. It is recorded that the theodolite was badly damaged (it took four months for work to begin again). However, the sculptures on the temple face seem to have survived undamaged.

The blistered steel chain consisting of bars 2.5 ft in length were connected to each other by brass hinges. The wooden coffers were supported on tripods with levelling screws. The coffers were also equipped with thermometers so as to make any corrections on the length of the bars induced by temperature changes.

The baseline starting at Agara was 7.44 miles long. Using this baseline after its position was determined, the triangulation began.

Placing a pole on a high eminence such as a doorg (durga) or the temple gopuram or a bamboo tower 30 metres long, a triangle was formed. Once the angle between the two ends of the baseline and the third point on the eminence was worked out the distances of the other two sides of the triangle were known.

The Indian who discovered Mt Everest

In 1852, a very bright Bengali employee, Radhanath Sickdar, first believed that he had found the highest mountain in the world, designated as Peak XV. It took many more years of accurate measurement to confirm this and it was named Mt Everest, by Capt Waugh, in memory of the Surveyor General, Mr Everest.

Then one of the other two sides of the triangle was used as a baseline and a new triangle was established. The measurement of Agara baseline which was 7.44 miles long needed the coffers and tripods to be dismantled and re-erected nearly 500 times.

It staggers the imagination to believe the kind of effort that was put into measuring the entire length of India from Kanya Kumari to Dehradun in the Himalayas (1600 miles)! The dedication of these early surveyors helped create an accurate picture of India which otherwise was unknown. More people died in executing these surveys than in the contemporary wars. 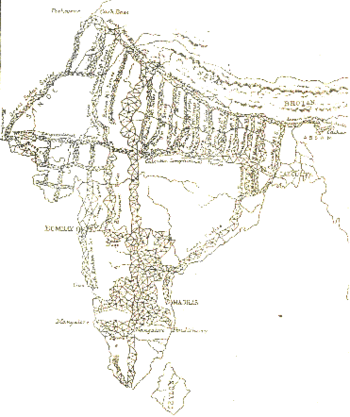 Then, Lambton began the Trigonometrical survey with a baseline from the Madras beach to St Thomas mount. On completion of this exercise, and reaching Mangalore, he found the distance from Madras to Mangalore was 360 miles – 40 miles less than the previously believed 400 miles. Peninsular India thereby lost an appreciable amount of real estate.

Later this survey continued from Calcutta into the Himalayas. For the first time it was known that the Himalayas were the greatest range of mountains in the world with numerous peaks over 20,000 ft and with Mt. Everest at 29,002 ft.

Everest became the Survey General of India after Lambton probably never saw Mt. Everest. But his contributions were hailed by Sir Clements Markham (a great geographer, explorer and writer) as "one of the most stupendous works in the whole history of science".

Lambton’s Trigonometrical Survey of India was a foray into Geodesy and would result in help establishing the shape of the Earth itself and its curvature at the pole and equator. When the Survey of India was over and the Great Indian Arc of the Meridian (the 78th degree longitude) was established the exercise took nearly 60 years.

The difficulties were immense, infectious diseases, malaria, tigers, leopards, snakes and scorpions, unfordable rivers everywhere, unknown territories, new languages – the list is unending. Yet, starting from the Mysore country and the Agara village near Bangalore, this stupendous work when completed was considered one of the greatest successful endeavours of science.⊕

About Vijay Thiruvady 1 Article
The author has not yet added any personal or biographical info to her or his author profile.

“We think too much and feel too little” goes a line in Chaplin’s all time classic – a brilliant insight into the human psyche by a brilliant filmmaker. Read more about the film and upcoming screenings in the city.

I come from a family that can only be described as bonkers. Come April, amma would ask (I wish I could capture the exact tone of the original Tamizh in English; alas, it’s not to

For an adrenaline filled day trip

From being called ‘savina durga’ or fort of death, the rock structure has transformed into a trekker’s delight.