Tiny birds -be it anykind- are truly the creatures that melt one’s heart. It is always a delight to see baby birds in the nests, with parents diligently flying around to get them food. Flowerpeckers are among the smallest birds in India. Here’s the heart-warming story of a tiny bird that was rescued.

We -a group of like-minded people – were on a nature trail on the Bannerghatta-Kaggalipura Road, when we found a Pale-billed Flowerpecker, which had been either pushed out of its nest, or had fallen from it before we could fly. Two young boys had picked it up, saving it from the stray dogs that were looking to gobble it up.

The little one was looking quite lost, but was able to peck at the grains the boys were offering it. We, too, did not want to interfere with the bird more than was necessary, so we went our way. 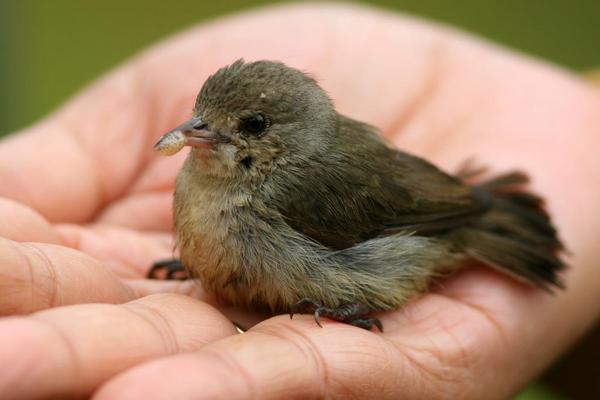 One has to be very careful while picking up wild creatures; very often, the fear they have of humans overrides their distress, and they panic when approached. Sometimes, birds, whose heart-rates are much higher than ours, can literally die of the shock.

We hoped that this was a rescue story which would have a happy ending, as the bird seemed able to feed, and had been saved from the predators. But as in all true stories, we never did find out the ending!

You can see them very often, especially in the Singapore Cherry trees which are planted near roadside restaurants on the outskirts of Bangalore.⊕

The godmother of hungry students

Mid-day meals was first introduced in a government school back in 1997 before it became a state government policy to implement it in all its schools five years ago. Meet Bhagya Rangachar who pioneered mid-day meal programmes.

If someone’s heart stopped beating, would you know what to do? A British nurse in Whitefield, with the help of Whitefield Rising, is teaching people what they need to do to provide timely help to victims.

Surveys and measurements that ‘shaped’ India

It was in our backyard in Bangalore and Mysore that the greatest surveys were undertaken. Vijay Thiruvady explains the gigantic efforts the British undertook while mapping India and the difficulties involved.