Recently unearthed details about the concessional agreement between the BBMP and Maverick Holdings show that the BBMP intends to hand over additional land to the firm but the BBMP is yet to inform its residents about it. Maverick Holdings is constructing a commercial complex as well as 1,512 low income homes at the site previously occupied by tin sheds housing low-income housing allottees, their tenants and squatters. But now the land previously allocated to pourakarmikas is also being handed over to Maverick Holdings.

In response to an RTI query, B T Ramesh, Chief Engineer of the BBMP, replied that apart from the 14 acres and 5.2 guntas already fenced off, an additional 1 acre 21 guntas of land is to be handed over to Maverick Holdings. Speaking to the press at Ejipura, Isaac Arul Selva of the Forum Against EWS Land Grab, who filed the RTI request, said that the BBMP has suppressed this information from the public. "Only through RTI we were able to get this information," he said. Selva said that almost none of the people living in the area were aware that their land was to be handed over to Maverick.

However, this was confirmed by B T Ramesh who is also the nodal officer for the project. He said that the BBMP is yet to inform the residents about the impending handover. "We will discuss with the residents and convince them to move to another location," he said. 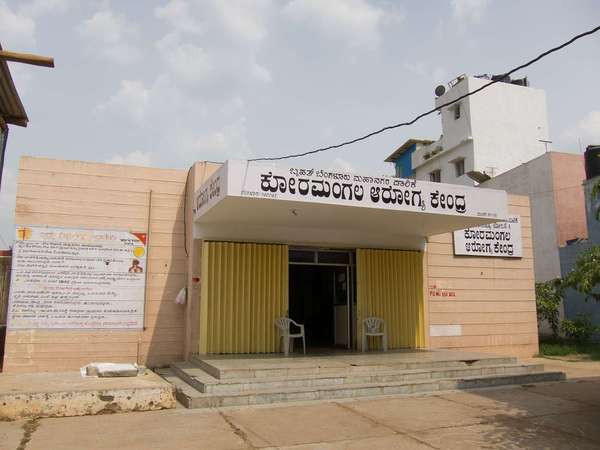 The residents living in the 1 acre 21 gunta land are BBMP pourakarmikas who were relocated here after the collapse of the pourakarmika quarters in Marenahalli in JP Nagar. Venkatesh, one of the residents living in the area, says they were unaware of the plans of the BBMP to hand over their land to Maverick Holdings. "We have been living here since 1996. We have titles for the land. We have even taken 15 lakh loan on the property. How can they hand it over to Maverick? " he asked.

Yogananda, a pourakarmika, shows the sale deed that handed over the site to him Pic: Sriram V

According to Yogananda, another pourakarmika, around 97 people from the Marenahalli pourakarmika quarters were given 18X20 site each on a lease-cum-sale basis and the corporation lent them money to build houses. He said that though the land was inside the compound of the erstwhile EWS quarters, they had full titles to the land. Yogananda showed this reporter a sale deed executed by the BBMP on March 2012, handing over the site to them. "It took us a lot of time to settle into this area. We have spent all our savings on building this home. We are not going to let someone come take it from us. If that were to happen, all the pourakarmikas in the city would go on strike," he said. 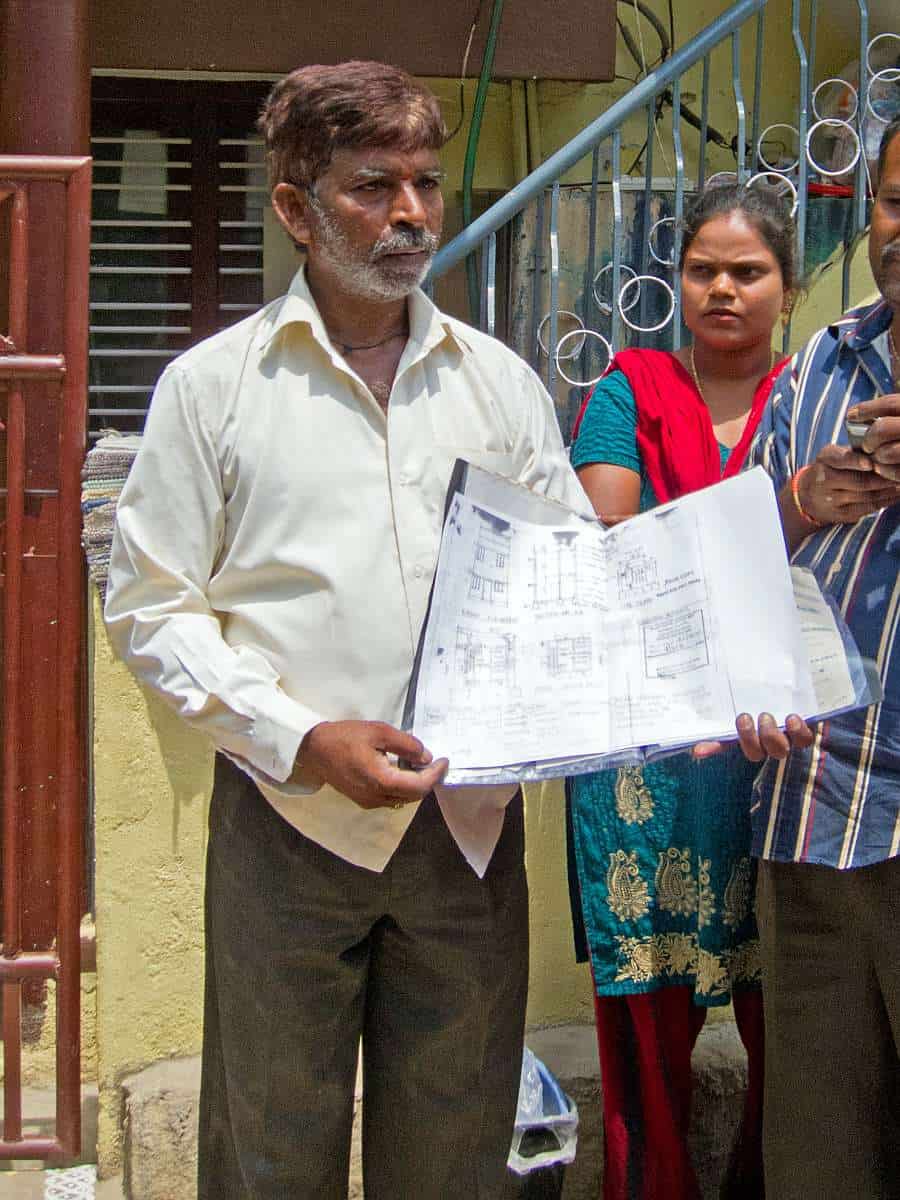 Venkatesh, a pourakarmika residing in the to-be-handed over land Pic: Sriram V

In its reply to the RTI, the BBMP says that the land is to be handed over to Maverick Holdings in two parts (see map). Part I is 14 acres and 5.2 guntas which has already been handed over by the BBMP to Maverick. Part 2 is 1 acre and 21.08 guntas which is yet to be handed over. But local corporator S Vijayan of the Congress who turned up with his supporters said that no more land would be given to Maverick. "All the development will happen only in the vacant land which has already been fenced off. Our MLA (N A Harris of the Congress) will not let them demolish these houses," he promised. Vijayan said that if such an agreement exists then it would be cancelled.

Prabhakar, member of the Forum Against EWS Land Grab, said that according to the map obtained as part of the RTI, the Koramangala primary health center falls within the first 14 Acre 5 guntas already handed over to Maverick. "The PHC serves around ten thousand people living in the cluster of slums surrounding it. If that land is also handed over, people living here will have no public hospital to go to", he said.

BBMP Chief Engineer B T Ramesh, when asked about the fate of the PHC, said that a final decision on whether to move the PHC is yet to be taken. "As the PHC serves a lot of people in the neighbourhood, we might decide to retain it," he said.

We will seek relief: Uday Garudachar

When Citizen Matters sought the views of Uday Garudachar, the then-Managing Director of Maverick Holdings, he said that as per the judgement of the High Court the BBMP has to handover the extant of land submitted in their affidavits which is 15.64 acres.

"If they are unable to handover the entire land then it would be considered a breach of trust; we’ll seek necessary relief from the courts". When told that the residents claimed to have
titles for the land, Garudachar said that they were free to contest the handover if it was so. "We have agreed to construct 1512 houses and maintain them for 30 years. If they have legitimate titles for the and and the BBMP cannot transfer the land, we’ll have to seek necessary compensation from them" he said. Garudachar said these issues were being raked up to damage his election campaign. "People are trying to make an issue of this because I’m contesting" he added.⊕

With summer looming ahead, learn about RWH and Borewell recharging from this workshop. Understand how to get et your STP working right and gclarity on government regulations. On Saturday, February 25th.

Bangalore yet to gear up for direct transfer of LPG subsidy

The Direct Benefit Transfer of subsidies will start in Mysore and Tumkur on June 1; the scheme will reach Bangalore soon. Is the capital city ready for the implementation of the scheme?

State govt admits to having amended the master plan, in the hearing of the writ petition filed by Citizen Action Forum asking the High Court to quash the amendment.