A recent High Court verdict has brought relief and hope to residents of several Sobha Developers-constructed gated apartment communities in Bengaluru. One of them is the Sobha Amethyst community in the Kadugodi-Kannamangala area north of Whitefield. Their layout has two civic amenity (CA) sites, and one of them is near the entrance. Because of present BDA rules, residents were worried that the authority could lease out this CA site to commercial interests that may disturb their community.

So the owners’ association decided to apply to lease the CA site back from the BDA, to keep it in their control. And here came the shocker: As per the BDA rules, owners would have to cough up a steep fee in the range of Rs.30 lakhs to the BDA, says the association. 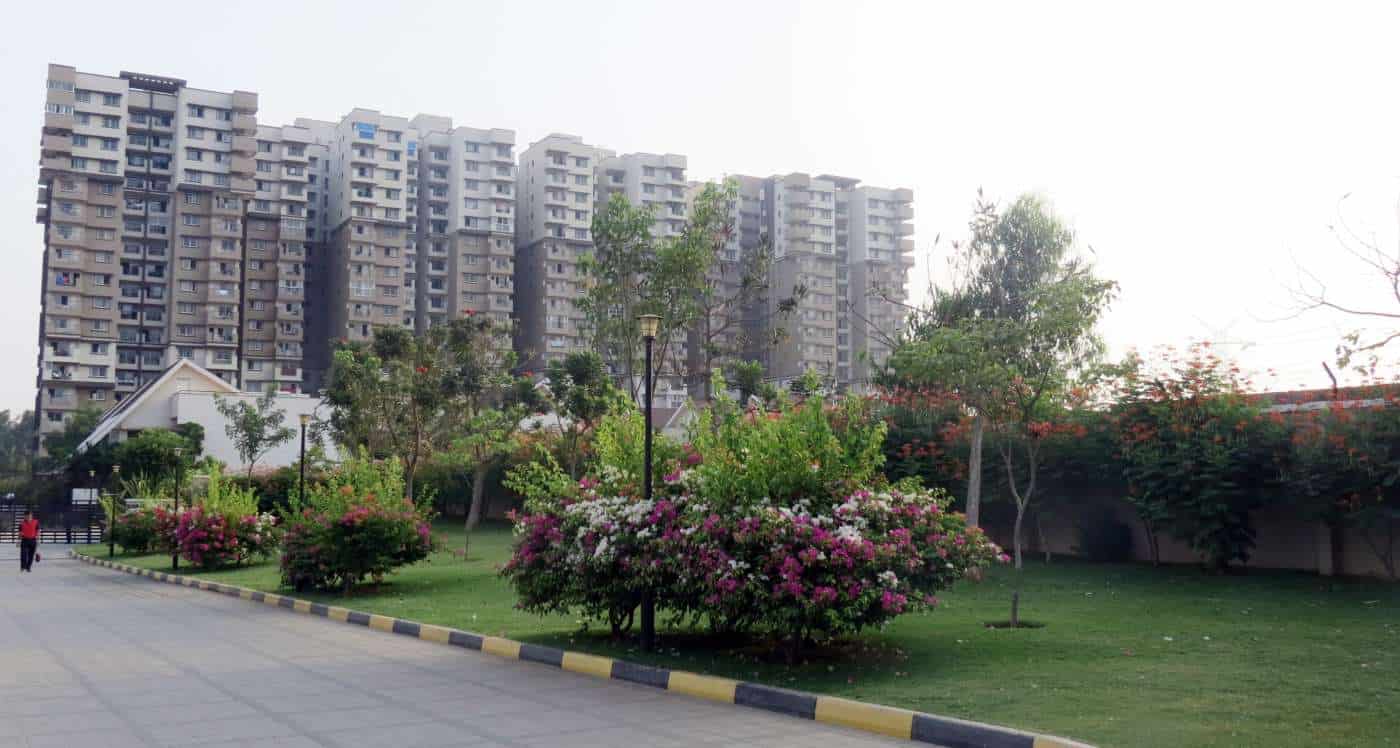 The long patch of green along between the wall and paved area is about 1000 square metres in area. This is the CA site that Sobha Amethyst owners association can now take over from the BDA without paying a steep lease fee. Pic: Venu Bhaskar Reddy.

But a High Court verdict on 5 March 2013 has changed all this.

In delivering his judgment order to a petition by Sobha Developers, Justice Anand Byrareddy brought additional clarity to the status of CA sites. CA sites are demarcated by developers as required by the Bangalore Revised Master Plan 2015 (RMP-2015).

What is a civic amenity site

The question of whether CA within the so-called ‘gated communities’ can be used for the same types of activities as public CA sites are used for, is not yet clearly resolved in Karnataka law. This is because gated communities themselves are not defined explicitly in state law.

This High Court verdict only resolved the issue of BDA charging steep lease fees when owners associations try to lease CA sites from the BDA.

This particular case was to resolve the question of whether the BDA can charge a lease fee for the handover of the CA site to the Resident Welfare Associations (RWAs) for maintenance. Justice Byrareddy ruled that the BDA is not entitled to charge any such amount under the terms of the RMP-2015. Bengaluru’s RMP (also called the CDP or comprehensive development plan) was notified by the state government in 2007 and the current plan runs till 2015.

Sobha Developers filed the writ petition over five specific properties in Bengaluru: Althea, Azalea, Adamus and Amethyst, all apartments and Sobha Lotus, a villa property. The builder developed all these properties in between 2006-2010 according to plans sanctioned by the BDA. Althea and Azalia are located in Harohalli village near Yelahanka, while Amethyst and Adamus are located in Kannamangala near Kadugodi. Sobha Lotus is located close to Brookefield, a neighhourhood adjacent to Whitefield.

As required by the plan sanction under the conditions laid down in RMP 2015, Sobha Developers had transferred the areas for civic amenity sites, open spaces and park areas to the BDA by executing relinquishment deeds. After completion of development of the projects, the developer approached the BDA for re-allotment of the civic amenity sites so that they could develop those and hand over to the resident associations for maintenance.

Sobha’s petition states that when their repeated requests for the allotment for civic amenity sites did not result in a response, they first filed a writ petition on 16 August 2011 at the High Court to force the Authority to act. As a result of the court’s ruling on that petition, the BDA issued allotment letters on January 2012, but on lease for a period of 30 years, along with a demand for payment of lease either as lump sum or in yearly installments.

This is where the story took a noteworthy turn. Sobha Developers argued that the RMP-2015 rules do not stipulate lease payments. The firm also asserted that the BDA had wrongly invoked the civic amenity allotment rules published in 1989 under the BDA act. In the meantime, the developer was being pressurised by the residents to develop the civic amenity sites as contractually obligated. This was the motivation for Sobha Developers to go to the court again, to challenge the fees and remove obstacles to the transfer of the CA sites.

The RMP has specific regulations for what is called Residential Development Plans (RDP). A Residential Development Plan is defined as a plan containing a proposal for construction of one or more buildings on a plot measuring 20,000 square meters or higher. 20,000 sq.m is a trifle less than 5 acres. Hundreds of gated commnunities in the city consisting of apartments or standalone homes or a combination of both, have all received BDA sanction under RDP rules.

1. 10 % of the land shall be reserved for Park and Open space. The open space (park) shall be relinquished to the authority free of cost and the same may be allowed to be maintained by the local residents association (registered), if the Authority so desires.

2. A minimum 5 % of total plot area shall be provided for Civic Amenities and the owner or developer shall develop such civic amenities which finally shall be handed over to the local residents’ association for maintenance. The mode of such handing over shall be decided by the authority.

A bit of legal history

A perplexing aspect of Sobha Developers’ petition is that it seems to cover the ground that has already been ruled upon. On 28 March 2011, Golden Gate Properties had filed a writ petition against the BDA on the same issue of CA site handover. Justice B V Nagarathna, after a thorough review of relevant provisions in the rules of the BDA Act, the Karnataka Town Planning Act and RMP-2015 ruled that only the terms of the RMP-2015 are applicable.

In fact Sobha Developers’ own first petition, referred to earlier, was disposed of by Justice Nagarathna with the same directions to the BDA, as in the case of Golden Gate properties. It is because the BDA then proceeded to charge a steep lease fee that the issue came back to the courts.

The implications of Justice Nagarathna’s original judgment were several fold.

First, for all properties sanctioned by the BDA as Residential Development Plans, as far as parks and open spaces as well as civic amenity areas relinquished to the BDA, the provisions of the RMP-2015 apply.

Therefore, 10% of the land is to be reserved for park and open space while 5% for civic amenities and are to be relinquished to the BDA free of encumbrances. There is a provision for the BDA to allow a registered local resident association to maintain the parks and open spaces. The civic amenities have to be developed by the developer and handed over to the local residents association for maintenance.

Second, CA sites cannot be leased as per the BDA’s rules of 1989, i.e. the steep lease fees do not apply.

This is why it is surprising that Sobha Developers had to file yet another writ petition to force the BDA not to charge any lease fee.

In his ruling this year, Justice Anand Byrareddy quoted extensively from the earlier judgments and added some more explanation. He explained that the requirement of relinquishment of area to the BDA is to ensure that the areas (parks, open areas and civic amenities) are compulsorily maintained and not disposed of later for private profit.

The provision of giving the authority the discretion to decide the mode of transfer of the civic amenity to the residents association, the justice ruled, is only to specify the conditions for maintenance and to specify the terms and conditions on which said amenity could be open to the public.

The justice also craftily brought the ‘gated community’ angle that hitherto has not emerged in the courts directly. He observed that the local residents (or buyers of the main developed property) would have paid for the development of the common facilities as part of the cost of acquiring the property. He also observed that these residents would also pay property tax for the structures developed. Therefore, the move of the BDA to collect any payment in the form of lease rentals, or deposits or surcharges was held to be untenable in this case, he wrote.

The court also ordered BDA to refund any amount collected, within 15 days of the passage of the order.

Now, there are three separate judgments from the High Court of Karnataka removing any confusion that open areas, parks and civic amenities in Residential Development Plans are to be governed by the regulations given in RMP-2015 and not any other BDA rule.

The judge clearly rules that the intent of the RMP is to allow maintenance of parks, open spaces and civic amenities by the local resident association with conditions imposed on them by the BDA, as owners of the relinquished area on manner of maintenance and conditions for access to the general public. Owners and residential associations of such communities will find this ruling extremely useful to resolve any pending disputes with the BDA on such matters.

Clearest proof of this comes from Venu Bhaskar Reddy, 37, president of the Sobha Amethyst and Adamus Apartment Owners’ Association. With this verdict, Reddy says they will now apply for the transfer of the CA site to the association’s name without having to cough up a steep amount in the range of Rs.30 lakhs.

“Overall we are happy with the verdict as we don’t have to shell out huge sums of hard earned money”, says Reddy, speaking to Citizen Matters. He also pointed one thing that is a common worry for many owners associations in the city’s gated communities with CA sites. “This ruling also brings some peace of mind to us against general perception that any private organisation can lease these sites from the BDA in the name of developing civic amenities and establish commercial spaces.”

Join the ‘Save Bangalore’ bandwagon

Over a glass of complimentary lemonade, they struck conversations with Bangaloreans about various issues such as cyclist and pedestrian rights, dwindling public spaces and reducing greenery.