All wards in Yeshwanthpur constituency are recent additions to the BBMP. This is a large constituency which also includes villages outside the BBMP limits. Hence many areas lack basic facilities compared to old BBMP areas.

Kengeri railway station and Kengeri satellite town come under this constituency. It also has many industries. NICE (Nandi Infrastructure Corridor Enterprises) ring road and BMIC (Bangalore Mysore Infrastructure Corridor) passes through the constituency. There have been protests about NICE Ltd acquiring more road than is required, and using it to build private layouts.

There have been various court cases on this; but in a recent affidavit, the government mentioned that NICE had indeed acquired additional land. BMTF (Bangalore Metropolitan Task Force) was investigating this, but last month, High Court stayed BMTF’s proceedings in the case.

There are five wards in the constituency – Hemmigepura, Dodda Bidarakallu, Herohalli, Ullalu and Kengeri. No specific party has dominance here. Hemmigepura and Kengeri have BJP corporators, while Herohalli and Doddabidarakallu have JD(S) corporators. Ullalu has a Congress corporator.

The main issues here are lack of water supply and sewerage system, especially in the villages. Borewells are dug randomly. In areas like Balalji Layout and Kanakpura Road in Hemmigepura ward, manholes are often blocked and not cleared. Stagnant water causes mosquito menace in Nagadevanahalli and Sir Visveswaraya Layout. 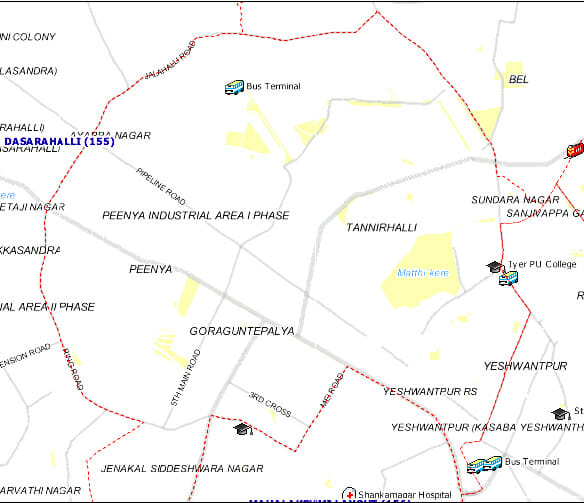 Road facility is poor, and so is bus connectivity. There are very few buses that go to Banashankari 6th stage, Hosahalli etc., and their schedule is erratic. Though BDA has developed layouts here, many of them – such as Vrushabhavathi Layout – don’t have proper road or sanitary lines.

The MLA here was Shobha Karandlaje, former Minister of Energy, and Food, Civil Supplies and Consumer Affairs. Shobha had resigned from the cabinet and joined the KJP last year. She is contesting from Rajaji Nagar constituency now. KJP is not fielding anyone from Yeshwanthpur this time.

During her tenure, Shobha had initiated a drive to weed out illegal LPG connections. Though the drive succeeded in removing many illegal connections, it also caused much confusion and complaints from the public about legitimate connections being removed.

There are six independent candidates. To view the serial numbers of all candidates and symbols of all parties, click here.⊕

Signal free corridors have been given a boost by the state government, by allocating 618 crores in the budget. If you own a property on this stretch, there is a chance it may be acquired.

Learning Kannada: It’s not as tough as you think!

There are many online and offline resources that help you learn Kannada language. Bangalore also has many classes where one can meet people and learn the language.