What time are the booths open?

Polling starts at 7am and ends by 6pm.

How to find your polling booth?

To find your name on the rolls and print the details, do the following:

On May 5th, take this printout to the polling station mentioned in the popup box with any of the IDs whose copies you submitted while registering.

When you go to your polling booth on 5th May with your voter ID card, there is a chance that the details in your card don’t match those in voter list. The serial number, name, and address may differ, but not the EPIC number.

Insist on searching the rolls if your record is not found with ease. Don’t return without casting your vote. If you can, check your record by:

What if I don’t have an EPIC card?

People whose names are the voters’ list this month can vote on 5 May, even if they have not received the voter ID card.

What ID proofs can be shown?

Those who don’t have EPIC can vote with any of the documents (issued before March 31) that the EC has specified, as was the case in the last elections also.

How to find my constituency?

Click here to locate your Constituency on a map.

Who are the candidates standing for election in my constituency?

We have listed all the candidates in each constituency and their backgrounds, including assets and criminal cases against them, with the Net Citizen Tool.

You will also find detailed articles about each constituency, which explains the issues in each neighbourhood, the performance of the sitting MLAs and the background of the wanna-be MLAs.

Don’t forget to check out the interviews with a number of candidates. Do your research and select the best.

If you really really find it impossible to choose a candidate, the 49-O can help you. Click here to read more.

The law enables a voter to decline casting his vote at the last stage. If you decide not to cast your vote after having signed on the Register of Voters and after having received the voters’ slip from the Second Polling Officer, you must inform the Presiding Officer immediately. He will then take back the voters’ slip from you and proceed to record in the remarks column of the Register of Voters that you have declined to exercise your franchise and you will be required to put your signature under such entry. After this is done, you can leave the polling station without proceeding to the Voting Compartment. (Src: CEO Karnataka) 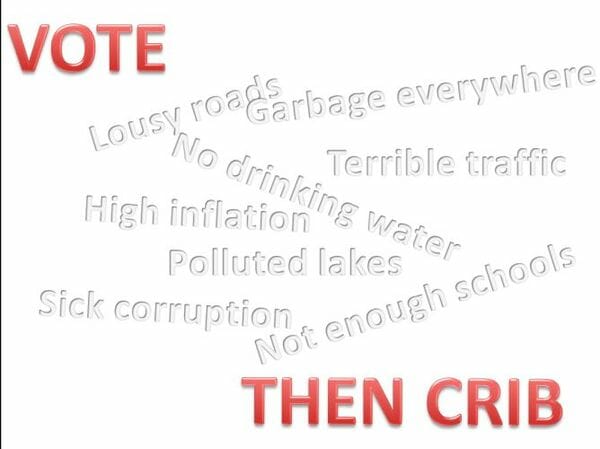 What is the process of voting? How do you go about it?

When you reach the polling station, entry will be regulated by queues. There will be separate queues for men and women voters and the physically handicapped persons. The persons who enforce the queues will allow 3-4 voters into the polling station at a time. Physically handicapped voters and women voters with babies in arm will be given precedence over the other voters in the queue.

Stage 3: You will then proceed to the Third Polling Officer who will take the voter’s slip issued to you by the Second Polling Officer. The Third Polling Officer will press the "Ballot" button on the Control Unit of voting machine and direct you to the voting compartment where you will record your vote on the balloting unit of the voting machine. Please note that each voter will proceed to the voting compartment in exactly the same sequence in which his/her serial number is recorded in the voters’ register.
10.6 Stage 4: Voting Procedure.

You must remember that secrecy of voting is important. Every elector is expected to maintain the secrecy of voting and in case of failure to maintain secrecy the elector may not be permitted to vote. Any person who violates the secrecy, will be booked for an offence under Section 128 of Representation of People Act, 1951. You should, therefore, not disclose to any person who you have voted for. Similarly, if any election official attempts to obtain information on who you have voted for, it will amount to an offence committed by that official. Photography of a voter casting vote is prohibited. It may also be noted that no polling official or agent can come inside the voting compartment under the pretext of helping you to vote. You can, however, be permitted to take a companion of not less than 18 years with you for recording your vote, if for any physical infirmity you require such assistance.

What happens if someone else has cast the vote in your name?

If the First Polling Officer tells you on arrival inside the polling station that your vote has already been cast, bring this to the attention of the Presiding Officer immediately. The law allows you to cast a Tendered Vote. A Tendered Ballot Paper, as per Rule 49P of the Conduct of Elections Rules, will be given to you and you will be required to sign your name on the list of tendered votes. A tendered ballot paper is the same as the ballot paper displayed on the balloting unit, except that it shall be endorsed on the back, with the words, “Tendered Ballot Paper” either stamped by the Returning or written by the Presiding Officer at the time of issuing it.

After marking your choice of candidate with the help of Arrow Cross Mark rubber stamp you should hand over the tendered ballot paper to the Presiding Officer, who will keep it in a separate cover. Please note that in such case, you will not cast your vote on the EVM.

How to re-register your vehicle in Bangalore

Looking to bring your vehicle from your home town into Bengaluru? No matter which part of the country you are from, rules for the re-registration are the same across India. Here’s a quick guide.