Bangalore South Assembly Constituency is one of the largest in Karnataka, it consists of more than 4.1 lakh voters (an increase from 3.74 lakh voters in 2008) and comprises of the following BBMP wards: Gottigere, Konankunte, Anjanapura, Vasanthpura, Uttarahalli, Yelchenahalli and Begur. The constituency also includes five zilla panchayats and 10 gram panchayats. There are industrial areas (including Jigani), the Bannerghata forest, neighbourhoods with highrise apartments as well as smaller villages that got merged with greater Bengaluru. 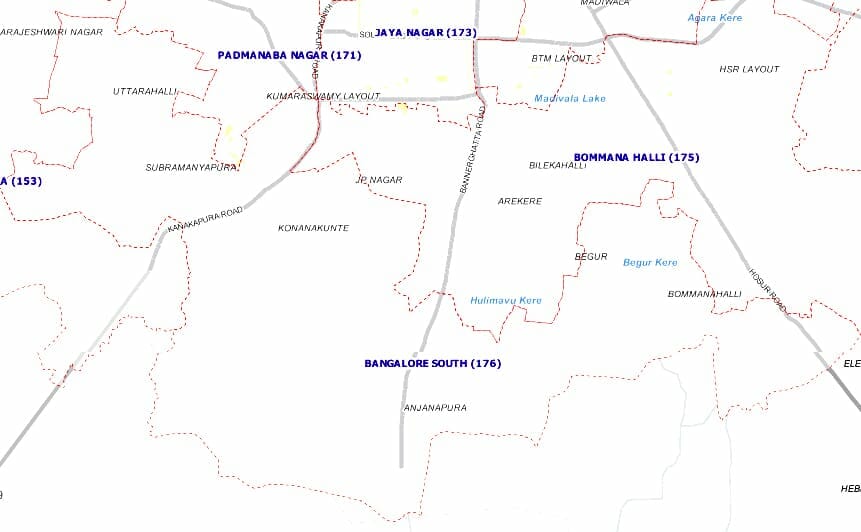 M Krishnappa is a former Zilla Panchayat member. He secured the seat in the 2008 elections by a huge margin of more than 20,000 votes against M Sadananda of Congress. He has been a party worker with the BJP since 1983 and has been part of his elder brother M Srinivas’s (BJP MLA from Rajarajeshwari Nagar) election campaigning efforts in the past. He has also been credited for his work with lakes and for the flyover at Uttarahalli, however, he has been criticized for the lean of the asymmetrical development towards the affluent classes of the constituency.

Congress is fielding the journalist-turned-politician Dr. Tejaswini Gowda, former Kanakapura MP during 2004-09. Previously a journalist who hosted the chat show ‘Mukha Mukhi’ in Udaya TV, her political career started with after the hit programme where she interviewed several politicians, and developed immense popularity among the masses. She saw instant success when she won on a Congress ticket during the 14th Lok Sabha elections from Bangalore-Rural Constituency against former prime minister H D Deve Gowda of JD(S) and Ramachandra Gowda of BJP-two senior politicians. Even though she is perceived as an active politician, it should be noted that she used a mere 26.5% of the MPLAD Funds given for the constituency during her MP tenure.

R. Prabhakara Reddy, 42, JD(S) is a BSc graduate from VV Puram College, Bangalore. He is a real estate developer known for creating residential layouts, and gated communities across Begur, Mylasandra, Jigani, Anekal and other localities across Bangalore. He is also among one of the richest candidate contesting 2013 Assembly elections, with total assets of more than Rs 208 Crore. He also possesses 10 cars in his household including a 2012 Land Rover.

The common grouse of residents of the constituency concern the neglected state of public works and utilities. Lack of street lighting and crime is an issue in Gottigere, Begur and Anjanapura; while water and garbage disposal system is a common issue throughout the constituency.

About Basavanagouda Patil 2 Articles
The author has not yet added any personal or biographical info to her or his author profile.

If you are one among the lakhs of voters of Rajajinagar, this is what you need to know! Background information Understand the role of the MLA Learn all you can about the candidates: see below

As the number of COVID cases rose sharply over the past week, authorities are making more preparations. Read more in our weekly news roundup.