Rajaji Nagar was among the first few ‘planned areas’ in the city. The size of this constituency is about 5.5 sq km. After remaining a traditional, residential area for long, there has been haphazard development here. Many residential areas have commercial developments now; unplanned growth and illegal buildings is an issue.

This area has many educational institutions, hospitals and temples. Rajaji Nagar Industrial Area houses many large and small industries.

The constituency is BJP-dominated – six out of seven wards here have BJP corporators. The wards here are Dayananda Nagar, Prakash Nagar, Rajaji Nagar, Basaveshwar Nagar, Kamakshipalya, Shivanagara and Sriramamandir. Of these, only Dayananda Nagar has a Congress corporator.

Rajaji Nagar, Basaveshwar Nagar and Sriramamandir wards are better developed and have more of middle class population. However, water shortage is a problem here. "Rajaji Nagar 5th and 6th blocks suffer from acute water shortage now. Residents have to buy tanker water every 4-5 days by paying Rs 400-500," says Ravinandan B B of the civic group Save Bangalore Committee. 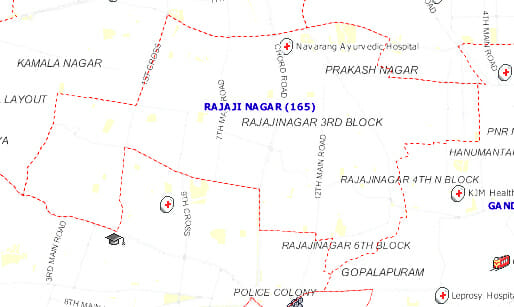 In Rajaji Nagar 6th block, cross roads have not been asphalted for the last 2-3 years. Many roads have been dug up for Metro rail works for long, and have not been repaired. Recently BMRC (Bangalore Metro Rail Corporation) itself asphalted the Mahakavi Kuvempu road following public pressure.

Dug up roads, along with chaotically parked vehicles and encroachment of footpaths by street vendors, have been obstructing traffic. Old and damaged sewage lines is another problem in the constituency – in many areas, sewage water leaks out from damaged pipes.

There had been demand from citizens to improve Okalipuram Road which leads to Majestic railway station. According to a Times of India report, foundation stone for this project was laid in December. With this, Okalipuram Road will become an eight-lane corridor, which is supposed to make the commute from Rajajinagar to Majestic easier.

I expect Shobha Karandlaje can give optimum performance, she has the capability to transform society.
– Avinash, engineer at IAF

A study by India Governs Research Institute states that Rajaji Nagar is among the constituencies that got the least amount of education grants from the state government from 2008 to 2012. The average grants for School Development and Teaching Learning Material (TLM) was over Rs 1 crore for constituencies across the state.

The elected MLA should bring in more employment opportunities for individuals like him. Congress might help achieve this.
– Amjad, salesman

Suresh Kumar is one of the few ministers with a clean image in the BJP government. He held the portfolios of urban development (excluding Bangalore city, but including BWSSB), and law and parliamentary affairs. He is a law graduate and three-time MLA. 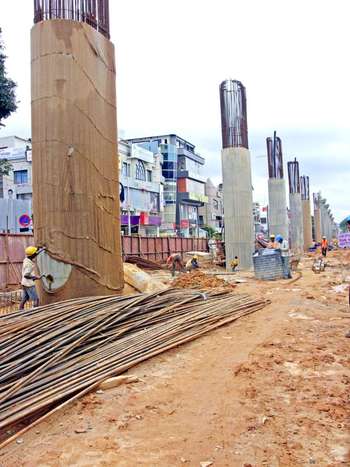 Roads in Rajaji Nagar have been dug up because of Metro rail works. File Pic (representational picture)

He had spent Rs 2.7 crore from his MLA Local Area Development (LAD) funds as of mid-February 2013, as per RTI information. MLAs get LAD funds of Rs 5 crore overall. He has set up a dialysis centre in Rajaji Nagar 2nd block using his LAD funds – the centre gives dialysis to BPL patients for free, and to other patients at low cost.

He has initiated discussion on the BMRGA (Bangalore Metropolitan Regional Governance Act) which proposes greater decentralisation, longer term for Mayor, and formation of Metropolitan Planning Committee for the city.

He was accused of getting a G-category site even as he had an existing site. Kumar submitted his resignation to the then-Chief Minister Sadananda Gowda post this allegation, but withdrew it after the state Attorney General spoke in his favour.

Currently there is a court case against him, filed by the BMTF (Bangalore Metropolitan Task Force). The case is that Kumar had denotified land that was meant for housing for economically weaker sections, to favour an individual. There are eight IPC counts against him in this case, which includes three major ones (IPC 406, 409 and 420 – criminal breach of trust, criminal breach of trust by public servant, and cheating and dishonesty inducing delivery of property, respectively).

There are nine independent candidates too, taking the total number of contestants to 25. To view the symbols and serial names of all candidates in Rajajinagar, click here.⊕