A constituency situated in north-east Bangalore, Pulikeshinagar has been reserved for Scheduled Castes (SC’s). It has seven wards where the major population is the low and middle income category in some parts like Richards Town. Considering the linguistic and religious diversity in the area, it is not surprising to find that election campaigns are being held in Tamil, Hindi and English apart from Kannada.

The constituency which has small commercial establishments in addition to residential neighbourhoods, has a total 13 contestants including three independents. 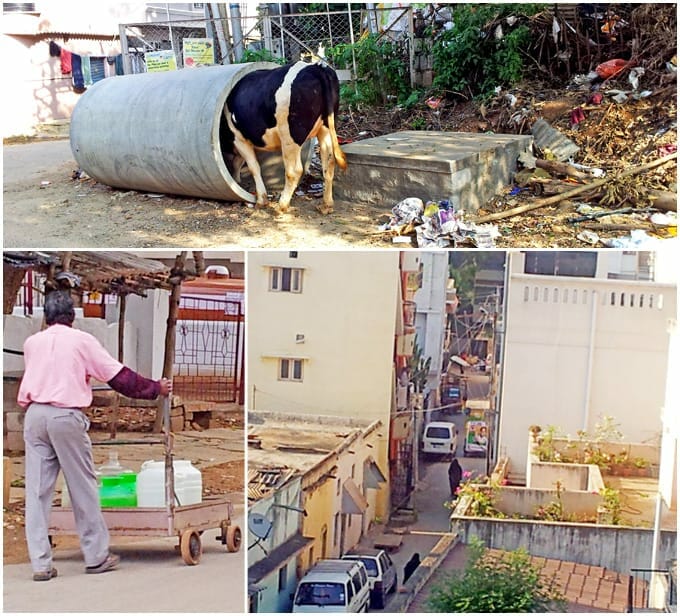 Mohen S, a techie and resident of S K Garden ward, explained the problems: "Speeding vehicles, burning of garbage and shortage of groundwater are the major challenges. Further, cars of different sizes are parked throughout the day and night in residential localities making it tough and dangerous for pedestrians to use the roads in the absence of functioning footpaths".

Water: Many residents of Pulikeshinagar do not get water regularly even if private or public piped connections exist. The problem is acute in places like Devara Jeevanahalli ward and old

Bagalur layout in Sagayarapuram ward where lower and lower middle income families live. Households in the upmarket Binny Crescent in S K Garden ward or Cleveland Town in Pulikeshinagar ward tend to procure water from private tankers, residents frequently buy water at the rate of Rs 2 per pot. There are times when the BWSSB causes inordinate delays in repairing leaking pipes, thus wasting the precious fluid, despite constant reminders to the authorities. Appeals to the local corporator or MLA have not yielded much result. There is a shortage, salinity or absence of groundwater in many localities.

Irregular water supply and poor street lighting are the primary concerns for Maria, 45-year old domestic worker from Pulikeshinagar ward and mother of three. She observed, "Candidates who come to us for votes promise much. But they forget us and our woes later".

Sanitation: Sewage and stormwater drains are clogged and overflow especially when it in rains in Kaval Bairasandra and Devara Jeevanahalli wards. There have been instances of residents losing lives and belongings during the monsoon. The funds allotted for this largely remain unutilised.

Garbage: Mounds of garbage are common in Pulikeshinagar too, despite pourakarmikas doing their duty diligently. In fact, a lot of garbage is dumped on both sides of the railway track that runs through S K Garden, Pulikeshinagar and parts of the other wards.

Stray animals: Dogs and cows move around freely throughout the area, especially in residential neighbourhoods. However, complaints to the BBMP did not have much impact, according to H. Chhungi, a researcher and mother of three teenagers.

Housing and livelihood: During the past two years, stationery street vendors on Tannery Road and Pottery Road have been evicted without prior notice, alternate space or compensation, although some of them have returned.

The 2013 assembly election from this constituency has 13 candidates in the fray and includes three women and two independents.⊕

What are the key issues in Rajajinagar constituency? Who are the candidates this time? How has the incumbent MLA performed? What is the expectation of voters?

People protest against BMRCL’s recent move to cut down trees at Lalbagh for its Metro project. Read all about the saga, proposed alternatives and the legal angle.

Which party won the exit polls of BBMP election 2015? Here is the compilation of all exit polls.