Yogaiyah V C, 60 is contesting as the Loksatta candidate from Byatarayanapura. After schooling and college in Andhra Pradesh, he served the Indian Air Force for 15 Years, till 1988. After that he worked as Principal, a ALT vocational training college in Bangalore and as a consultant.

A member of the initial team ‘Corruption Saaku’ in December 2010 and active participant in India Against Corruption Movement in 2011. he toured the countryside, for campaign for a referendum for Jan Lokpal Bill during October 2011.

He is now the general secretary of Amrutha Layout RWA and has been working to solve water shortage problems, getting roads improved, fixing of streetlights, and power issues. 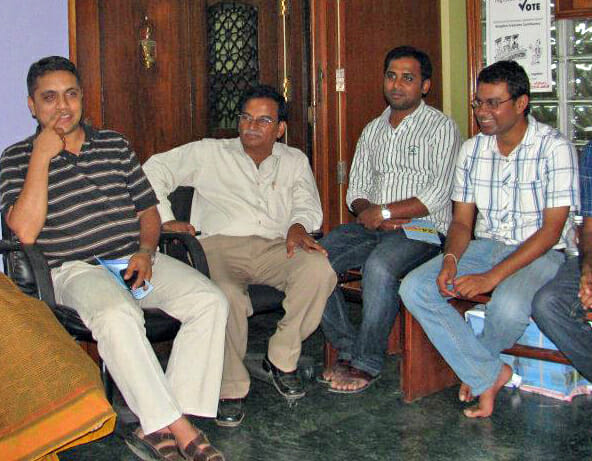 Wife Prabhavathi is a homemaker. Son Anil Kumar is a software engineer and daughter, Prathima is self-employed. He has declared total assets of 90 lakhs and liabilities of 12 lakhs. His key sources of income are his defence Pension and

Consultancy earnings. He has a case of cheque bounce filed against him, for insufficient funds under sec 138 of Negotiable Instrument Act in the year 2011.

Yogaiah says his budget for the campaign is Rs 4 lakhs. 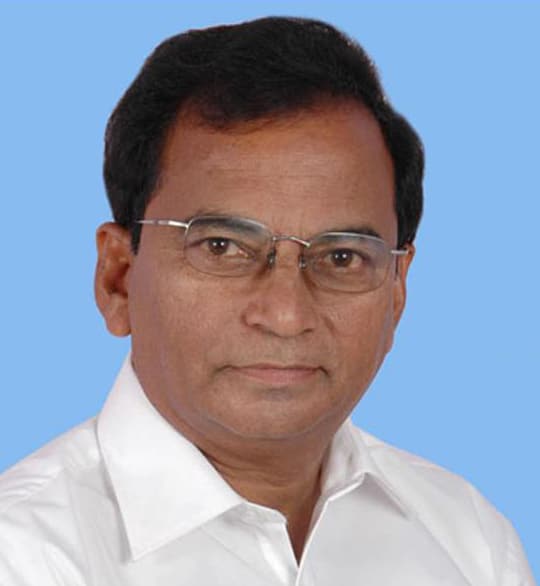 Byatarayanapura is a very vast area and most of the, area and people…. it’s underdeveloped. Especially issues of water, drainage and roads are very high. Primary health centres and primary education are in a very bad state, and public ration distribution is not in a orderly manner.

I have moved to this constituency in 2006. I was watching for 2 years underdeveloped conditions and most of the residents did not know how to solve this problem. After joining Loksatta party, I have mobilised all the people and asked them to form an association, and I took a lead to solve borewell water connections and also electrical and drainage problems. There was low voltage and there was a single phase connected, so we engaged with the authorities and changed it to three phase. so now the motors are running bore-wells are working properly. The roads were very muddy and you could not drive by car in rainy season, and with continuous persuasion, now they are asphalted.

For how long have you been contributing to the constituency?

Last 4 years I have been working there, and I’m a secretary for the association; the Amrutha layout resident’s welfare association. Now, it is well connected, and people are happy with all the basic facilities. Now Cauvery water connections have been given, and roads are getting tarred; that’s the development, I can say.

Why did you enter politics?

I was in defence, and ten years back, I came out of service, and I was busy with business and my life but, after seeing lot of changes in govt corruption and all, I couldn’t stay as a spectator; and I thought as a defence person, I should do something for the society, also.

That was the reason why I became a member of this association and started working for the society. And, then I saw the rampant corruption, and a govt we believed the best had also taken a very bad shape in Karnataka. I was looking for a party with ideals that I could be proud of, and then I found Loksatta party, founded by Jayaprakash Narayan who was an IAS topper, and he himself resigned and sacrificed for this country, and it matched my ideals, and so I joined this party. So, I want to stand for MLA, as, if I can solve the problems in my area, I can do so for a bigger area – and solve the problems here, too. I’m confident about that.

Is there any motivation/model figure for you to follow in politics?

I have looked and found Loksatta party founder JP and his ideals. He resigned and sacrificed for this country after working as a collector in Andhra Pradesh. I believe in service to all without discrimination of caste, creed, region or religion. Also, in Dr, Jayaprakash Narayan’s vision of empowering people and local governments – authorising local governments to solve local problems, and providing employable skills to all eligible citizens to enable them to live decently, self-sufficiently.

I was a part of the anti-corruption movement with Saaku and Anna Hazare.

So, where do you see yourself in the next five years?

If I win and become MLA. I shall continue my work for the Welfare of the people of my constituency. If I do not get elected, I shall keep working in my area towards bettering the lot of the common people/residents.

As I entered into politics, I should be in a position to solve all these problems; just merely being a member, it may not be possible to do all that I’m expecting to do for society. I’m definitely hoping to become a minister finally, so I can really take care of actual problems… and make rules for empowerment of the people.

I like reading and travelling. I travelled throughout Karnataka in my youth to understand people. I love that. Also meeting people and giving them encouragement about life and other things. I give counselling to the people who want to come up.

Interaction with the local residents in your area…

After my area people know me when I was RWA secretary… I solved problems, and they are very happy that I’m working for anti-corruption and transparency, and contesting these elections. We can improve infrastructure/roads, and the full taxpayers’ money can be utilised for the society. They were very happy and invited me to go ahead. The people are really happy that I can work better for them.

If you come to power will you guarantee that G category sites will not be misused?

G category sites will not be misused from my side. If there are really deserving candidates, and if it really has to be given to them as per transparency, we’ll announce and allot.

If elected will you support residential/commercial development in areas where there is neither BWSSB water supply, nor bore-well permission?

In residential areas, I oppose commercial setups because it will disturb the peace and tranquillity of the residents; after all they are also working elsewhere and want peace. If it is going to affect water and the other problems; we have to think about how to renovate the bore-wells and waterbeds, lakes, and improve the water facilities, so that the residents will be happy.

What about rain water harvesting?

Though the law has been made compulsory for certain sites, I wish that everyone should have rainwater harvesting, as it is a problem for everybody. Everyone should save water so that the waterbeds are renewed and bore-wells and lakes are renewed.⊕

About Pushpa S 1 Article
The author has not yet added any personal or biographical info to her or his author profile.

Are the authorities waiting for disaster to strike?

Ramagondanahalli-Borewell Road in Whitefield is fraught with danger – street lights that don’t work, giant potholes and more. A residents asks why the authorities have not responded to multiple cries for help.

If you don’t have your name on BBMP voter list, check it again!

Voter roll analysis expert P G Bhat says in his blogpost that finally State Election Commission and Chief Election Officer, Karnataka have synced their voter rolls and around 5,00,000 applications have been approved, and deletions made.