Abdul Azeem, 60 is a former Assistant Commissioner of Police, while also being a former MLC, from Hebbal. Now standing on a JD(S) ticket, Azeem has served under a gamut of leaders from all leanings. Retiring in 2004, when he still had nine years of service to go, Azeem stood for the Assembly polls that same year from Binnypet and lost. Azeem’s advantage is that he has lived and worked in the area, is better known and has a history of service.

However, his plans to resolve Hebbal’s key issues are sketchy, with talks of relegating growth to outside of Bangalore limits, just as he admits that there is no water to support commercial developments there. He shares his ideas of setting up a desalination plant to solve Hebbal’s and Bangalore’s water woes. Crime seems to be something that he has a handle on, vowing to ‘eradicate rowdyism’ in Hebbal just as he has in Bangalore. It will be interesting to see whether he can adopt a similar stance to land grab, illegal developments and infrastructural woes that plague Hebbal. 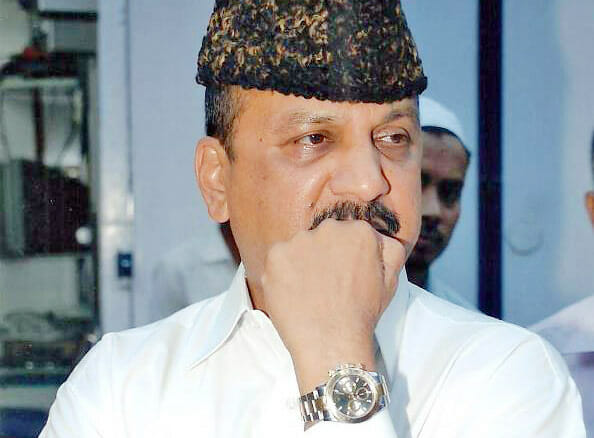 His family includes wife Sabeena Azeem, and sons Zeeshan and Zaidan. Zeeshan, a BBM graduate is helping his father with the campaign. Zaidan has just completed his second PUC in Presidency College. He has declared an total income of Rs 4.26 lakhs and total assets of 8.1 cr. His Facebook page can be accessed here.

Water shortage and water contamination are the major problems in Hebbal. This is the reason for jaundice to spread among the children. Particularly in Rahmat Nagar and Chamundi Nagar, in the slum areas, many children have died in the last two years and the government has not taken over. I have assured them that this subject would be taken on the floor of the house and pressure the government to replace the pipelines.

Number three, another important problem about 40% of the residents are living in BDA acquired land. Since 1986-88, for the last 30 years, the government has not given any kind of relief. If I am elected, I will bring this to the floor of the house to re-convey it.

I was Sub-Inspector of Police of 1986-90, I am fully aware of the problems. I have developed a lot of contacts- every second person is known to me. I am living here for the last 25 years. Since then, I am police officer in different police stations of Bangalore, and if people used to face any kind of problems, they would come to me. I entered politics in 2004 and became an MLC in 2006. Again people started contacting me for various kinds of help. So I’m very, very popular in the area and people know about my hardworking [sic], my sincerity, my honesty and my concern for the people of the area. So definitely people are going to vote for me.

Why did you enter politics? Is there any motivation/ model figure to follow for you in politics?

You see, I had hobbies before joining police. The moment I joined police, I am so much committed and dedicated in life, that every time people bringing their grievances, bringing their problems, they don’t allow me to sleep peacefully. You know that is the way of life. They won’t allow me to read the newspaper or see the TV. I am totally committed. The ideas developed in me are all because of the concern for the society. I am not free to have time for hobbies and all.

We’ve seen the mushrooming of private projects, massive cases of land grab and the consequential shrinking of public spaces, just as infrastructure is stagnant. What is your take on growth vs. infrastructure?

See, you might not have heard my speech earlier. In that I told that my plan was to decongest Bangalore. I am going to place my proposal before the government to create a new Bangalore beyond Yelahanka, between Chickballapur and Doddaballapur with all facilities like China. Ring roads, flyovers, hospitals, all facilities. So this Bangalore will also remain calm and quiet, while growth can go to the new Bangalore. So like that, we can stop demand here for the new projects and all.

And what about fixing existing infrastructure?

Infrastructure, you know, the first thing we need is water. People are facing scarcity of water and government has not planned properly. The fourth stage second phase Kaveri that we are due last year. In future, there is no plan. What I am thinking is that this water is sufficient for the next 10 years. Government should plan right now to take water and bring water from the sea, by putting a desalination plant. There is no other source. Hemavati also will not be able to provide any more water. Bangalore is a place that is not going to be closed tomorrow or day-after. So long as the sun and moon are going to be there, Bangalore will be there.

On the subject of water, if elected, will you support commercial or residential development in areas where there is neither BWSSB water supply or bore well permissions?

How would you plan to increase citizen participation and consultation?

I have already decided to start some kind of session where all the residents can participate and I am going to call all the bureaucrats, BWSSB, BBMP, BDA and some experts. I will allow the people to put forth their grievances, ask why this problem is existing, tell them when they’re going to do the job. So this kind of assurance I’m going to make to solve the people’s grievances.

One is people know that I am highly qualified. I am MA in Economics, I did my LLB. Two, I served the police department for 25 years. What service I did in that time? I made Bangalore a crime-free city, I eradicated rowdyism. People definitely expect that Azeem our MLA, if his party comes to power, he can definitely become the Home Minister. People are expecting a lot of things. They want peace to prevail in the areas. I can definitely make this area crime-free. I’ve got my own (ideas), let’s say, to set up neighborhood watch committee so the people can self-police themselves. All these kinds of things I have in my mind and I am going to implement.

I don’t support it.

What are your views on corruption in awards of contracts in public projects as well as land grab? How would you seek to address systemic corruption?

So what measures will you implement to ensure this kind of transparency in awards?

Whatever project we will take up, that will be brought to the notice of the public. I will ask the public to watch such projects. If you come across anything, any kind of filth in this, you can bring to my notice and bring to the government. That fear itself can solve corruption.⊕

Empty promises of politicians tend to be forgotten by the public, whose collective memory is temporary. Kathyayini Chamaraj lays bare the various facets of the BBMP election that was.

How about some serious French cinema for the coming weekend? Here’s a review on one of Jean-Luc Godard’s films, a teaser to entice you.

A resident of Byrasandra wonders how people on the road can turn a deaf ear to the noise pollution they cause.