Two of the city’s biggest engineering colleges, one of its biggest medical colleges, a former prime minister along with a Rashtra Kavi call Padmanabhanagar their home. Yes, PESIT, Dayananda Sagar, Deve Gowda and G S Shivarudrappa, along with Goddess Banashankari, reside in this constituency which includes much of Padmanabhanagar, Kumaraswamy Layout, ISRO Layout, Yediyur and parts of Banashankari, Basavanagudi and Jayanagar.

The incumbent and his promises

The incumbent is three-term MLA and Karnataka’s Deputy Chief Minister R Ashoka. First elected in a bye-election in 1997 from Uttarahalli, India’s largest assembly at that time, Ashoka was re-elected in 1999 and 2004. In 2008 when Uttarahalli was divided and seven new assembly constituencies were carved out of it, Ashoka contested and won from Padmanabhanagar constituency. Ashoka, who hails from the influential Vokkaliga community, became the state’s health minister in the JD(S)-BJP coalition government that came to power in 2006. After 2008, when BJP came to power on its own, Ashoka became the transport minister in the BS Yeddyurappa’s cabinet. In the cabinet reshuffle of 2010 Ashoka was given the additional responsibility of the powerful ministry of Home. And continuing to rise in the government Ashoka was made one of the two Deputy Chief Ministers in the Jagadish Shettar cabinet reportedly to placate the Vokkaliga community after Sadananda Gowda was removed from the Chief Minister’s post.

According to Ashoka, he has done much to improve the state of the constituency. He promises to do more. Click here to read full interview. 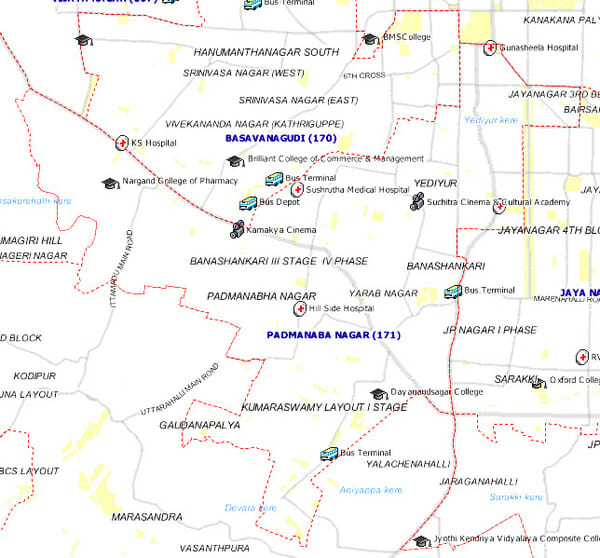 Brahmins and Vokkaligas form the major chunk of voters in Padmanabhanagar which explains the choice of candidates from the major political parties in the constituency. Ashoka who had the back up of his own caste plus could gather Brahmin votes – the traditional vote bank of BJP- won the last election by a margin of 31,000 over his nearest opponent MV Prasad Babu of the JD(S). This time there are 15 candidates in the fray. The JD(S) is fielding Dr MRV Prasad who is a popular doctor in the area and hails from the Brahmin community whereas the Congress is fielding new comer LS Chethan Gowda, son of veteran politician L R Shivaramegowda. According to some locals, the JD (S), by fielding Dr Prasad is attempting to woo Brahmin voters who have previously voted for the BJP. But dislodging Ashoka in this BJP stronghold will take some doing.

There is not a single government hospital or a public auditorium in the entire constituency. Apart from this, each ward has it own problems: Old and faulty sanitary lines in Chikkalsandra, Yediyur and Karisandra; lack of basic amenities in Hoskerehalli and Kumaraswamy Layout; heavy traffic in Padmanabhanagar ward and so on.

Residents in Padmanabhanagar complain about the ubiquitous mobile towers, overflowing manholes and about garbage being dumped in empty plots. Stray dog menace and irregular garbage clearance are also the regular complaints here as well as in Ganesh Mandir ward. Residents in Kumaraswamy layout complain about the Vasanthpura lake getting polluted with sewage water coming from adjoining areas. While residents of Yediyur ward experience shortage of water supply, people in the Banashankari ward complain about the poor state of Kanakapura Road near Banashankari temple.

Metro launch by March, fares out in a week

There are many questions raised on the pace at which Namma Metro is being completed. What is really in store for 2011? An update.