With over two lakh voters, the traditional neighborhoods of the Mahalakshmi Layout constituency are a hot spot for commercial activities too. Narrow roads and water supply shortage have been the foremost issues left unresolved by the incumbent and earlier elected leaders.

Abutting the major localities of Yeshwantpur, Rajajinagar and Malleshwaram, this constituency has grown at a fast pace. There is also an exodus of workers from Peenya Industrial suburbs to the quieter locales of Nandini Layout and Mahalakshmipuram.

The constituency consists of seven wards. JDS and Congress have three corporators each along with the lone BJP representative, S Harish from Nagapara, who is also contesting. There are 2.12 lakh voters in 2013. There has been no significant increase in the voter base since 2008. 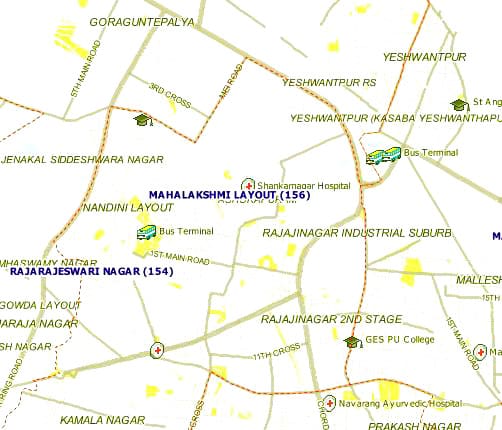 The water scarcity problem has been a major issue in all the seven wards of the constituency. There are certain zones, which don’t receive water for over 24 hours at times. The sitting MLA Narendra Babu has apparently put in efforts to resolve this issue, but not succeeded much yet. The other candidates have solving the water problem as their major poll promise. The residents also face garbage-related problems, with garbage mounds not been cleared in many places.

How the sitting MLA has dealt with the area

People feel, Narendra Babu, the incumbent MLA, has tried to address garbage problems. Narendra Babu blames the previous Kumaraswamy and Yediyurappa governments’ for inadequate planning. During his tenure, the areas mostly in the vicinity of Babu’s residence has seen significant improvements in the garbage situation, with mobile vehicles collecting garbage.

He has organised various meetings with BBMP commissioner Siddhaiah to address the same.

Citizen Matters spoke to Narendra Babu who claims the following as his achievements:

As an MLA, he’s been easily accessible to the public at large and has a reputation has a very patient and humble person. This time, Babu apparently does not have the support of his Congress corporators.

S Harish, BJP corporator for Nagapura Ward and Narendra Babu’s rival candidate now and S K Krishnamurthy, Congress corporator for Mahalakshmipuram ward spoke about the key issues in all the wards of the Mahalakshmipuram constituency. They spoke of development of the roads, establishment of streetlights and correcting the various water problems. Both complimentedthe Narendra Babu for his good performance.

Aneesh, IT Consultant, spoke admiringly of Babu’s Janaspandana programmes. Ranjita, B.Com IV year at Aurbindo College, expressed her plan to vote for Congress, as her family has voted for Congress since the times she can recall. The Congress candidate Narendra Babu is her favourite for his dedication towards improving and providing for the locality. Babu is said to have helped Ranjita’s father, a building contractor, cover his insurance. Narendra, 60, a driver, plans to vote for Congress. Sunil, owner Sanjeevani Medical, believes in selecting the right candidate by looking at his portfolio and not his party. He’s also particular about the voting rights for women.

Interestingly, Narendra Babu has seen a phenomenal increase in his wealth since 2008, from Rs 12.89 lakh in 2008 to Rs 1.53 crore till date, a thousand fold increase.

Narendra Babu is the three-time corporator and two-time MLA from the area.

S Harish, the ex-deputy Mayor is the BJP candidate. He has organised the Janamana Jatre, an event for the locals, which attracted around 3000 residents. His efforts of turning eco-friendly, claimed to have generated 1-1.5 lakh from the plastic dry waste. Being a volleyball player himself, he has organised the annual Vajpayee Volleyball tournament for the last 12 years. He is active in politics for last 20 years. Harish says former Prime Minister Vajpayee is his role model and inspiration. He’s determined to correct the water problems faced by the residents of Nandini Layout if elected as MLA.

Rajshree Mudaliar, an entrepreneur is contesting as the Loksatta candidate. Rajashree intends to rid the political system of corruption. She plans to bring in changes in the government schools with better-equipped system and staff in place. She also intends to create booth wise committees to address issues. Rajshree doesn’t have any prior political experience. Loksatta founder JP Narayan inspires her. She says her campaign budget amounts to five lakhs.

Veeresh Kumar, the JDS candidate says Devegowda and Revanna are his inspirations. He says his social work includes getting pension for the aged and handicapped. He claims to have limited campaigning resources for the elections and says his goal is good politics.

Behind the lens, discovering Bangalore

A lively gathering of amateur and semi-pro photographers at the exhibition and award function of Bengaluru Infinite 2010 photo contest.

These are the candidates you’ll see on the ballot when you are in front of the EVM to press the button.

Karnataka HC rules in favour of govt, municipal polls to be delayed

The State government gets at least six months’ time to consolidate its plans for Bengaluru, on dividing and restructuring, after the High Court rules in favour of the State, as the BBMP Council has been superseded already.