Located in the north-east part of Bangalore, the Sarvagnanagar Assembly Constituency has seen a lot of development in the recent past. With several educational institutions, hospitals and other commercial establishments, the area is thickly populated. But with the drastic rise in development and an influx of people, Sarvagnanagar is lagging behind in infrastructure. The foremost of problems faced by residents is that of drinking water. 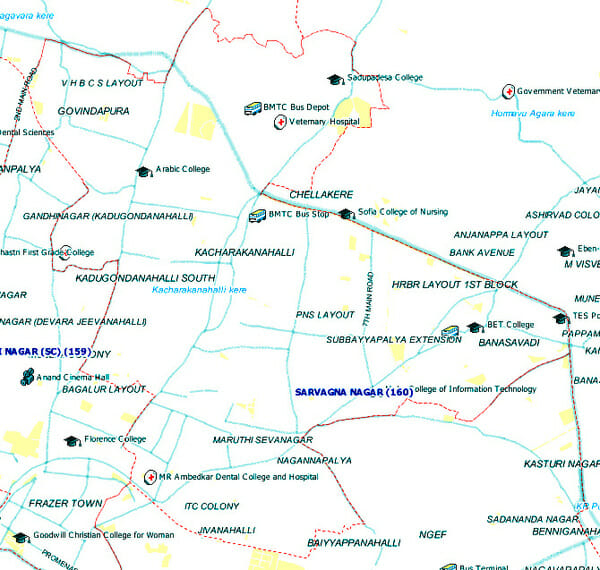 Most northern and eastern parts of the city are facing acute water shortage. The peak of summer is a further testing time. The current MLA of the constituency, K J George (Congress) says he has ensured the installation of several borewells under the Mini Water Supply Scheme. He says 170 borewells were put up with funds from the BBMP/BWSSB and the MLA grants. But with the rapid growth of the area and mushrooming of new buildings, water just does not seem to be adequate and continues to remain a challenge.

Commonly, Cauvery water is supplied twice a week to these areas. If that falls short, residents are forced to depend on private water suppliers. Another complaint with regard to water supply is the lack of pressure. Water does not come in full force due to the terrain in this constituency.

However, in certain areas the past two weeks have seen some respite. Like in Kacharkanahalli ward, the Cauvery water released has been more than normal, and with full pressure. Many residents feel that this is because of the elections and that things will return to ‘normal’ after May 5.

But it isn’t just water that’s a problem here. Garbage collection too is an issue. While the garbage trucks are irregular, heaps of garbage in street corners are a common sight. The local MLA says that out of the eight new contractors who were appointed, only four have commenced work in Maruti Seva Nagar, Lingarajapuram, Kacharkanahalli and HBR layout. In the remaining wards,

Kammanahalli, K G Halli, Banaswadi and Nagawara, the contractors are yet to begin work.

Several residents of Sarvagnanagar also complain about the sewage system. Low-lying areas like Nagawara and K G Halli see flooding during the rainy season. Rainwater mixed with sewage water enters homes. Clement F Martin, a resident of Kacharkanahalli, says that he and his neighbours spend Rs 1500 every three months to get the sewage pipes on their street cleaned. "The underground sewage pipe is about 12 to 13 years old. During the rains, water gets mixed with sewage and it floods our houses". Martin says despite several complaints a new pipe has not been laid.

Traffic is another cause for concern in this constituency. Sarvagnanagar connects the southern parts of the city to the international airport. It has also become a thickly populated area. So the number of vehicles moving through the area is increasing. The roads are not wide enough to withstand the traffic. Traffic jams are quite common the Banaswadi flyover and Lingarajapuram flyover. Tannery Road, Nagavara Main Road and Kammanahalli Main Road are narrow but see a

huge number of vehicles every day. The heavy traffic density also makes it unsafe for pedestrians to cross the road. In several places, proper footpaths are not there, forcing pedestrians to walk on the road.

With these major issues in Sarvagnanagar, it is going to be a challenge for candidates in the upcoming polls. Sitting MLA George claims to have addressed most of these problems but adds that a lot more work is to be done. A three-time MLA, he says he is addressing the water problem actively and that the garbage collection issue will require more time to be solved. He says a majority of his MLA funds has been used to provide basic amenities to government schools and constructing anganwadis. To read his complete interview, click here. To view his performance as MLA, click here.

Vittal Rao, a resident of Sena Vihar located on Kammanahalli Main Road, says George’s performance has been average. He says, "They promise, but very less is done on the ground." Martin feels that George is not an approachable MLA.

The JD(S) candidate of Sarvagnanagar, Syed Mohid Altaf, feels that his competitor spends most of his time abroad rather than in his constituency. A lawyer by profession, Altaf is a first-time candidate and joined the JD(S) barely six months ago. He feels that Sarvagnanagar hasn’t been developed properly in the last decades and hopes to be the change that is required. He talks about developing the slums in M S Nagar and K G Halli. Altaf claims to have been providing drinking water through tankers for the past six months to residents in Nagawara and K G Halli. He says the water problem can be solved by installing more pump houses in the constituency.

As for the garbage problem, Altaf says if he is voted to power, he will install wet and dry collection points in every layout.

However, the BJP candidate from this constituency feels that compared to both George and Altaf, he has an upper hand as he is a local resident. Padmanabha Reddy, who recently joined the BJP after quitting the JD(S) as he wasn’t given a ticket to contest in these polls, is a Corporator of the Kacharkanahalli ward. Martin feels that Reddy will be a suitable candidate for

the post of MLA as he addresses their concerns immediately. While residents of the ward are familiar with his work, it remains to be seen if he having changed parties will have an effect on votes.

There are 2,79,846 voters here this time. It remains to be seen whether the voters will remain indifferent this time too, or will decide to go out and cast their vote.⊕

LDA leases out Agara Lake to a private party which plans an amusement park. Local residents and environmentalists are aghast and plan their next moves.

Garbage and potholes top the list of problems in Bengaluru

The survey shows that most respondents don’t care for the candidate’s party or caste. What does the voter of Bengaluru think about the corporators? Read on.