The Supreme Court guidelines for school bus safety will come into effect from May 1, 2013. But it is no consolation for the family of the three-year-old who was knocked down by his school bus in June last year, or for the six-year-old girl from Chennai who fell to death through a hole in the floor of the bus.

School bus accidents are so common in India that they often don’t make more than a single column in newspapers. Yet parents are surprisingly silent about safety issues and reluctant to take on schools on this issue. Almost all parents I spoke to had some issue or the other with their children’s transport system but very few agreed to speak about it openly. "My daughter’s classmate was dropped in front of the society’s gate at a different time by the bus. The assistant in the bus didn’t even bother to check if the child was being received by somebody," says a parent whose child goes to a reputed international school in Whitefield. 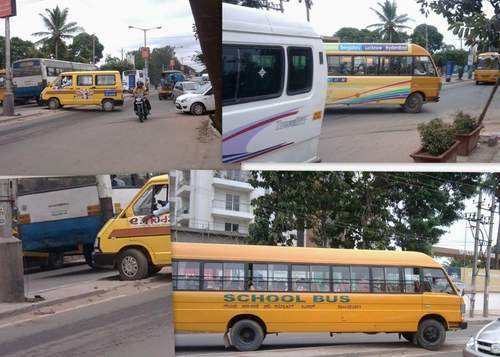 Buses going over the speed limit and the fear of frolicking children getting injured inside are a concern with many parents. One of them says she has repeatedly approached her daughter’s school to request seatbelts to be installed but the school has not taken her seriously enough. "I feel us parents are to blame. When I raised this point at the open house, many parents looked surprised and one even commented that in India parents hardly wear seatbelts so to expect children to wear them in a school bus is something else!"

Hema Rangarajan is a stay-at-home mom and founder of a Facebook group for Bangalore moms. She certainly prefers school buses to private cab services and except for a few issues is more or less satisfied with her son’s transport system. She did however suggest the school to set a speed limit and ask drivers to adhere to it. She says what’s important is that there is somebody in the bus to oversee the children. Rangarajan, like many other parents, voices a fear that can’t be changed by the SC ruling: Rash driving by other drivers that could result in accidents even if the school bus is following guidelines.

While safety is of utmost importance, Rangarajan feels it should be affordable. "Safety varies from school to school. There is the extreme of AC buses with seat belts, which also cost more. Not every person can afford that. We need a moderate level that is affordable to all,"

The World Health Organization (WHO) in its first ever Global Status Report on Road Safety pointed out that the mortality rate of children in India per 100,000 people is 19. Nearly 134,000 Indians were killed in traffic accidents in 2010.

When most parents are hunting schools, they usually find out things like the student teacher ratio in class, the curriculum, academic record, sports facilities offered and other such things. Safety aspects are looked into but usually within the school premises. Parents are mostly satisfied if the school has a bus service that reaches their doorsteps.

Technology entrepreneur Kunal Asher feels that parents almost never ask about child safety measures in the school. "Those who do, treat child safety as an adjunct, rather than a necessity." He feels parents should be on the lookout for a safety checklist. According to Ashar, buses should be RTO-approved, have adequate seating and experienced drivers with valid licenses. Female attendants certified and trained in child safety techniques, drivers and attendants verified by the local police and first-aid kits are a must have. On the technical front, working pneumatic doors that are closed every time the bus is in motion, windows with grills/bars that prevent children from sticking their heads and arms, working speed governors, GPS tracking systems and webcams are what make it truly safe, he adds.

Asher once tried setting up a Child Safety Association in Bangalore and was worried to find parents unconcerned.

"When I attempted to start the association early last year, which required the active participation of parents of children from various schools, the response was lukewarm at best. Of the 200+ parents I spoke to, most had no time to discuss child safety risks and measures, and less than 3% were willing to spend 1-2 days every three months to meet and assess child safety problems and discuss potential solutions. It’s pretty evident that parents underestimate safety risks to their children, and therefore overlook safety measures in schools and buses."

When parents have issues, what is the best way for them to communicate to the school?

Seema Talwar who now drives her children to school because of what she calls ‘unmonitored environment’ in their school bus says the best way is to gather support from other parents because they are also probably facing the same issue. She has done that and is hoping for an audience with her child’s school principal once the new session starts in June.

Ashar thinks the answer lies in parents getting involved in the PTA to discuss issues regarding security of the children on the school premises. "Parents could volunteer to be a bus-parent by rotation, to ensure that every child is dropped safe and sound to their destination and enforce a rule that only adults with authorized ‘bearer cards’ are allowed on the premises to pick up a child during dispersal time. They should also check the school buses, drivers and attendants for licenses and certificates issued by the RTO, police and school," says Ashar.

Many parents however, remain skeptical. "The May 1 guidelines are much needed but I hope the schools execute them in the true spirit and don‘t see this as an opportunity to increase fees in the name of safety of our children," says Vinita (name changed), mom to a 10-year-old.

We do hope the schools are listening in.⊕

There are many fora and NGOs working to promote cycling in the city. What is needed is to get the road infrastructure right for cycling.