He drove into Chaithanya Samarpan Layout at Kadugodi, around 5 kms north of Whitefield, in an entourage of three vehicles. All of the vehicles were the bulky SUV-types. The owners association had organised a meeting on Sunday (April 28) morning. 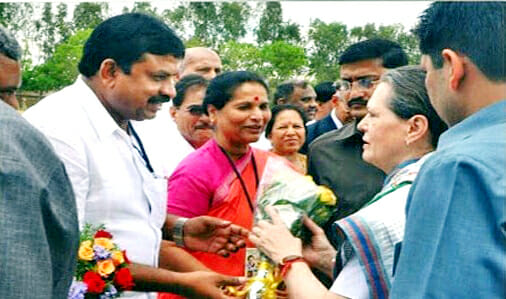 A C Srinivasa is the Congress’ candidate for the Mahadevpura constituency in north-eastern Bengaluru. He is the local man who rose from the grassroots to district panchayat president. His immovable properties are worth Rs.83 crores. He is clearly a rich landowner. He was Zilla panchayat president till 2011 and is currently Karnataka Pradesh Congress Committee secretary.

He was born in 1967 at Chokkanahalli, a small village in Bangalore North Taluk in Karnataka. Srinivasa’s schooling was done in his village. He attended V V Puram College in Bangalore for his graduation in commerce. During his college days, he made his entry into politics as a student union leader. (source: acsrinivasa.com)

A small group of residents at the Samarpan community were joined by a management committee member at the Sai Garden apartments and another resident from 10 Downing.

What do you think, are the problems faced by your constituency?

Water, roads and drains, parking, and traffic-related pollution are the major problems I see in this constituency.

I am known as a good administrator when president of Bangalore Zilla (District) Panchayat. I am not corrupt. I have not taken any money from contractors and engineers. I have helped in the building of hospitals and veterinary hospitals in this area.

Where do you see yourself in next five years?

I want to serve one term as MLA first. Give me a chance and I will show what a non-corrupt person can do here. It is not possible to fix previous illegalities. But I can stop future illegalities because I don’t take money from engineers or builders. There are plenty of plans still pending for permissions in this area. There are builders wanting to build large housing projects in 30-feet roads.

Give us some details about your family.

My wife is a homemaker. I have one daughter who is has passed Ist PUC and has gone into PUC-II this year. One son has passed 9th standard and entered 10th standard. My father was a government school headmaster.

Tell us about your profession and key sources of income.

Describe your party roles and activities/history.

I was the block treasurer for Congress at Byatarayanpura. I am also a KPCC member. I am now KPCC state secretary. I am also KPCC in charge for Tumkur.

What is your budget for the campaign?

I am spending my own money for my campaign. I am not holding any large functions. I am going door-to-door and meeting other apartments. I am meeting four apartments in Bellandur today after this meeting. Congress party gives some funds.

Give us three reasons why people should vote for you.

I can therefore direct officials to not allow illegal constructions. If I do not take money from them, they cannot influence me are usually afraid of me. This has happened when I was ZP president. When I used to go around, engineers were usually worried.

What if there is pressure from a minister?

I try to convince senior people.

Will you disclose all expenses for local projects in your constituency using your MLA funds on a website?

There is a problem. The BWSSB’s NOC approach to allow builders to develop in areas where there is no water is wrong. There is not enough water to handle growth of Bangalore. This is an important point for the government to note. I support stopping of permissions for new development in areas where there is no water. The same problem applies to roads. There is already enough traffic and congestion. There are not enough resources in Bangalore for the existing population.

What is happening to the peripheral ring road that is supposed to pass through this (Whitefield Hoskote Road, near Kannamangala) area?

I support the PRR. I have 3.5 acres of my land that will go to the PRR. But the BJP government wanted to compensate land-owners at 2005 rates. Land owners including people like me are asking for present rates.

But PRR is needed. It will ensure that the commercial truck traffic going to other cities will not come into Bangalore city. That will take out some of the traffic and pollution.

The Congress government if it comes to power, will not offer 2005 rates. We will give landowners current rates.

Yes. I had given land to a society and there was a dispute between the members of the society. In the case that one member filed against another, they included me and charged me this way. This happened in 2003. But in 2009 the case against me was quashed, so there is no conviction.

Chaithanya Samarpan owners and other gated communities in this area are currently caught in a problem with both the Sheegehalli Panchayat and the BDA asking for property and willing to issue Khatas. What is your advice?

Panchayat has to collect the property tax, not BDA.

The process is as follows. The BDA has to issue first khata for each property. Owners have to take that Khata and register with panchayat. Panchayat creates an entry in their register with BDA Khata and issues a fresh khata confirming the transfer. After that property tax is paid to panchayat.

In return for these taxes, panchayat is supposed to maintain roads, drains, street lighting, and water supply. Panchayat areas that don’t get water from the BWSSB usually get water supply from borewells.

Panchayat should remove encroachments, yes. There is no other option.⊕

Watching media makes up large part of her work. She thinks that the younger generation of journalists are very active, but media fails to connect the dots on larger issues.

After the successful sojourn as screenplay writer in Manasaare and Pancharangi, Bengaluru huduga, Pawan Kumar is all set to debut as a director in Lifeu ishtene. He talks about his struggles with theatre and cinema first as an actor and then as a writer and director.

For me, winning is a means to solve issues better: Meenakshi Bharath

Dr. Meenakshi Bharat, a doctor-turned-reformist contesting as a Loksatta party candidate, reveals her plans for Malleshwaram in an interview to Citizen Matters.