Its 8:30 am and Doctor MRV Prasad is on his rounds – but this time it’s a different kind of rounds. Dr Prasad is contesting the MLA elections from the Padmanabhanagar constituency on a JD (S) ticket. He is constantly going door-to-door asking people to vote for him. The campaign is a low-key affair, with only a handful of supporters walking with Prasad.

Dr Prasad has been a physician in Thyagarajanagar for the last 40 years. A man on scooter, on spotting Dr Prasad, stops and tells him that he went by his nursing home but there was no one there. Dr Prasad apologetically tells him “I’ve closed the nursing home for few days. It’s just that there are just a few days left before voting and we have to cover as many areas as possible” he says.

Here are the excerpts from the interview: 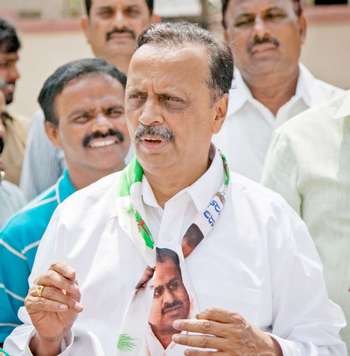 What are the problems of the constituency?

Apart from the shortage of drinking water and lack of garbage clearance one of the important thing lacking in this constituency is a general hospital. The poor in this area have no other option but go to private nursing homes as there is no government hospital. Though there are many parks in the constituency, none of them even have basic facilities. There is no public auditorium in the area where people can have cultural programs.

My leadership qualities. As a doctor I have dealt with people from all backgrounds and religions with love and affection. A large number of people who are in pain come to me seeking help. After 40 years of service as a doctor I’m well-versed with solving problems of my patients, similarly I am sure I can solve the problems facing the constituency.

Me entering politics was completely accidental. Till three months ago I had no clue that I would be contesting elections. One day former prime minister H D Devegowda called me and told me he was coming over. He told me that since I had done so much service to the people that I should enter politics to serve more people. He asked me to contest the Padmanabhanagar constituency on a JD(S) ticket. I consulted my family and friends and felt that educated and qualified people like me should enter politics instead of just talking.

Is there any motivation/ model figure to follow for you in politics?

As a young man, I used to admire politicians like T R Shamanna and Harnahalli Ramaswamy. They were politicians with principles and they are my role models.

What are the changes that you would bring about if you were elected?

Firstly all works carried out in the constituency will be done in a corruption-free and transparent manner. I would also help set up a well-equipped general hospital to cater to the needs of the common people. I would ensure better infrastructure, better water and electricity supply and efficient garbage collection. And since this constituency has a lot of senior citizens, I would ensure that we provide them better facilities at parks and also provide them places for recreation.

How do you intend to fund your elections?

I’m not spending too much on the elections because I don’t think votes need to be bought. If people think I have the qualification to be their representative they will vote for me. Most of the people who come with me to campaign do so on their own. The party has provided me some basic support but rest of it I’m spending my own money, which is about Rs 4- 5 lakhs only.

Do you approve of G-category sites?

I think sites should be given only to people who achieved something exceptional and not for everyone. Maybe someone who has won the Jnanpith award or who has performed very well at the international level should be given.

Music is my primary hobby. I am student of Carnatic Classical music for the last 12 years and have trained under TP Prabhakar and RK Padmanabha. I have performed in over 100 concerts and I specialise in rendering Dasa Vani. I’m also presently the president of Bangalore Gayan Samaj which is one of the oldest music organisations in the country.

Can you tell us a bit about your family?

My wife Shashi Prasad is a social worker and works with many volunteer organisation. I have two children, son Pramod is software engineer working in Los Angeles and my daughter is a Chartered Accountant working with Wipro.

What are the three reasons why should the people of your constituency vote for you?

Clean up, everybody, everywhere…

Many of us are used to our beds being made, toilets cleaned, homes being swept and mopped and trash taken out. And that may be why our city is so messed up.

Going on a heritage walk can throw up some delightful insights into Bengaluru’s history.

‘I never work for awards’

He has been living in Jayanagar for 45 years and knows the pain points of the locality very well. He passionately works for the betterment of the area where he has spent all his life.