Kadlekai Parishe (Groundnut festival), one of the city’s oldest cultural events, takes place on the last Monday of the karthikaa month on the Bull Temple road in Basavangudi. This year it was held on the 3rd and 4th of December. 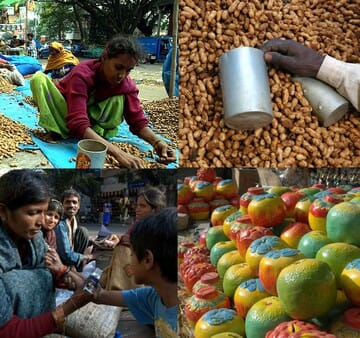 From Top Left, clockwise: Woman removing the bad groundnuts from the good ones, Groundnuts sold in two measure of one litre and half litre, Piggybanks on sale, A family from Dharmapuri comes every year to practice the art of tattooing – a boy gets his mother’s name inscribed (pics: Rushalini Rajkumar)

In the 16th century, it started off as a festival wherein the farmers from the surrounding areas offered their produce of groundnuts to the holy bull at the beginning of the season. Legend as it that a farmer mistook the Nandi (Bull) for a thief and hurled a crowbar at it. The dead bull metamorphosed into stone. The farmer decided to build a temple over the bull to redeem himself, but was amazed to find the stone bull growing in size. Lord Shiva is believed to have directed him to a trident which was fixed on the bull’s forehead to stop it from growing. But some accounts also claim that Kempegowda, the founder of Bangalore built the temple in 1537.

It has evolved from a simple fair with farmers selling groundnuts into a full fledged carnival, with vendors looking to make quick profits selling anything from pottery to wigs. Groundnuts, boiled, roasted or salted, dominate the scene but there are a host of other attractions that vie for attention. Merry-go-rounds, giant wheels, bubble-blowers, and pinwheels bring excitement for children and the young-at-heart; robot fortune-tellers, tattoo artists bring in the exotic. Apart from the groundnuts, vendors also sell puffed rice, mixtures, jaggery, sugar cane juice, ice cream, pop corn, among other things.

The festival had participants from Karnataka, Andhra Pradesh and Tamil Nadu. Perumal who is a construction labourer in the city had bought 10 sacks of groundnuts from the mandi (market) at Srirampuram in Bangalore and sold it, at Rs. 15 per litre at the two day festival. He said he bought each sack for Rs. 1600 and made a profit of Rs. 300 on each sack. Selvaraj from Dharmapuri sold his own produce and made a profit of Rs. 1000 on each sack. Adi who owns a store in Hosur said he sold goods worth Rs. 20,000 at the festival. He sold around 200 sacks of puffed rice apart from mixtures, fried tapioca, jaggery, sugar balls, etc.

On the second day of the fest, there was an estimated crowd of four lakhs according to the Assistant Sub-Inspector of Police, B. Rajegowda. In order to ensure security, he said there were 200 policemen deployed and an additional 100 traffic police. Only one entrance to the temple was opened and a metal detector was installed. For further surveillance, there was one camera placed inside the temple and one outside the temple. In the evening, the traffic on this road was blocked. 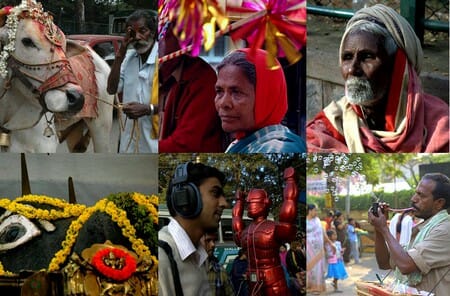 The head temple priest, Sunil Kumar S said 500 litres of milk were used for the abhishekam of the Basava on the opening day of the parishe and an additional Rs.15000 was spent on flowers, the money coming from the temple funds.

However, in the midst of the festivity, the corporation workers were found complaining. They said they weren’t being paid extra to clean the roads on these two days either by the temple authorities or the corporation. They added that the vendors didn’t even give them a few free groundnuts.

About Rushalini Rajkumar 3 Articles
The author has not yet added any personal or biographical info to her or his author profile.

An ode to Karnataka through photographs to start on Rajyotsava eve

Six photographers will be showcasing their rendezvous with Karnataka through their photography at Prathibimba.

Walk around the city, learn about Bengaluru

An experienced heritage ‘walker’ gives some tips on what makes these walks a success.