Malleshwaram is a peaceful old locality in the city, the central part of which is filled with age-old buildings like IISc, CV Raman’s house, MLA School and many old houses. Central Malleshwaram has BJP and KJP state offices. Among popular personalities in the constituency are Sudharani (film actress), Ananth Nag (film actor) and Vimala Rangachar (president of Karnataka Chitrakala Parishat).

This strong-hold of Janata Dal had catapulted the BJP to MLA’s chair, following the wave of sympathy for the Yeddyurappa-led BJP soon after Kumaraswamy burned bridges with the BJP and state went to polls again.

Incumbent MLA and his performance

After five years, much has changed here. The incumbent MLA has failed to satisfy the demands of the residents of Malleshwaram, even as he went on with his own plans of ‘developing’ the area. Being the senior vice-president of the Karnataka State Athletics Association, Ashwath Narayan seems to be less-interested in parks and playgrounds and more on sports-related ‘developmental’ works. Basketball stadiums, BBMP-funded, private-run gyms, construction of roofed seating arrangement for Malleshwaram ground are the works done by him.

Ashwath Narayan batted for the widening of Sankey tank road and proposed the construction of luxury apartments on the land belonging to the government-owned debt-ridden Mysore Lamps, in April 2012. These two acts, along with his extreme interest in building stadiums and gyms throughout the constituency are seen by the citizens as an act of killing the lung-space in this area.

Even as the elections were nearing, many of the roads in the central Malleshwaram got a facelift with reflectors for median and humps and superb LED street lights. The Subrahmanya Nagar park that had withered plants, trees and broken play equipments has undergone a quick makeover in the last few months, with landscaping and artificial canal designed and broken equipment replaced by new ones. However, there is no water to fill the artificially shaped canals inside the park.

The constituency was under scanner for multi-crore fake bill scam unearthed by the Technical Vigilance Cell of the BBMP. An attempt to build a basketball and tennis court in the Vyalikaval park via BBMP was stopped by the High Court, in response to a PIL filed by some of the residents, in accordance with the Parks and Playgrounds Act. Prior to filing the PIL, when residents had voiced their concerns, Ashwath Narayan did not support them.

Assets and liabilities of MLA

Assembly Constituency has seven wards. Out of these, six have BJP corporators, while one ward has a Congress corporator. Out of the six, Vijayakumari, corporator for Rajmahal Guttalli, is said to be ‘hospitalised’ and inactive in this election, even as her husband has broken up with the BJP and contesting on a KJP ticket.

A new mall is coming up opposite Orion Mall. The traffic in the area is already chaotic. The new mall will add to the bottleneck
– Suchitra Santosh, Subrahmanya Nagar resident

The Orion Mall and Brigade group buildings are constructed on a Rajakaluve. There is a PIL pending against this. – Kiran R V, Malleshwaram resident

The Mantri mall and the Mantri Greens residential complex, that are practically in Malleshwaram but fall under Gandhinagar constituency, have been the cause of enormous traffic jams and parking problem in the area. The new Orion mall and the Brigade group World Trade Center have added to the worry. The traffic jam at Yeshwanthpur circle is unmanageable. Yeshwanthpur APMC falls under this constituency.

Garbage segregation and disposal is not being done properly in many of the wards. In some wards like Kadu Malleshwara, new garbage disposal contracts are yet to come into effect due to code of conduct. Traffic and parking problem multiplied by frequent road repairs are always the pain in the neck for the constituency.

Gayathri Nagar and Subrahmanya Nagar areas have frequent problems with drinking water supply. Though these two wards are separated from main Malleshwaram just by the Majestic – Yeshwanthpur railway line, in reality they are a world apart, with the obvious disparity in water supply, power cuts, garbage and congested roads. Kadu Malleshwara and Malleshwaram wards where the affluent live rarely suffer from these problems.

Proposal to demolish and rebuild the Malleshwaram vegetable market into a multi-storeyed building has landed the lives of over 269 vegetable vendors in jeopardy. About 51 of them have managed to get a stay order by the High Court, and the rest are in the process of obtaining  a stay. This project of the BDA, according to reports, does not have clearances by the Fire, BWSSB, BESCom, BSNL and Pollution Control Board, and has various irregularities.

The BJP corporators of these areas claim to have solved all the problems for obvious reasons. However, the problems still exist out in the open for all to see. 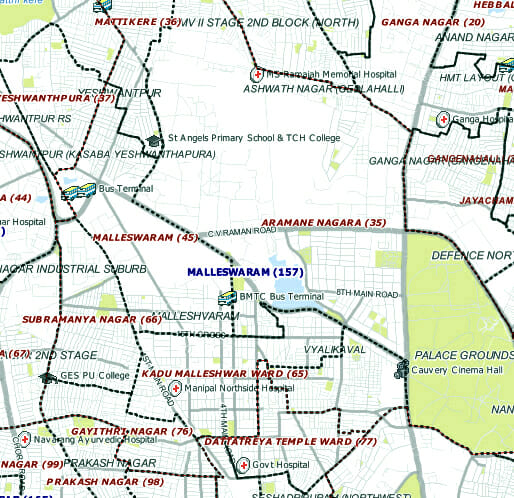 Here is a summary of the data in the constituency on education front, for the past four years. The data shows that number of schools have gone up from 85 to 112, and pupil-teacher ratio is better in government schools than in private schools.

On April 21, some BJP workers were caught on camera by Public TV reporters while distributing 2,000 rupee for men and golden nose studs for women. There are also allegations that BPL cards were distributed to poor people on Saturday, April 20, while code of conduct was in effect.

Whether one agrees with it or not, caste is a social reality. Various parties keep caste in mind while choosing winnable candidates. Malleshwaram has the following caste pattern approximately.

Though this is a scenario where BJP would win, this time anti-incumbancy and the division of BJP are going to play major role.

If you are one among the lakhs of voters of Anekal, this is what you need to know! Background information Understand the role of the MLA Learn all you can about the candidates: see below

The road connects Gollahalli to Electronic city. But it encroaches on a lake. Will the order be reversed?