They look at us as apathetic at best and cynical at worst. So they don’t feel the need to engage with us because we won’t be a part of any political base that they can build on.

What we think of politicians and political parties

Ineffective at best and corrupt at worst. It doesn’t matter who comes to power because nothing will change for the good so what’s the point of voting and helping someone amass wealth and commit atrocities.

How does this status quo work for us

This status quo doesn’t work for us at all and things will get worse, because those in power will continue with impunity because they have invested in a system that works for them and they will do everything to make the system work for them especially since we make it so easy with the educated middle class not pushing for any reform of the system in real terms. And we’ll continue to lament even more but not see any real change on the ground. 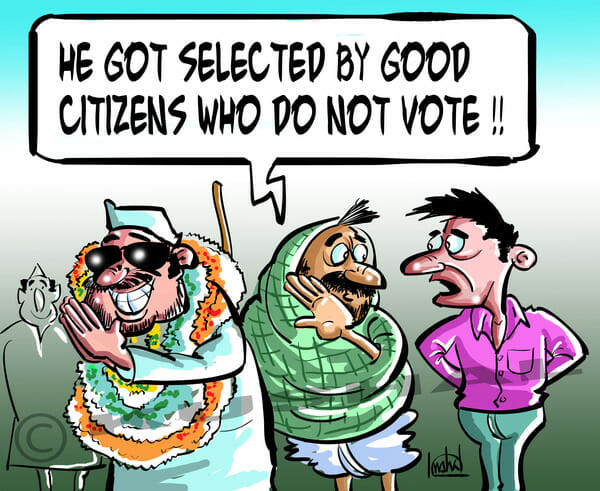 How can the system change for the better

We can hope for miracles and maybe we’ll get someone who will change the system from inside out and do the dirty work of reforming the system for us. But that’s not likely to happen, is it? A better way to change the system for the better is to shake this status-quo boat a bit. This comfortable nexus between politicians/political parties/crime/corruption/inefficiency/dismal governance can get a shock treatment from us. Let’s try getting involved and see what that stirs up.

Perhaps nothing will change (but I doubt that) but there is a chance that it will. Taking that chance is better than not doing anything and allowing things to get worse. Some of us have, honestly, never tried…we are espousing beliefs that were handed down from our parents or an older generation. But perhaps if they had engaged more, asked for a more responsive government and held them accountable in real terms, things would not be this bad. Afterall, things don’t rot in an instant… it’s a slow process.

There are two ways: the easy way and the hard way. The hard way is to really get into their hairs by questioning them, working with them, inserting ourselves in the process of governance. Most of us don’t have the time or inclination for that kind of involvement. The easy way is to vote.

They cater only to their base and let’s face it, we are not their base. We don’t participate. And if we do participate, knowing that we are an educated/economically powerful demographic, they know that they can’t just let our demands fall by the wayside. Again their taking cognizance of us is not something that will happen within one election cycle…it will be something they will have to notice as a pattern.

In the meantime, some of you will say they will make their money, they will do bad things… well, I say, they are doing that anyway. By not engaging we are not preventing that from happening. But by engaging we have a decent chance of making a dent in that horrible cycle.

Surely my one vote cannot make a difference!

We all understand the power of numbers and that’s what it’s all about. Honestly one or two of us voting on the basis of some principle of universal suffrage doesn’t really mean much in practical term. If the voting numbers jump in our area , believe me, they will sit up and take notice and try to figure out who the new voters are.

We needn’t vote as a block ( i.e. we needn’t collectively support one candidate or one party) although that is a smart move if there is a candidate that we can all agree upon. Maybe sometime in the future when we become a strong voting constituency, we can do something along those lines. But for now…showing up at the polling stations and voting in numbers is key. Along with voting we must also actively engage with the government to do their jobs. Just voting alone is not enough…but it is a necessary first step.

Some of us in our community are already working with various government agencies and interacting with various politicians in our area for larger causes. But being able to say that there are lots of people who will vote will strengthen our hand and make politicians realize that they need to listen to us.

Whom to Vote For? There is no one worth voting for.

Some people who have their allegiance to one party or the other will tell you that if we don’t vote for that party, we are doomed. Or that their party is the one that is better. All political parties have their agendas and if their agendas align closely with yours, then great… your choice is easier.

Some candidates have done good work and if their past record is something you like, then great… your choice is easier. But if the parties or the candidates don’t align with your views and you don’t like any of them or even actively dislike all that they stand for…choose the lesser of the evils.

Or choose an independent candidate who has no chance of winning because what you are doing now is making a statement that you are part of the process and that you will continue to throw your vote away instead of voting for them. If parties see that lots of people voting against them (i.e. throwing their vote away) and jeopardising their chance of winning, they will try to find a good reason for you to vote for them the next time around. They will field better candidates or make improvements that they hope will make you want to vote for them. Take a look at the parties/candidates, make a reasonable choice that meets some basic minimum standard (if you hold them to the highest standards you won’t have much of a choice. Hopefully that’s something we can aspire to in the future) and vote.

This is the beginning in a long process… a necessary process unless we say we are moving out of the country and don’t care what happens here. When we progress as a group (and I’m only talking about our constituency here…because once we start looking at the whole political landscape and the whole country things really look dismal and we will never be able to muster much enthusiasm) the more people whom we can get to register and vote…the more our chances of having our demands heard.

There is no other better way unless we are all willing to get down into the trenches and become candidates and cause a revolution. And somehow, I doubt that most of us want to do that. Getting ourselves to the booths to vote is revolution enough for us!

About Shubha Narayanan 5 Articles
A resident of Bellandur in Bengaluru and a film maker.