After many attempts to reach him, Citizen Matters finally caught up with Deputy Chief Minister and Padmanabhnagar MLA R Ashoka on a Padyatra in Shastri Nagar in Yediyur ward. Surrounded by a horde of screaming supporters and amidst shaking hands, waving at his supporters Ashoka answered the questions put to him. 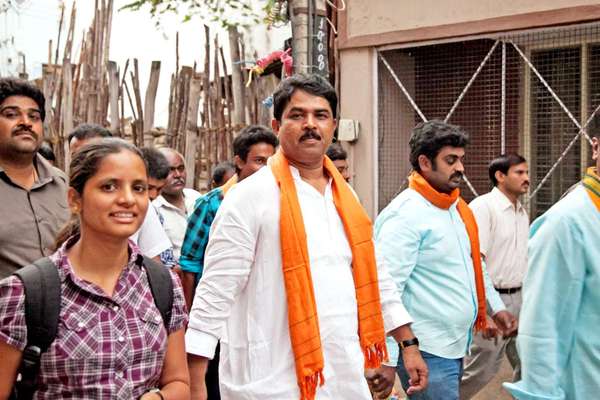 Here are the excerpts:

What are the problems facing your constituency?

The constituency before I became MLA had severe drainage issues. There were no playgrounds here and even those that were there were not in a good state. The constituency also has some revenue pockets in which the roads were in a poor state.

How much funds were you able to get for works in your constituency?

I have managed to get works worth Rs 500 crores completed through the BBMP as well the BDA.

Has the LAD allocated to the constituency fully utilized? According to the response to an RTI, it was found that only part of the fund was utilised for the year 2012-13.

I have utilised all the funds allocated to the constituency. Sometimes I have gone beyond what was given to complete works here. There were some problems with the release of funds earlier this year but now that has been sorted and as of now all the money allocated has been utilised. Money was not released until the full work was completed. I ensured that the money would be utilised based on the how much is completed. So if 30 percent of a 1 crore project is completed I’ve gotten 30 lakhs released for it.

Is BJP doing anything to ensure that something like Operation Lotus does not happen again?

At that time, there was shortage of MLAs. Some MLAs joined together by common intent, for public interest and development of their areas. Now some people from BJP have gone to Congress. Can it be called Operation Congress? It is the individual’s responsibility.

But is it fair to make MLAs resign and re-contest elections using public money?

Otherwise they will win from one party and vote for another party. Another election would have cost more, to elect all 224 MLAs in the state. So it was a necessity at that time.

What have been you achievements as an MLA in the last term?

Your work as the Transport Minister?

The city bus system is the best in the country and the corporation has even won international awards. We have about 7500 buses on the road and bus system even in Gujarat is 10 years behind us.

Your work as the Home minister?

During my term as home minister I effectively handled the situation facing people of the North East in the city. And after the Delhi rape we are one of the few states to invoke the goonda act to prosecute the rapists. Also during my term, there was not a single communal riot in the state. We have heightened coastal security and have set up eight new police stations along the coast.

But the attack on women in Mangalore also happened during your term?

We have responded to the incident very firmly and all the main accused has been booked under the Goonda act.

Don’t you think that all the controversies, scams and the infighting hamper your chances of coming back to power?

All the people who were involved in that have now left the party. Right now the BJP is united and there is no infighting. Now all the infighting has moved to the Congress.

Why should people re-elect you?

I have three things envisioned for Bangalore if the people re-elect us. First is a Green Bangalore, second is the completion of the Metro project and third is providing an alternative to Cauvery for drinking water for the city. And I love Bangalore. Jeena Yahan Marna Yahan, Iske Siva Jaana Kahan?⊕

How much property tax do you pay? What are you getting in return?

Is the tax that you pay the BBMP coming back to you in the form of good infrastructure? If not, what is happening to the money? What does the data say? Take a look at this article.

KSPCB to discuss climate change with public in mid-March

The KSPCB will hold public consultations across the state to collect suggestions and feedback on climate change. Possible dates for Bengaluru are March 17th, 26th, 27th and 28th.

Large-scale music festivals usually come at a cost to the environment. Echoes of the Earth, an annual music festival in Bengaluru, aims to change this by adopting sustainable practices