It’s 7.30pm on a Sunday, when Dr Meenakshi Bharat reaches home – obviously she is busy campaigning. Among others, her campaign team includes this 80-year-old man who has travelled on a cycle, all the way from J P Nagar to Malleshwaram, just for the sake of campaigning for Meenakshi. That explains the kind of circle she is in and her popularity.

Dr Meenakshi Ramoo Bharat is a Gynaecologist who has been actively pushing for citizen participation and environment-friendly reforms in and around Malleshwaram. Citizen Matters caught up with Meenakshi, in order to feel her pulse on her motive and agenda in this election. 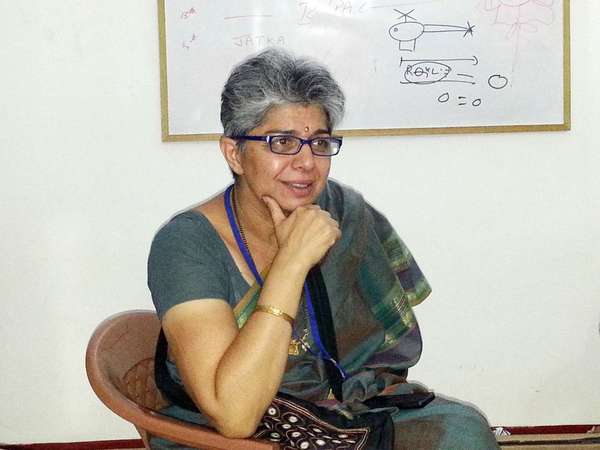 Why did you enter politics? What’s your motivation?

I began working on voter lists way back in 2004-05 with Janagraha and realised that there is lack of political will to keep the voters’ list correct. They deliberately want to keep the voters’ list wrong. Then I joined resident welfare association and started working. I became the secretary and found that the authorities do not respond to the citizens in the way they should. Then I along with Vani Murthy corrected the voter list for a booth, for 2008 MLA elections. Because of this we found that the voter turnout in that booth increased to 68%, as against 44% average turn out of Malleshwaram. That’s when we realised that citizen intervention can make a difference. Then we got involved in helping citizens in so many small ways like helping them get voter id cards. Then we worked with BESCOM, BWSSB and others. By then Dr Ashwath Narayan had won the elections. We were part of the team that helped him win. We all had voted for the change. Within six months we realised that it was not to be.

By then Mantri mall had opened. We started working with the system to solve the traffic problem. That also did not work. In 2011 they wanted to cut down the trees in front of Mantri mall, so we protested against it. Children from Stella Maris protested because their school was going to be affected. He (the MLA) became angry that children came to protest. At this point we started breaking away and look at the things that were not happening because of lack of political will. Then the garbage crisis came up. Again it was lack of political will. I realised that even though I love being a doctor, my impact on civic society is much more on society if I get into politics. I made up my mind in 2010 and contested for council elections from Aramane Nagar. I did not win, but the level of education for a corporator went up significantly because the candidate pitted against me who won was also a postgraduate.

When I did not win, I did not stop working. For me, winning was a means to achieve these things better. I’m no less, I’m as capable, as educated as anyone else. I’m concerned about the environment and people. So I decided to get into politics. At this point I met Jayaprakash Narayan. I was not willing to join any traditional parties. I was impressed with his ideology and joined Loksatta.

Do you have any personality that you treat as model?

Jayaprakash Narayan has made a big influence. Justice Santhosh Hegde too has made an impact on me. For the last 3-4 years listening to his lectures and working with him on ‘Saku Corruption’ has inspired me to work better to stop corruption.

We need to put in our professionalism into politics. I think we need more people with good competence to enter politics and change the way politics is.

Problems are the same everywhere – there is road, there is traffic, there is lack of water, no garbage, the public transport is not good enough, the safety of women is not good – all these things are inherent to every locality. What I want to do is set the system right so we will have safety, better opportunities, empowering women, public transport and environment. There is enough talent. You need to put it to use.

What has happened is the poor are disillusioned. Everybody goes, takes photographs, goes and gets the grants, but the grant never comes to the ground.

What is your budget for the campaign? What’s the source of funding?

Election commission has fixed 16 lakhs. We will do within 16 lakhs. Everything has been contributed by my friends. From 500 rupees to 5 lakhs, friends have funded everything. A good portion of the money we have put from our pockets itself.

Do you support the misuse of power in allocation of G-category sites by certain people in power?

It should not be done. Just because you are in power you don’t get allocated all these things, that too when you don’t deserve it.

I think solution to water is not Cauvery or bore wells, but other means. 750mm rain falling over 850 sq.kms is lot of water. Currently all the water is going to Rajakaluves. We have to work on decentralisation of water management where all the water soaks in. Currently there is no soaking in at all. All the drains are cemented. In 2009 we went to the commissioner and said, please make soak pits every 10 feet in the drain, don’t cover it up fully. It is such a simple thing. I have every possible thing in my house. A rainwater harvesting tank of 6000 litres, the overflow goes into a well of 22 feet. There is open land, so excess water soaks in.

Regarding residential and commercial development, we need better zoning. We can’t have all the residential areas commercialised. We can’t stop people if we are individuals. If we are a community we can achieve it. No building comes up in America or England without the permission of residents.

We already have plans. One of our residents had done a thesis on Malleshwaram. He has put up a nice plan for Market. All that is wrong with the market is it has no road accessibility. Once we give accessibility from the back, people will start populating the market. We don’t want malls. Why do we need malls in government properties? I want a completely eco-friendly Malleshwaram. I want to bring back at least the part of the old Malleshwaram that we have lost. All is possible. It just requires political will to do it.

That is nothing. It is so stupid. There was a photograph in which some people in muslim dress showering flowers on some with RSS dress. I said this is a great way of Bhai – Bhai. What are we fighting for? Everybody is an Indian. We can’t choose the religion which I’m born into. There are many who comment. But will anyone of those who comment come and walk with us on the streets? No. In any case, that’s my opinion. Am I not entitled to it? If I were not standing for elections, nobody would have bothered about that comment.

When I went campaigning, there was one woman who yelled at me. I said, you are yelling at me, not your current MLA. If I’m elected and don’t solve your problems, then you yell at me, I will accept it. It’s like tasting Doodh Pheda and Dharwad Pheda. If you don’t taste Dharwad Pheda, you will not know its taste. First you give me a chance. How would you know I will not perform better than current MLA? I don’t say I’m the best and the brightest. But I’m not less than anyone who is contesting. I think I deserve the same chance as anybody else, if not more.

Here is
a candidate who is definitely a change from the mainstream / traditional parties. She has worked for many social campaigns like ‘Saaku Corruption‘ and Anna Hazare’s movement. She was also a part of the team that tried to find out solutions for waste management in Malleshwaram vegetable market.

While other candidates are busy campaigning through mass rallies and backdoor methods like distributing money, Meenakshi knocks every door, puts forth her promises and asks for votes. She has the active support of her husband, B R Bharat, her daughter Kannika and her son Siddharth in every step.

Having started the campaign in December itself, she has covered almost all the wards – enough to make her a familiar face. The only question is, does she have enough grassroots connectivity to pull in the mass votes.⊕

Meet a budding violinist and a quiz champion, both from JP Nagar.

Air pollution has already hit Bengaluru, but no one is complaining because of lack of awareness. What will happen in next five years, if no measures are taken to curb air pollution?