The Greek word Oligarchy means ‘Government of a few rich people for their own advantage’. It was coined by the philosopher Aristotle 2300 years ago (he also coined the word Democracy). An Oligarch is a very rich businessman or businesswoman with a great deal of political influence. For convenience, we’ll shorten the word to Olly.

Karnataka politics has traditionally been funded by various lobbies of Ollys like the liquor lobby, the mining lobby, real estate lobby, and the contractors’ lobby (in urban bodies elections). When a politician needs money to fight an election, an Olly funds him, and the Olly in turn expects various business benefits when the politician wins the election. The Ollys in these lobbies have had power over the legislature and administration. They have been able to make laws to suit their convenience and violate laws with impunity by their money power. This of course is an old story.

Over the past decade, we have seen a new story being born, with a new generation Olly peculiar to Bangalore – the Bolly, or Bangalore Olly.

The Bolly wants Bangalore transformed into a ‘world-class city’ so that his clients get impressed when they visit his office in Bangalore, in the hope that this feeling eventually transforms into a purchase order and money. There is also the frequent threat from the Ollies that they will stop investing in Bangalore and move to Hyderabad, Pune or Gurgaon if the transformation to world-class does not happen pronto. Nobody knows what ‘world-class’ really means, although the term is used often in speeches and reported in the press. The Bolly sees the large resource hungry cities in the US and China on his travels abroad, and presumably has these cities in mind when he uses the term.

If this is so, the Bangalore that the Bolly sees in his dream is this: 10-lane freeways that have cars travelling at 100 kmph, without any slow moving traffic like bicycles, autos or buses. No pedestrian crossings, no footpaths. The airport and the Bollys’ offices and factories are the centres of activity, and these are linked by the freeways. The Bollys live in exclusive gated communities close to their workplaces. The rest of Bangalore is just incidental, existing just to support all this. 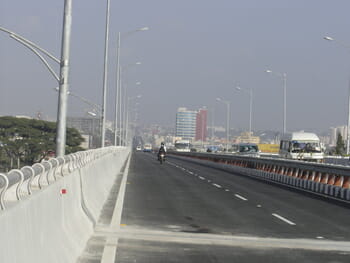 If you think this is an exaggeration, think again – The BBMP planned to widen 140 roads across the city, most of them to form signal-free corridors from various parts of the city to the airport. This would have involved the destruction of lakhs of homes and businesses, and cutting down of lakhs of trees. The plan has been temporarily suspended because of public protests, but will doubtless raise its ugly head soon.

The Bolly then said (obviously not having learnt from the earlier mistake on Hosur Road) "But this has not solved the problem. I want an elevated freeway" and the government is making it. The Bolly says "It already looks like the elevated road is a mistake – I might want a High Speed Rail System from Cubbon Road" and the government is thinking about it. The Bolly said "I want high speed roads from various parts of the city to the airport", and long stretches of Bangalore’s most beautiful tree-covered roads were widened.

So you have this ludicrous anomaly: according to statistics from the Department of Urban Land Transport (DULT), 33,000 people travel through the airport every day, while 10 Lakh people travel through the Majestic area, using buses or trains to enter or leave the city. The investment on the airport is Rs. 2000 crore – the six-lane highway, the elevated road, the widening of roads in the city for fast travel to the airport. Over the past five years, the investment on Majestic was Rs 20 Crore (Src: BBMP Budget)

River of sewage on BVK Iyengar Road – one of the busiest market places of Bangalore. Pic. source : Dasarathi GV

Bangalore is being redesigned and rebuilt to suit the Bolly’s ‘world-class’ city dream. So on the one hand there are power and water shortages, overflowing garbage, the state of the government’s educational institutions and hospitals is abysmal, and there is zero town planning. On the other hand, the government is spending enormous amounts of money on widening roads and building flyovers. In successive BBMP budgets the money allocation for road widening, flyovers and elevated highways is many times the allocation for health and education.

White elephant solutions like the Metro get precedence over quicker and lower cost solutions like an improved bus system, a commuter rail system, and cycling and walking. Why? Because the Bolly and his clients only see the airport and roads to the Bolly’s offices, factories and gated communities. It is enough if these are beautiful.

Which brings us to the point of how long term these Bollys’ businesses are. The employees who work for the Bollys are the average Bangaloreans who suffer the consequences of the Bollys’ warped ‘planning’. Their efficiency at work is lower because of a poor quality of life – poorer health because of pollution, water quality, low quality hospitals, low quality schools, long commute times. A businessman thinking long term would ensure that his employees’ needs are met first.

In some ways the Bolly is more dangerous than the earlier lot of Ollys, because his influence on government is not obvious, while the influence of the other Ollys was transparent. A lot of poorly thought out ideas have been pushed through by innocuous-sounding Bolly clubs like the now-defunct BATF (Bangalore Agenda Task Force) and more recently, the BPAC.

Just a couple of examples would suffice to illustrate the selective, contradictory efforts of the BPAC. In its agenda, the Committee recommends implementation of something called the Karnataka Information Communication Technology Group report. This has 12 sections, of which 11 talk about improving the IT sector. No other industries or businesses are even mentioned. Eleven sections for improving IT, one section for improving Bangalore.

Democracy pits a few with money power against the many with participation power. In a true democracy the latter has the upper hand. In Bangalore (as in the rest of Karnataka, actually) money power is winning, making the state a business enterprise to maximize the wealth of a few rather than to ensure the welfare of its citizens.

About G V Dasarathi 6 Articles
The author has not yet added any personal or biographical info to her or his author profile.

The things people do around Vibhutipura lake

If you live near a lake in Bengaluru, you’re sure to visit it for a variety of reasons – birding, exercise, photography, fishing – the list is endless. Sanchayan Nath documents the various activities that happen around Vibhutipura lake.