Shobha Karandlaje, Yeshwanthpur MLA and former BJP minister, is busy with her election campaign. She is the KJP candidate for Rajaji Nagar constituency this time, and is up for some serious competition against BJP minister S Suresh Kumar.

She had handled three portfolios – Rural Development, Energy and Food, Civil Supplies and Consumer Affairs – in the ministry earlier. She was also the only woman member in the ministry.

Citizen Matters caught up with Shobha in the KJP office in Malleswaram one afternoon. Moving from one meeting to the next, Shobha apologised for the delay many times before giving this exclusive interview. 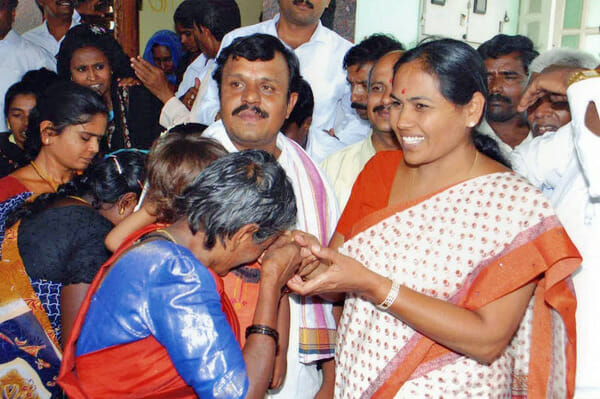 What are the issues you identify in Rajaji Nagar constituency? What plans do you have for it?

Infrastructure problem – drinking water, drainage, roads. Social programmes like Bhagyalakshmi and BPL cards have not reached people. There is need for an overbridge from Majestic towards Rajajinagar. Currently, those who come to the railway station or bus stand from out of the city have to go through Okalipuram to reach Rajajinagar. With an overbridge by the BBMP or the BDA, people can avoid the traffic in Okalipuram and travel between railway station/Rajajinagar directly.

I am just studying the problems here. We need a master plan for Rajajinagar and make it a model constituency. Rajajinagar is the oldest layout in Bangalore. Master plan is needed for roads, housing, drainage – everything. For the first 2-3 years, I will attend to the main problems in the constituency – the day-to-day problems of people.

How would you rate Rajajinagar among other constituencies?

It is one of the backward constituencies. I don’t know about other constituencies because I have not studied them. Development programmes are not happening here. I thought that this constituency did not have any problems, but now when I am going around, I am finding problems.

As both minister and MLA, have you been able to do justice to your constituency, Yeshwanthpur?

Yes, if you are in government, it is easy to do. If you are in opposition, you will have to fight. There was a chance for Suresh Kumar to work in his constituency. As the BWSSB minister, he was in charge of both drinking water and drainage, but nothing was done.

Suresh Kumar is a political heavyweight who already has support in Rajajinagar. Will this be a tough battle for you?

Yes, it is a tough battle. He has been the MLA from here for the last 15 years. But people are now asking what he has done. I am not asking this and I am not mentioning his name to anyone. But this is what people say (smiles).

What are your achievements in Yeshwanthpur, your current constituency?

The roads there are beautiful. Roads are done well even in rural areas by PWD; there are both concrete and asphalt roads. In Tavarakere hobli, there is 24 hours power now; earlier, there used to be no power there most of the time. I have developed 14 lakes including Herohalli, Kommaghatta, Ullal etc., and drainage and water supply in some areas. I am also planning two hospitals in Kengeri and Kaggalipura, and work on this is going on. The BDA, BBMP, PWD and Rural Development departments have contributed a lot there. (Citizen Matters has not verified any of these claims)

Why did you decide to contest from Rajajinagar instead of Yeshwanthpur?

Our party is divided – workers and voters are divided there. I had thought of concentrating in organising the party, and did not want to contest the election this time. But party elders asked me to contest; they said that it will send a wrong message to the state as there are only a few women MLAs in general.

In Rajajinagar, 80% of BJP workers had resigned from BJP before I did; they were fed up. I already have support here. They suggested me to contest.

What challenges did you face as an MLA?

As MLA, I never faced any challenges. All my officers did good work. If they didn’t work, I would suspend them. I told them that I am bringing money, so they have to work. I never had personal meetings with them, only official ones. I never thought that because I was a woman I could not work.

Women are a minority in the assembly; so any hurdles you faced because of that?

No, I never thought like that. You have to study the department, that’s all. You have to take statistics, get data, talk properly.

As minister, you had held the drive to weed out illegal LPG connections and ration cards. But there were many complaints and resentment about the drive. Has this affected your image?

Through the drive, I am saving Rs 500 cr for the government now. We had cut only illegal connections. The state had 1.01 crore households, while the number of connections was 1.07 crore – there were more LPG connections than households.

In the case of big households with more than one connection, they cannot manage with one connection. For them I did not insist. Connection was retained for all those who submitted records. The excess connections are because LPG is supplied to garages, puncture shops etc. The drive will not affect votes – public only want ration card/LPG for themselves, they are not worried about government cutting illegal connections.

Are there any projects you wanted to do in your constituency, but could not?

I wanted to do more things – it is a rural area and more programmes were needed. I did my bit for five years, now the next elected person has to do more.

As a senior KJP representative, what specific solutions do you propose for Bangalore’s garbage and water shortage problems?

We have to study what other countries and cities have done. Even before Yeddyurappa became a minister or MLA, he went to an area in Tamil Nadu – I forgot the name of that place – and recommended the waste management model to government, but government did not do this. Waste management should be scientifically studied and planned – we will do this.

We will connect all rivers in the state to address water shortage. There are 20,000 villages in the state that get polluted, poisoned water – so potable water should be made available. Water for Bangalore can be taken from Hemavathi river.

Should commercial/ residential developments be capped in the city, in areas that have neither BWSSB nor borewell water supply?

Yes, this should be done. The 110 newly added villages in BBMP should also get potable water. For that, development within city should be capped. It can be done – only the will to do this is needed.

Saying she had a tight schedule, Shobha excused herself from the interview and went ahead to meet others waiting for her.⊕

What to do if the government cannot fix the broken streets and parks? Simple: do it on your own. This is the motto with which Whitefield Rising has been working.

No teeth to fight terror

By most accounts, the city and state remain ill-equipped to fight terror. A dedicated squad is yet to come into existence, and all of Karnataka has only one bomb squad, which is stationed in Bangalore.

The “Let’s Save a Billion Watts” campaign is educating children throughout India to save energy. Here’s how members of civic clubs in various city schools are actively pursuing this initiative in their homes and outside.