On 15th Apr 2013, the third Monday of April, celebrated as Patriots’ Day in the USA and also the day of the world’s most popular marathon – the Boston Marathon, 3 people were killed and over 140 injured due to bomb blasts close to the finishing line, at around 4 hours and 10 minutes into the marathon. It is now known that all three of the unfortunate victims who died in the bomb blasts at Boston, were spectators who had come to cheer their friends and others in the race. Several of the injured were also spectators.

If this had happened a little over a decade ago, before September 2001 (9/11), most Indians living in India would have treated this as just a violent incident perpetrated by malevolent elements and perhaps left it at that, especially given the number of violent incidents in our own country. Post 9/11, those perceptions have changed. 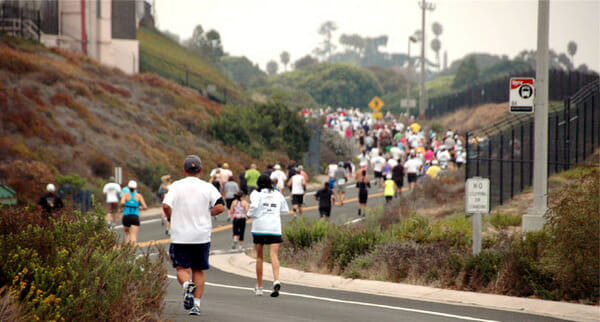 A scene from the marathon. Pic courtesy: baa.org

Given the increased interest of Indians at running as well as the number of Indians participating in global marathons over the past decade, this is no longer just an incident threatening US homeland security alone. There were 15 Indian residents and several more of Indian origin among the 23000 odd runners at Boston on Monday. Further, several of the runners participating in the race on Monday, were friends of various runners in India, in this increasingly shrinking and networked world. As a result, there were a lot of Indians staying late into the night trying to ascertain if their family and friends in Boston on that day were safe.

Two of the most common expressions used in various reports discussing this incident, which flooded the Internet last week are outrage and violation of space. Most people (runners or otherwise) around the world are understandably upset with this unprovoked attack on innocent people. Runners in particular, are also upset with what is seen as a violent breach of their space, albeit a shared, public one. Amby Burfoot, the winner of the Boston Marathon in 1968 and also the Editor of Runner’s World, who was a little over half a mile from the finish line when the blasts happened, has remarked how just being on the road as a runner represents an important part of the free and democratic tradition and hoped that things wouldn’t change in the future.

What will undoubtedly change are race logistics and other operational aspects around the race. Just like 9/11 irrevocably complicated airport security globally, runners will no longer be able to breeze in and out of race baggage counters. There will be increased policing along race routes making it that much more difficult and definitely less enjoyable to be a spectator watching runners in races. It will also be difficult for non-runners even if they are family members of runners to connect with them before and after the races anywhere close to the race route and venues.

Runners themselves will perhaps need increased identification for authentication purposes. And all of these additional measures will invariably make running more expensive – at least in terms of time spent not running, in addition to costs associated with attending races. And there will be some people especially those new to running who’ll wonder what they are getting into and if it is worth it.

Further, one cannot underestimate the paranoia that invariably accompanies such incidents. For example, conversation between non-English speakers as well as simple tasks such as setting down your items that belong to you or baggage and perhaps inadvertently forgetting them, will be viewed with suspicion. Several such things will change and not necessarily make the life of runners easier.

The last such significant incident on US soil was at the Atlanta Olympics in 1996, which thankfully didn’t mar the rest of that event or affect other sporting events in the US and elsewhere, except perhaps for enhanced security measures.. Let’s hope that this one doesn’t leave any more scars beyond the ones it has, already.⊕

BBMP budget 2022-23: Midnight drama could see many city roads dug up all over again

BBMP has allocated around Rs 10,480 cr for Bengaluru in 2022-23. A large portion of the funds are expected to come from taxes and state government grants.

Bloggers, unite for a seven-day blogging epic to get together and voice your concerns, opinion and solutions to matters of social importance that India faces every day.