Sometimes, a rare plant can be found practically at one’s own doorstep! I’d gone with a few friends to the Arikere Reserve Forest, which is just about 4km from where I live. There, we spotted these unusual-looking flowers, which made us feel that it might be a carnivorous insect-eating plant, like the Venus Flytrap, and we took some photographs. 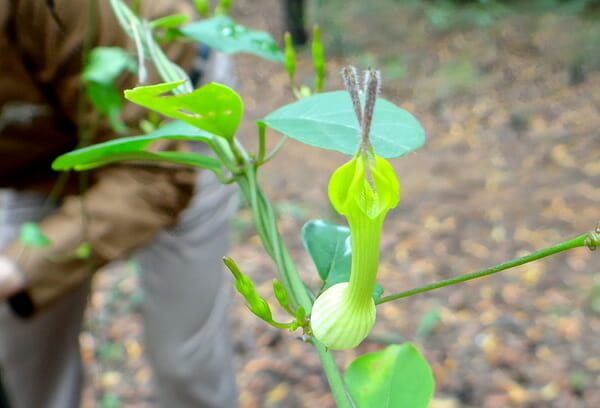 When my friend Poornima Kannan googled out some information about the plant, we realised that it was not a carnivorous plant… but even smarter than that! The scientific name of the plant is Ceropegia Candelabrum (the second part, no doubt, referring to the candle-like structure on the flower).

The flower actually traps flies, and releases them later, unharmed, so that  they can go and sit on other flowers of the same kind, and pollinate them!

The fly, which enters the flower for its nectar, becomes trapped in the bulbous that you can see in the base. After a few days, when the hairs leading to the bulbous chamber wither, the insect can fly out, bearing on its legs and body, the pollen that will enable other plants to be fertilized and reproduce.

This species (Ceropegia) was in the list of critically-endangered plants  published by International Union for Conservation of Nature. Thanks to the efforts of conservationists, it has been now classified as ‘rare.’

So, it is important not to destroy unknown plants heedlessly. We may be unknowingly destroying something of great value!

Here is another link which gives information, and the many names of this rare plant, which is used both as a vegetable and as a medicine… which my friends and I were lucky to find in profusion, so close to my home!

You can also read about the Candelabrum Plant on Poornima Kannan’s blog.

We were together when we found it, and it’s been a great learning experience for us, that the rarest gems can be found quite easily sometimes!⊕

A whiff of Malleswaram

Malleswaram in Northwest Bangalore has something to offer to everyone — temples, heritage houses, good shopping bargains, and patches of green amidst all the concrete.

Brush strokes of the real and surreal

Four young artists put together an exhibition of their art work recently at Chitrakala Parishath. Their works brought out varied interpretations of the subconscious and the visible.