“Politics is bad; it is horrible. Politicians are scoundrels. So what should we do apart from talking? Just because the air is polluted doesn’t mean you stop breathing. Hope, organisation, honest effort and action will take us to a better tomorrow.”

This is what Dr. Priya Dharshini S V, who is contesting from Rajarajeshwari Nagar under JD(U) banner says in her Facebook post. A doctor-turned-lawyer, ex-IAS officer, mother of two, Dr Priya practises at Karnataka High Court, Supreme Court and International courts. 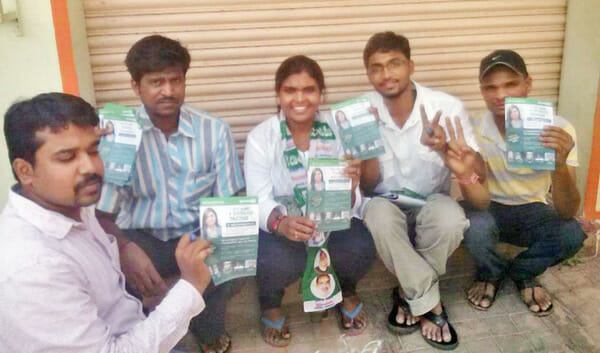 Meet the new breed of electoral contestants: urban, highly educated, tech-savvy; yet service-minded and accessible. Many are first-time candidates who have decided to take the plunge into electoral politics. Why? “Because they realise that better politics is the answer to the problems of people; and if they want better politics, they need to get onto the ballot,” says Srinivas Alavilli, a member of Loksatta party.

‘I am the change’

The anti-corruption movement spearheaded by Anna Hazare, Arvind Kejriwal and the likes triggered a new wave of civic awareness. This also led to the launch of new parties like Aam Aadmi Party, which are contesting on the basis of fighting corruption and reaching out to the young and untouched base of voters.

“There are a large number of people looking for change. They will support us,” says Vijay Sharma, in charge of north Karnataka districts for Aam Aadmi Party. However, AAP is not contesting in Karnataka election this time, as the party is still in very initial stage.

Sridhar Pabbisetty was working as Chief Operating Officer at the Indian Institute of Management-Bangalore’s Centre for Public Policy. He also worked with the government of Karnataka for the ‘Sakala’  programme. He has quit his post and plunged into electoral politics, to contest as a candidate for Loksatta party from Hebbal. 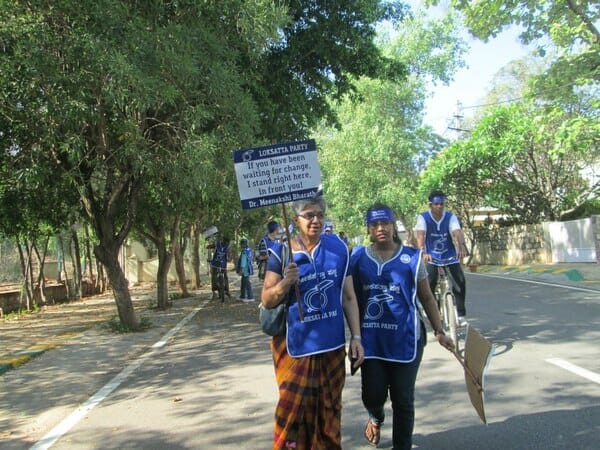 Meenakshi Bharat is another doctor-turned-activist-turned-politician, who is contesting from Malleshwaram as a Loksatta party candidate. She has been very actively campaign for better management of waste and cleaner Malleswaram.”We have to work on issues that affect you and me. If we all come together- and this is the crux of the matter- if we manage to come together because it is our lifeline- we can do so much more with our resources. We must take this step politically, socially and individually,” she appeals in her Facebook post.

Fifty six-year-old Sumitra Iyengar, managing director of Kalanji Valley Heights, is contesting from Padmanaabha Nagar as a Loksatta party candidate. “Frustration about what we wanted, what we are getting and what is lacking motivated me to join politics.” she explains. Her fellow Loksatta party colleague, Yogaiah VC, 59, a retired Indian Airforce officer and principal of ALT Training College in Sarjapura Road, is contesting from Byatarayanapura.

While candidates of major political parties have the party fund and big banners to support them, some of these first-timers are trying to raise funds from citizens and like-minded people.

Shanthala Damle, 39, a software professional contesting from Basavanagudi as a Loksatta candidate and Nagesh Vikas Sakhare, 29, a software engineer working in DELL, contesting from Belgaum raised money from the public. They feel that this way they would be accountable to people if they get elected. Shanthala’s site gives details of funds raised (around 6+ lakhs) and expenditure.

Dr. Meenakshi Bharath, who is a contestant from Malleshwaram, has launched a campaign called ‘Zero Rupee Campaign’, with a tagline, ‘Because we don’t buy our votes, we choose to earn it’. Those who want to donate money for the campaign can do so via cheque or bank transfer. She wants to fight the elections through ‘clean money’.

Priya Dharshini says she cannot spend more than 3-4 lakh rupees on the campaign, though the spending limit is 16 lakh rupees. Key factor is, all of them want to demonstrate the voters that they stand up for clean politics, free of corruption, thus instilling a sense of confidence among voters from the very beginning itself.

So how does this new breed of contestants reach out to the voters? While many of the candidates use social networking sites like Facebook or Twitter, some of these first timers have nothing. Candidates who are contesting from regions where there is not even proper electricity supply rely just on door-to-door campaign and word-of-mouth publicity. Some candidates like Meenakshi Bharath and Ashwin Mahesh, who is standing from Bommanahalli, go for door-to-door campaigns. They are also very active on their Facebook pages, providing information on their campaigns and posting their thoughtful insights that might help attract the educated lot.

Yogesh Devaraj is contesting as an independent candidate from Bommanahalli. Being in Information Technology field for 20 years, he felt the need to work for society and quit his job. He also worked as one of the city coordinators for India Against Corruption. “ I’m doing door to door campaign, and online campaigns through Facebook and emails.  Though IAC is not supporting any candidate, I have local support from IAC members whom I personally know. There is a pool of 50-60 people who are part of the campaign team – they can’t do campaign work daily as they have other commitments, but work depending on their schedules,” he explains his campaign style.

What do they promise to the voters, in their  campaigns? “I don’t have a detailed manifesto; long manifestos are a joke in reality as they hardly get implemented,” says  Yogesh Devaraj.

In the era of instant ‘like’s and ‘plus’es, online campaign has proved to be important. Many existing MLAs like Ashwath Narayan from Malleshwaram constituency can be seen using Google ads and other online advertising tools to reach out to the electorates. Priya Dharshini shares her approach: “I am reaching out to people through Facebook. As I’m contesting from an urban area, most youngsters here have Facebook accounts. Being on Facebook helps me reach out and converse with various people, and to get inputs from them.”

Do the candidates expect votes from the Facebook users who hook to the computer? Their expectations are realistic. “Though people talk about issues on FB, I feel that most of them won’t vote or will not engage further with politics – they still see politics as dirty,” says Priya Dharshini.

Silver linings in the dark scene?

So how are people reacting to the new wave in politics? Ashwin Mahesh, a contestant form Loksatta party, shares in his Facebook post: “People are fed up and angry with ALL politicians, so even if someone tries to change the system, they have no way of distinguishing this, at first glance, from anyone else who has ever asked for their vote. It takes a while to clear that air of disbelief.” 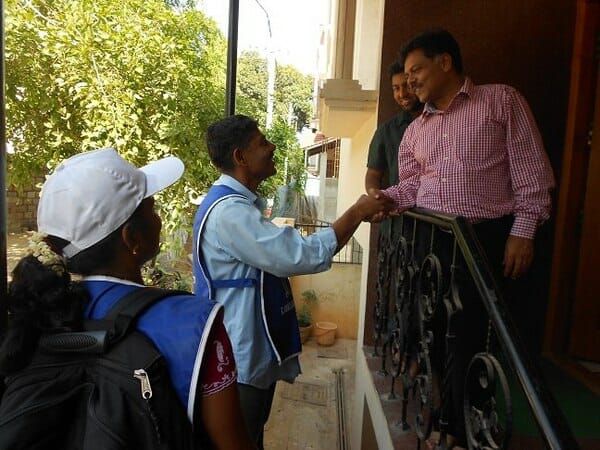 Writer and software engineer Ravi Krishna Reddy, 38, contesting elections from BTM Layout as a Loksatta candidate, points that the biggest challenge today is to bring the educated middle class section of society to vote. “The situation across the state is the same, the poor people are influenced and the rich do not care. But the ones who are truly affected are the middle class and they do not trust the system,” he regrets.

The central impact new and reformist-minded candidates have had all around the democratic world is that they bring new voters to the polling booths on the election day. These are voters who may not have voted at all earlier. Bringing new and often younger voters to the polls is an impact itself. The real question is whether enough new voters will turn up to swing the precious vote share to tilt the races or even win a few races.

The larger impact may also come from the campaigning. Whether the new candidates win or not, if they bring large groups of youngsters into the process and those people feel they can believe in politics again, and if that sustains even after the elections, that will be make an everlasting impact. – Ed

Nevertheless, the new breed of candidates may be successful in instilling some hope among the frustrated lot of voters. Says Naina K, a Bangalore-based accounts officer: “I do not want to vote, because all the candidates are the same – corrupt and worse than the other. But if there are fresh faces from a fresh party, I can give it a thought… Young candidates are a welcome move, but they should not be the son or daughter of a present political figure.”’

Sheela M, a housewife residing in Nayandanahalli, says: “I would like to vote for a person like Kejriwal or a person who is a social worker contesting elections. It does not matter if he has not campaigned in my area but it is better to vote for a new hard working person than to an existing person who never works.”

Aditya S, a first time voter, says that he does not care whether the candidate is from a party which fasts or throws feasts. All that matters is that the person is hard working and has done some service to society. “Presently we have seen that all the money is reaching the hands of a selected few. I want to vote for the best person, as I believe that each vote makes a difference.”

However, not everybody is supportive of these first-timers. “They won’t win by campaigning on Facebook. Facebook users don’t go out to vote. Moreover, those who ‘like’ the campaign pages need not be from the area of the candidates,” says Manjunath, a resident of Malleshwaram.

Vishwanath, a retired BBMP revenue inspector, dismisses the possibility of victory for such candidates. “What have they done to prove their credentials? Education and ideals don’t work in politics, one needs to demonstrate leadership capacities,” he asserts.

Mohandas Pai, Vice President of the Bangalore Political Action Committee, explains the above point. "If they want to be successful they need to build up a track record of public service. Being good people alone is not enough to get the trust of the electorate. They should build up grass root support as in the UK and the USA. The first step is to contest the city council elections for which they have to have an office in a ward, interact with citizens, solve their issues, demonstrate their commitment to citizens, win their trust, build up a support base, enter the council and demonstrate performance," Pai remarks.⊕

No One Killed Jessica: important, Life As You know It: eminently watchable

As 2011 begins, No One Killed Jessica is amongst the new year’s most curiously watched releases in India. Life as We Know It also gave families a reason to smile.

Ministers and MPs to meet on June 25th, to decide on reorganising Bengaluru

If you drop in to Kempegowda Bus Stand (Majestic) on 15th and 16th, you might be able to get a bus to your destination without reservation. On the other hand, if you decide to reserve your tickets, you will be saving some money too.