"Ticket!!!" he screams at me, looking scandalised about the fact that the bus had already left from the bus stop and I didn’t have a ticket yet. "13 rupees. Ticket!!!" he exclaims, as I pull out a 20 rupee note, due to the lack of loose change. He throws me a look venomous enough to turn Medusa herself into a stone. Ashamed of myself for not carrying change, I quietly allow myself to be pulled, pushed and generally tossed in every direction as the driver ensures that the speed breakers don’t fulfil their purpose. 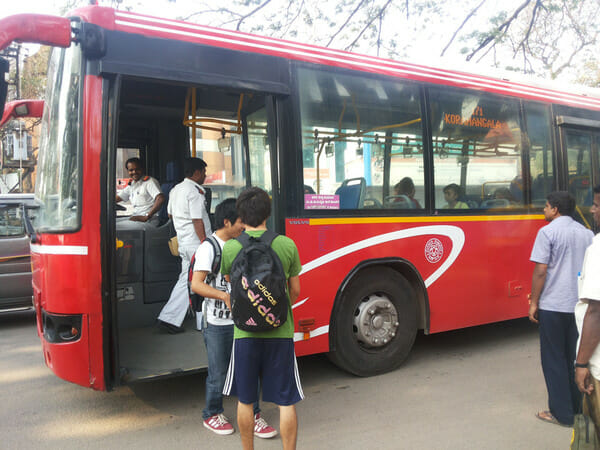 Volvo buses usually have some space to sit Pic: Shree

Bus journeys in Bangalore are probably the worst sentence you could give to a criminal. Murdered someone? Get on a bus for three hours with no sitting space; you’ll be begging for the gallows within ten minutes. It is violent, disgusting, strenuous and downright unhygienic to travel in public buses during peak commute hours. The prospect of paying a bus ticket with the exact amount of change to an extremely cranky and juvenile bus conductor would seem like a trip to Disneyland if you have had the misfortune of being forced to hang onto the doors of the bus as all your body, except your wrist, hangs outside the bus like a flag, bearing testament to the fact that the bus is indeed full. People from all walks of life push against your torso, many of them reeking of booze or stinking with sweat. And, to top it all, the very people pushing against you to take up the paltry amount of space you’re occupying, would glare at you as though you were a leper in their midst if you did so much as shift your weight.

I thought that this was the scenario with only the normal, public buses. For a while, I always thought that the swank, bright red Volvo buses were much better to travel in. For one, they had A/Cs. For some reason, there was almost always sitting space in these buses (or so it seemed, as you stare at them from the bus stand, cursing your pitiful allowance that refuses to allow you to board one of those beasts) And also, the people that board these Volvo buses are more civilised and easier to communicate with. Or so I thought.

Tuesday evening, 8 pm. I was waiting at a bus stop outside the St. Joseph’s PU College for a bright red 335E to grace me with its presence, and take me home after a long and particularly tiring day. After about five minutes, not one, but two 335Es were hurtling down my way. I furiously waved my hands about in every possible motion to catch the big, red beast’s attention and get its driver to stop. The driver, however, had other plans that he made evident as he swerved the bus away from the stop and gave me a sadistically exaggerated smile. Like the naïve kid I was proving to be, I tried flagging down Driver No. 2 as well. All he gave me in return for my brand of chicken-esque arm flapping, was a vigorous shaking of his bald head, as he shot past the stop. And there I was, stuck at the damn bus stand for another hour and a half.

I guess there’s a certain feeling of power that envelopes these bus-drivers. After all, the bus is one of the biggest vehicles on the city roads. What in the world does a bus driver need to be afraid of? Nothing. Absolutely nothing. Is he drunk? Not driving properly? Big deal. One more two-wheeler lands up under his mighty wheels, thats all. But, the reign of the bus driver might be coming to an end as the city embraces a larger, faster and more dangerous monster. I extend a warm welcome to the Bangalore Metro. Hopefully, these guys would actually give a damn about their customers, unlike their four-wheeled, rear engined counterparts.⊕

About Aditya Shankar 1 Article
The author has not yet added any personal or biographical info to her or his author profile.