In the run up to elections in Karnataka, a nationally telecast TV news programme last weekend focussed on the massive deterioration of civic life in Bengaluru. On display was the breakdown of garbage management, water supply, rise of the contractor and tanker mafia and the link to politicians, the state’s political parties becoming personality-led factions and in all, a capital city and the silicon valley of India hopelessly caught in a disastrous spiral.

Citizen Matters was interviewed for the telecast as well. It ended though with a hopeful note that when voters have a chance to reverse things. (Headlines Today, ‘Bangalore Civic Mess’). After I watched it, I felt I have another story to tell about Bengaluru today. I will use two metaphors for it, one from agriculture and the second from outer space. 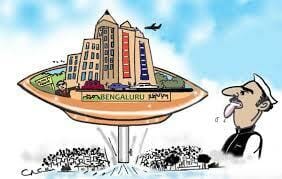 Before that, a small anecdote. The chaotic state of affairs in the city is a telling reality we experience every single day. But it came home to me more emotionally and sadly when I met two youngsters from the Belgaum region at an expo in Whitefield last year. Like so many youngsters from tier-3 MBA colleges in the northern hinterland of Karnataka, they had to come to the great capital city for the one key thing that 20-plus youth rate highly – jobs. And jobs they did get. Both these youngsters were working in a local logistics firm in the city and in a casual conversation at the Citizen Matters stall, they shocked me with a single statement:

“Sir, we have to decided to leave Bangalore and go back to Belgaum”.

“Why?” I asked, still wondering whether I had heard them right.

And then came an outpouring of grief. When they came here they thought they could relate to their capital city to their future; but what they did not account for was the massive traffic, constant construction, lost tempers on the roads and rage, the furious pace of everything on weekdays and a sinking feeling of a floating identity crisis in a big bad city. That Kannada is no longer spoken and heard on the streets in a widespread way made it worse, they told me, but mind you, these youth speak Hindi and English anyway.

It is not that their jobs were not paying either. They said they felt let down. They could simply go back and work in a bank, or start a business which was anyway a dream, they added. A little more conversation and I start hearing from them about other youngsters who had already gone back in 2011, frustrated with the stress of living in Bengaluru.

This is just really small side effect of something else that has gone totally wrong in the city. It is not just about government failing or politicians alone messing up.

I look at Bangalore as a city whose development has been put on steroids on the last ten years, with no plan whatsoever for the natural resources that are needed to support this super fast growth. If Bengaluru were a person running in a competition, s/he would fail every dope test.

During India’s green revolution, farmers figured out quickly that they can boost crop yields by pumping in fertilisers and pesticides. If you overdo this, this result usually is that yield goes high for some time, and then the soil collapses, devoid of everything. Nothing will grow well after that. Poisoned soil leads to contaminated water and food. Bringing this soil back to life takes years again.

The politician-babu-industry nexus in Karnataka has done precisely this to Bangalore. Industrialisation brings jobs at every level and triggers a chain reaction of economic activity that every government wants to drive. Nothing inherently wrong there. But when your political party system is funded in mostly black money in part from the approval-and-permission raj we still run, greed and recklessness always take the centrestage at decision makers’ tables.

You know the results. This city has truly become a real estate playground. The Survey Department lost track of Bengaluru’s original land ownership maps in the 1970s. The BDA uses its own maps. Lakes have now been run over, public land being gifted by corrupt ministers and bureaucrats to private interests, and illegal buildings have mushroomed all around the city. Scores of buildings and heavily trafficked pathways have emerged in the neighbourhoods that are least suited to take such load. Imagine a massive apartment community coming up off a 30-feet road. It will only take a few hundred cars and a few water tankers to mess up things at 8 am.

In 2010, the city commissioner had quietly shut down an important vigilance call centre that was processing whistleblower alerts on illegal buildings and seeing rising complaints. Citizen Matters exposed this.

The demand for water has led to massive drilling of borewells which are predictably drying up; landfills located in nearby village areas have been topped up with muck so much that they have eventually collapsed. Near-riotous situations have prevailed for years at some of the worst landfills, where our garbage has poisoned villagers’ lands, water and hygiene. Not surprisingly, crisis erupted in 2012.

Respectable cities around the world use natural resource-based planning to balance, regulate, mediate and even cap growth, while on the other hand accelerating where it can still work — some of the greatest cities in the world are run this way. In Bengaluru, Karnataka’s messy politics has not only not done this, but has put the system on steroids. So then you end up with what reckless farmers sometimes do to their own soil. Kill it.

This is what we have now: a waterless city, with land grabs ongoing, polluted lakes, persistent flooding risks when monsoons arrive since the exit channels (rajakaluves and other minor drains) for storm water runoff have been built over in many areas, roads repeatedly dug up by water supply, electricity and municipal authorities with no coordination, and of course massive traffic snarls and pollution. Water harvesting has only made a beginning, in part because some real estate developers are now using RWH to create groundwater sourced 24/7 water supply and cutting off reliance on tankers and the city’s water utility. But these projects are few and far between even today.

Over 40% of the city’s piped water is unaccounted for — courtesy leakages and theft  — and our officials have shamelessly come up with an abbreviation for it: UFW. It is almost as if denoting it this way somehow legitimises the problem and takes it off their hands.

Real estate investors – citizens and firms – have played a role too. In addition to resident Bangaloreans themselves, citizens from New Delhi, Mumbai, Gurgaon, Pune, Sydney, San Francisco, San Jose, New York, Chicago, Houston, London, Dubai, Singapore, Hong Kong, and you name it, both Indians as well as NRIs and PIOs, have all ‘invested’ in apartments and homes in Bangalore. Everyone with access to capital and land has gotten rich in the name of investing in a property in Bangalore. Yet, some of this has happened with buyers not having a clue to where the water will come from, where the garbage will go, whether the permissions were legal, whether the land itself is clear of title disputes, etc.

In fact, such is our penchant for putting savings into land (it only comes next to gold), that real estate developers find it relatively easy to trick us with crafty graphics and a little poetry.

‘A piece of Spain in the Bengaluru!’ yelled one silly hoarding, missing the point that Spain is in deep economic shock, what with Barcelona (Catalonia) threatening to break loose in 2014. This is Spain’s own Telengana. ‘A home and landscape where you get clear unpolluted air and tranquility’ is a common refrain in other advertisements. We need tranquilisers to use on the citizens who get into road rage first, before buying tranquility itself!

The psychology of an investor who is not going to settle into a residential property is different from the one who is buying an apartment or a home to live there. Investors simply assume the demand for housing will always be high enough in India’s mega cities that they can sell and exit the asset regardless of the underlying fundamentals. That the water tanker mafia may one day lay siege is not a worry. That land on which their homes have been built inside ‘layouts’ may be snatched by the stroke of the pen or a verdict of a court is a reality that people wake up to one morning and then panic.

Shining saucer suspended above us

I also look at Bangalore through another metaphor. So disconnected is the sheen of jobs and money from the rest of the real city, it sometimes feels like we have built this giant shining saucer and it suspended at 10,000 feet above the real land of this city. And there is one single pipe holding up the saucer – our suspended city – above.

Through this pipe, water, services, resources and low-income jobs are sucked through to the fast-paced life above. Life on the saucer is different – fancy and glossy buildings stand tall, cars zip around, and ‘tranquility’ and ‘live in espana or scotland’ is paraded for the stressed souls.

The pipe though is now bursting at the seams, because the social fabric that holds it together is seeing unrest and cracks. So some day, in my nightmare, the pipe will give way and the shining saucer above will simply crash to the ground, crushing lives. One fracture will be water, there may be others. Before that kind of crash happens, society hopefully will reverse the course, though by then a lot of damage would have already happened.

This is no pipe-dream, if you pardon the pun. The next article in this series will show you a real example from 2012.⊕

Know the boundary of your new ward

With the delimitation of Bengaluru’s 198 wards, this new website will help you know the boundary of your ward and localities through interactive maps.

Personal hygiene is critical to fighting corona, but what if we run out of water?

Handwashing and personal hygiene are critical to protecting ourselves from coronavirus. But as summer approaches, Bengaluru faces the threat of water scarcity again. How can authorities and citizens handle this problem?

We have to do it. So let us make a start.