Narendra Babu‘s phone keeps ringing. Some are from his office, but many are by the voters of his constituency. One such phone call is from a worried woman whose child has to undergo an operation; she doesn’t have funds. Her husband is an auto driver. They are not sure how to get government aid. He tells her to meet him along with all related documents if any, at his office on Monday or Thursday, during the official public meetings.

The venue is Anushrutha Foundation, his NGO, a little ahead of his office-cum-residence. Another woman who has come to the NGO wants to get her daughter admitted to a school but doesn’t have any funds. The mother has cleared seventh standard and is not sure if she can get a job to support the family. The MLA tells his PA to take her details and tries to give two or three solutions. 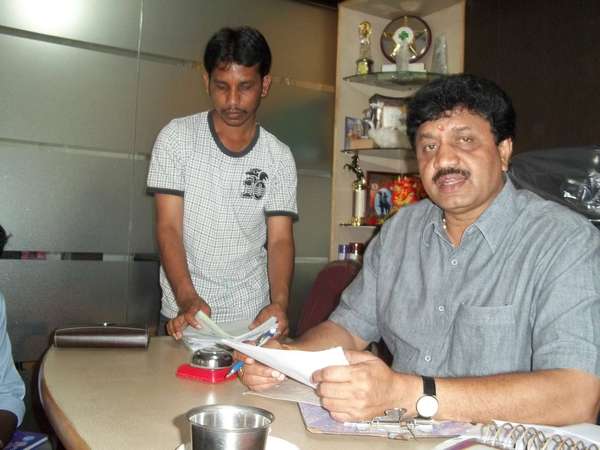 While doing all this, he’s also scrutinising and signing probably the applications for Aadhar cards, BPL cards etc. Two German economics students are visiting his office to see and experience what it is like to be a legislator in India. As I start asking the questions, he flips out his Samsung tablet and shows our website to the German students.

On his request, I visit all the floors of the building which imparts skills and training to urban poor and lower middle class. The courses vary from basic computer courses to English classes, tailoring and interior decoration to beautician’s courses.

Some from higher economic strata also volunteer here. He insists his vision could be executed only because of a dedicated team effort and quite proudly shows each floor to me and the German students.

How does he bear the costs of running an NGO, I ask. He replies that they get donations from philanthropists and well-wishers. It does not come under the Government scheme, he states. As I start the barrage of questions, the MLA continues with his multi-tasking, speaking in Kannada and occasionally translating in English to the Germans.

The biggest problem is water. Then of course there’s housing, unemployment, school admissions and law and order.

The other problems are civic-related issues, for example, storm water drains cleaning. The civic issues need much co-operation from the BBMP.

What are the projects executed by you as MLA? Can you give us some details of significant achievements/contributions from 2008 to 2013?

Using the JNNURM funds, I have successfully installed a Ground Water Reservoir (GLR) of 9 MLD capacity of water. The GLR cost six crore rupees with another two crores for the pipeline and connection. This connects to Cauvery IVth stage, phase II. Out of the seven wards, it helps solve the water problems of two wards – 43 and 45 – and also, partly, to wards 75 and 68.

Also, did I tell you about the padayatra we initiated to bring water from Western Ghats to Bangalore? However, the environmentalists have opposed the initiative.

But aren’t they right? Especially now that the region has been declared as World Heritage zone by the UNESCO.

Well, Bangalore is growing and it needs water. Can you give me a better solution?

You asked 233 questions in the Assembly. Did any of your questions get responses that helped your constituents?

Several. I can’t tell you offhand but if you show me the questions, I can give the status.

According to the DC’s office, LAD funds were sanctioned for about 70 works. What kind of works were these? Was it possible to do all these works with the LAD funds?

We get one crore annually as LAD. This is hardly enough for a constituency. I have used around ninety nine per cent of the funds, mostly for education – Anganwadi schools, water supply, environment, welfare etc.

What do you suggest is the ideal amount of LAD that has to be provided to the MLAs?

Funds should be released considering various factors such as population, necessity etc. of the constituency. It should also be categorised under various sectors such as education, infrastructure, health, welfare, youth empowerment and housing.

What are the key problems/challenges faced by MLA?

The biggest problem is inaccessibility to the BBMP commissioner. No, don’t write it down because I say so. I’ll call him. (Flips out his cell phone and calls the BBMP office. After quite some time, someone picks up and informs him that the commissioner is busy in a meeting.)

Most of our problems need co-operation from the BBMP, otherwise they do not get solved.

One of the biggest problems of the city is garbage. How do you ensure proper waste management and segregation of waste?

(Takes out his tablet and shows the photographs of segregation of residential waste) See, the system should be in place. The waste segregated later gets mixed because the system is not in place. The collecting vehicles should be colour-coded for the type of waste. We have ensured these points in the new tenders, but work orders are not issued to the new contractors and the old vendors stick to the old ways.

Three key reasons why the voters should vote for you again?

I have kept up my word, my promises. I am accessible to my people around the clock and I have maintained my wards well.⊕

The city’s road construction and widening projects appear to be stirring up one storm after another. This time, BBMP’s approach confuses J P Nagar residents.

In an interview to Citizen Matters, Shobha reveals that being a woman was no hindrance for her performance as minister.