The space beyond Wipro’s corporate office in Sarjapur has been projected as the new Whitefield of Bangalore. There are many real estate development projects on the Sarjapur-Attibele road which is under the Sarjapura Gram Panchayat and Bangalore Metropolitan Region Development Authority (BMRDA).

As a resident of the area since August 2012, I have been told that real estate developers or builders, started advertising their plans from the late 1990’s or early 2000. These developers vie with each other to portray how big they are and dangle the list of amenities in newly constructed or upcoming buildings, on large hoardings across the city to lure gullible customers.

Acres of agricultural land rendered infertile are sold to these developers who build high-rises that boast as many as 60 elegant amenities, sometimes. Many real estate companies such as Confident Group, Krystal, CitiLight, Faith Ecospace, Shriram, Mayur and others have bought lands.

If you drive south from Wipro’s corporate office, you will see barren fields with concrete dumped in them. Only tiny patches of green remain. You will also find many commercial establishments, mostly hardware stores, that signify the inevitable concrete jungle to come. Many people have bought homes here, trusting the garrulous builders who promised development and easy access to the heart of the city. They witnessed more environmental exploitation, all in the name of development – depleting ground water, acres of dry land, cropping up of alcohol shops and more shanties. 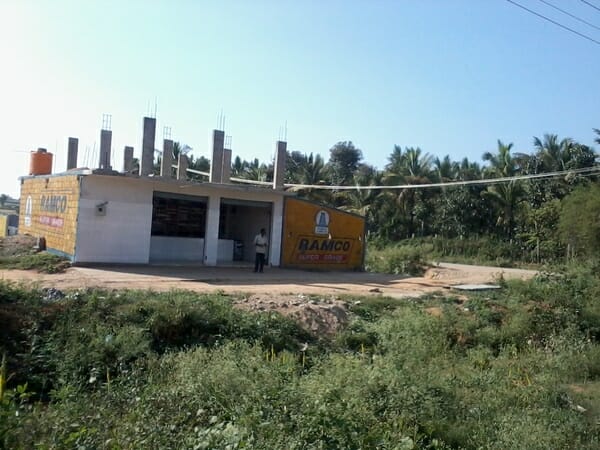 Environs of a building under construction on Sarjapura Atibele road (pic: Moumita B)

This is the ‘growth’ that people who trusted the builders and bought homes here have seen. Lands are lying vacant with no cultivation. I have personally witnessed a farmer right outside my window allowing the crops to spoil.

Connectivity with the rest of the city is poor. Roads are dark without street lights. Cabs and autorickshaws refuse to ply beyond Dommasandra. If they do come, they charge you exorbitantly.

So, I ask these big real estate developers, "Where is the development and easy connectivity that you promised?" No builder has done anything to develop this area.

If they are really concerned about human lives and emotions, it would have helped the Panchayat to install street lights, remove the alcohol outlet that has become a menace to the residents on Sarjapur-Attibele Road, plant more trees, devise ways and means to enhance ground water level, help the poor farmers to sow and return to agriculture and not buy land from them. Developers can do all this and much more. But they lack the sensibilities and the conscience. They do not look back to check how the customers are faring, how the community is coping and how the city is developing.

Don’t these ‘developers’ have a social responsibility? A builder group claims (in one of its hoarding on Sarjapur road) to be the largest owner here. Here is an extract from their  website:

"Sarjapur has one of the finest land banks in Bangalore with abundant ground water. This resource is the highlight of this area, drawing developers and software giants to announce numerous SEZ’s here. Two eminent software giants who are among the top five companies, have already acquired a huge piece of land, considering the future of software parks located here. In fact, every major software or technological company is seriously considering making Sarjapur a prime location, given the success and the future of development centres, and tech parks".

Obtaining water is a problem. In Krystal apartments, groundwater was available only at 1200 feet. Claims regarding connectivity and infrastructure are just plain words to lure gullible customers.

This place is filling up fast. I had raised the matter of safety, installing street lights and speed breakers with the Panchayat Development Officer (PDO), Gangadhar, in September-October last year when I went to get my Khata. And nothing has been done so far.

To handle the water shortage, we are buying tanker water. The builder has not provided a proper water supply facility. Two borewells in our campus have dried up.

Who is there to coerce the errant builders and unresponsive government officers?

About Moumita Bhattacharya 2 Articles
The author has not yet added any personal or biographical info to her or his author profile.
Website

Do you know of any apartment / community in any locality of Bangalore where waste segregation at source is successful? If so, do take part in this survey.

At ward committee meetings, you can discuss any local issue – from potholes to your ward’s annual budget. Know more about how you can make a difference in your locality by taking part in these meetings

VoteDeIndia has been conducting voter registration drives at MNC campuses in Bangalore, most recently at Cognizant and Sasken.