After crowdfunding his Kannada film Lucia’s production by raising Rs.51 lakhs through Facebook fans and others, Pawan Kumar of Lifeu Ishtene fame has finished the production and released the trailer as well as songs.

What about the film’s release? Kumar, 30, launched an even more ambitious crowd fundraising campaign this year. He is now raising money to distribute the film in the mass market – theatres and multiplexes  – and is trying to reach between Rs.50L and several crores.

“We raised Rs.51 lakhs in February 2012 for shooting and production. 70% of the money came in as investment and the rest as ‘pre-order’ ticket sales. Now we have started crowdsourcing again for distribution only. We have been able to finish the film successfully with what we raised for production”, says Kumar.

Kumar is doing this by asking people to pre-order his film for a streaming view online at HomeTalkies.com. He has set pre-order prices from Rs.500 all the way to Rs.5000, with each level coming with it’s own set of benefits thrown in. In return for pre-ordering, he will convert each buyer into an online distributor for the film.

Pre-orderers will receive a unique coded link for the film’s screening when the buyers pay. When the film releases online, in addition to seeing the film themselves, the buyers can circulate this unique link through their own social network. For everyone who buys a screening of the film through such a link, the owner of the link (the person who did the pre-order) gets a percentage as fee for having promoted the sale.

Kumar points out that his approach is not the same as other crowdfunding platforms. “What we are doing with pre-orders as a method to crowdfund is actually better than what western countries are doing. If you look at www.kickstarter.com, which is the most popular crowdfunding site, their website allows people to put in money into projects and in return they get mentions or T-shirts or DVD’s. Nothing more. So it’s more like charity”, says Kumar. 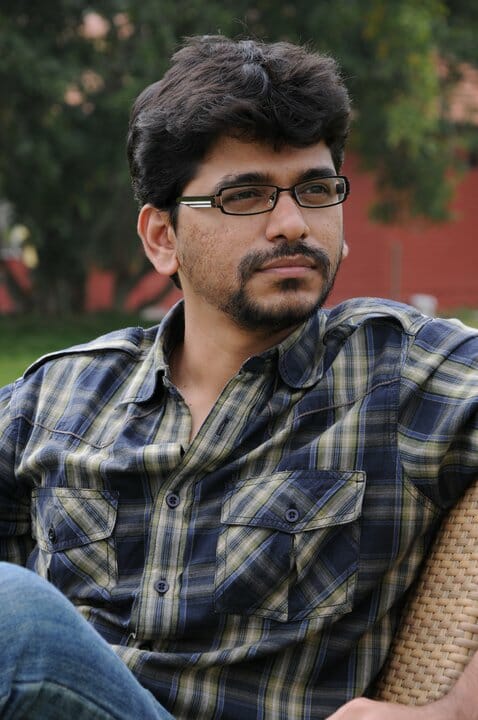 On the other hand, Kumar says that since filmmaking is a business, there is no need for anyone to do any charity. If people are going to crowdfund this project, they should get something in return, he says, laying out his principle.

“Hence we created the tool of online distribution. So anyone who pre-orders Lucia with the intention of crowdfunding will not only get to watch the film and also own some freebies, but will also get the tool to earn the money back. We felt this would be a fair deal”, he says.

Lucia has received 445 pre-orders so far, according to Kumar. “Many are finding it a bit difficult to understand how online distribution works. So every week we are trying our best to communicate the same. This concept being quite ahead of its time, I guess it will take some time for everyone to understand how it works”, is what Kumar offers by way of assessment right now.

For more on how pre-ordering works, see HomeTalkies’ explanation at http://www.hometalkies.com/how-it-works/.

The story of Lucia is a fascinating one in its own right. It began with Kumar’s frustration in early 2012 that no one in the Kannada film industry would fund his script, even though he had shown that he was a successful film director.

“I haven’t found a single ‘adjective’ star to give me 3 hours of his time to hear the script out! And all of them are now announcing their new ‘remake’ films. I would not have reacted this way if they had heard the story and then rejected it. It feels bad because no one even wants to hear it out, they simply want to pick up remakes!” wrote Kumar in an article in Citizen Matters that followed  post on his blog.

“An original film writer in Kannada hardly gets paid! Sometimes if he is lucky, he can make up to a lakh or a little above that. That’s how much a Kannada producer thinks a script writer deserves. However, the same producer pays up to 10-15 lakh (sometimes a lot more) to buy the remake rights of a film from another language”, he wrote.

Knowing that he was taking on the top guns in Kannada filmdom, Kumar pointed out how things were working and that he stood for change. “In other language industries, a writer is funded even before he starts writing. Here our (Kannada) producers think that writing doesn’t require any money. Remember it’s the same producers who pay through their nose to buy the content written in another language”, he said boldly.

The rest followed from there. His fans reacted to his appeal and invested in Lucia. He finished the film and released the trailer earlier this year.

Citizen Matters has signed on as online media partner to promote Lucia pre-orders with the release of this article. You can pre-order the film through the Lucia player box in Citizen Matters just as you can do on Hometalkies.com directly. For more on how pre-ordering works, see HomeTalkies explanation at http://www.hometalkies.com/how-it-works/⊕

Commercial Street mishap: Why crores were lost for a Smart City project

Under the Smart Cities Mission, Commercial Street was redeveloped by following TenderSURE guidelines. Why then did the road get damaged so quickly?

Voice of India exhibition- the world of haunting melodies

Voice of India exhibition at the Alliance Francaise transports the visitors to the world of haunting melodies and voices from the past, and presents a chance to revel in nostalgia.

Electricity tariff hiked, work on the Vellara Junction-Pottery Town Metro line starts, traffic police gets prepared to tackle eventualities during monsoon – read more on what happened in Bengaluru this week