Amarjyothi layout, Domlur is supposed to be a very posh locality situated in one of the most busy parts of Bengaluru. There are over 500 sites spread almost equally on either side of the intermediate Ring Road from Indira Nagar to Koramangala south of the old Airport Road. Both the east and west wings of the layout are also neighbouring some of the most sought after landmarks in Bangalore. The east wing is surrounded by the Karnataka Golf Association (KGA) and Royal Orchid hotel on one side and the Embassy Golf Links Business Park that houses some of the world’s largest information technology (IT) companies. The western wing is also host to many smaller IT firms, hotels, automobile service centres, consumer retail outlets, resorts and various other commercial establishments. There are nearly 400 buildings in the layout with about 2000 residents.

This layout came under the ambit of the BBMP about seven years ago. However, the citizens of this layout continue to wait for basic amenities like water, drainage and asphalted roads. In fact, they have been denied these entitlements ever since the layout was handed over the to BDA over 15 years ago. One can find open drains and sewage lines still in action in this layout. To make matters worse, some of the IT companies also keep discharging their effluents into the open sewage line that has become a breeding ground for mosquitoes. Last year alone, over 22 cases of Dengue fever were reported in the east wing of the layout.

The residents’ unending quest for basic amenities is complicated by the fact that Geetha Sreenivasa Reddy, the BBMP Councillor (or Corporator) for this layout and the MLA N. A. Haris for this constituency (Shanti Nagar) are from rival political parties.

As is it happens in some cases where the Corporator is a lady, the husband (Sreenivasa Reddy in this case) is the de facto holder of the post. Due to the rivalry between the MLA and Corporator, the MLA had stopped visiting the layout and did not even know the problems faced by the citizens since many years.

However, to the Corporator’s credit, as soon as she got elected two years ago, a few good things happened in the east wing. A park adjoining the golf course came up at the south end. A long pending underground drainage (UGD) system was constructed and street lights were also put up. The Corporator took due credit for these nice little things through the photographs taken during their inauguration and Bhoomi Puja that got flashed across local newspapers. It would be wiser not to raise questions regarding the quality of the UGD work or the maintenance of the park. The bore well set up for watering of the plants has completely dried up and the motor is not working. When queried more, the contractor says that the BBMP has not given any money for the maintenance and they have not been paid even for the work done two years ago to set up the park! There are no lights in the park and all plants have started withering. 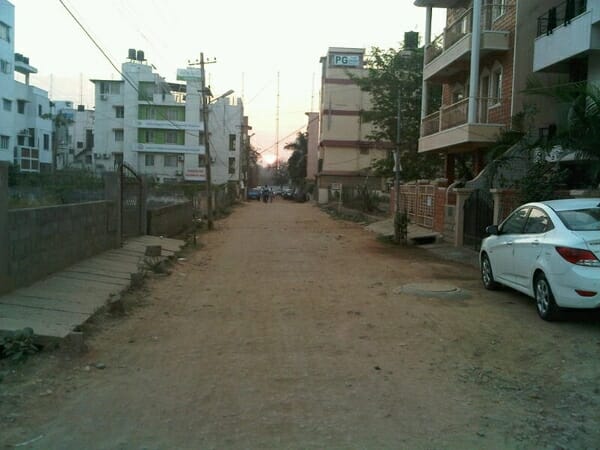 Sample this for a picture of the condition of roads and drains in this otherwise posh locality. A recent incident confirms that political differences and clash of egos come in the way of providing even basic amenities in this layout.

Amarjyothi Residents Welfare Association (ARWA) is a registered association representing the owners of sites in this layout. Many times it has faced the dilemma of whether to approach the Corporator or MLA for seeking help to get basic amenities.

In June 2012, the BBMP asphalted two roads in the layout leading to the Royal Orchid hotel and the KGA, leaving the remaining ones. On the day of the Bhumi Puja for carrying out this work, the Corporator called one of the office-bearers of ARWA asking him to bring residents in the layout to block the work. Apparently, all she wanted was that the BBMP officials invite her for the puja and click a few photographs to enable her take the credit for the roads. Within a few hours the Corporator called the same office-bearer of ARWA asking him not to block the work. When he asked about the remaining main roads and cross roads she answered that the BBMP has apparently lost a file concerning the layout and therefore the asphalting of the other roads will take some more time.

The corporator advised the ARWA to approach the BBMP through her. The ARWA launched a signature campaign from all residents with a request to the BBMP Commissioner for asphalting of the remaining roads, immediately. The letter also reminded the BBMP that the much awaited UGD work which was the only impediment to asphalting, was completed. A copy of this letter was also handed over to the Corporator who promised to take up the matter on priority. During follow ups, she said that the work would begin within a few weeks from then.

But nothing happened even after three months. At one point of time, the Corporator expressed her inability to get the job done by BBMP as that her voice was not being heard.

Another six months passed. When an elderly couple from the east wing had met the local MLA regarding an issue related to their ration card, they mentioned the infrastructure problems, by chance. The MLA, during the course of conversation, accepted an invitation to visit the layout and see the lack of basic amenities, and in particular, the roads. Thus, towards the end of February 2013, when he visited the layout, many residents voiced their concerns reiterating the basic challenges and requested his help to remedy the situation.

At the time of the MLA’s visit to the layout, the elections for the Karnataka legislative assembly had not been announced and there were no restrictions imposed by the election code of conduct. Within another week, the MLA visited the layout again along with all the officials concerned in the BBMP, BESCOM, BWSSB and other departments. He instructed them to solve the problems expressed by the residents, giving high priority to asphalting of roads. Much to the delight of the residents of the east wing, a bhoomi pooja was performed on 17th March 2013 by the officials in the presence of the MLA and the roaring sound of a JCB machine was heard on Monday the 18th March 2013.

Within a few minutes of the machine commencing work, a group of men on motorbikes appeared suddenly and ordered the contractor to stop the work. These men turned out to be those sent out by the ‘de facto’ Corporator (the husband of the actual Corporator). When a resident called Srinivas Reddy to know why the work was stopped, he said that the contractor did not have a proper work order issued by the BBMP and that it was illegal to start the work. He also claimed to be the elected leader of the people and abused the MLA for having visited the layout without his knowledge. The ‘de facto’ Corporator accused the MLA of misleading citizens as he was aware that a work order cannot be issued without a tacit approval from the corporator.

The author of this article had a lengthy debate lasting over two hours with Srinivas Reddy, when the latter visited the layout late in the night on 18th March 2013 after the work was stopped. When asked why he was stalling the provision of basic amenities that residents of Amarjyothi Layout have been deprived of for many years, he said that he had already done enough for them and that there was no limit to the desires of people. He had no answer when questioned if it was a crime for people to demand what they rightfully deserve. 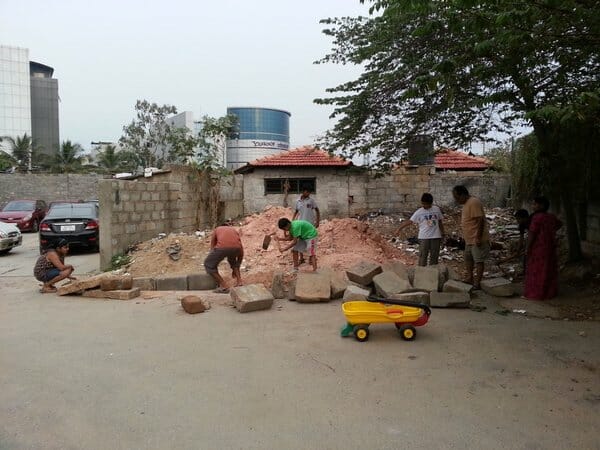 ARWA recently requested the Corporator to set up monthly reviews involving residents and officials from BBMP / BWSSB / BESCOM / other civic bodies. Due to the upcoming assembly elections, the Corporator requested for some more time.

The RWA has also been making efforts to alleivate the exisitng challenges, such as open drains and parking problems. The MLA’s visit could not solve much of the problems. The Corporator has also expressed her inability to do anything about it.

Well, the wait for the roads continues and the work is under suspension at the time of writing this article. Meanwhile, the average citizen will continue to live with the expectation that the forthcoming assembly elections will see some light at the end of the tunnel. But it is certain that the commoner will be left at the mercy of persons for whom nothing matters more than their own progress and rivalry with their counterparts in politics

About Seshadri Srinivasan 1 Article
The author has not yet added any personal or biographical info to her or his author profile.

In 2014, High Court directed the govt to allot them flats in Sulikunte, and to set up schools, hospitals and increase frequency of buses from the village. None of this has happened.

The extent of the price rise of just about every essential commodity is hurting most the urban poor whose source of income is limited and insecure.