About 38 years ago, way back in 1974, there was no “no water day” for Bangalore houses. Corporation water was released to houses every day. “Water timings” was also unheard of. Corporation water flowed in the taps through the day, so much so that many houses had taps connected to an overhead water storage tank only as a back-up. And water used to fill up in the overhead tank on its own, because the pressure of the water in the pipes was sufficient to help the water “reach its own level”. This was the time when Bangalore city had just started receiving Cauvery water. 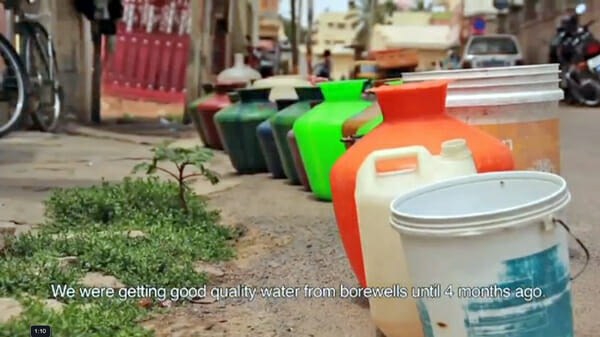 This was also the time when Bangalore was free of tall multi-storied apartments, and people lived in independent houses, large or small. Bangalore was free of air-conditioned malls and multiplexes, but shopping and entertainment options were still plentiful. Bangalore was free of its Information Technology tag, but was still a reasonably significant industrial manufacturing hub. With its tree-lined roads, large open spaces and now abundant Cauvery water, Bangalore was really the Pensioner’s Paradise, where retired folks could live without any worries.

Cauvery Water in Bangalore was the first big step taken by the State Government to meet the growing water needs of the city, something that was anticipated several years earlier, after many of the lakes that were sources of drinking water, had been “developed” to accommodate infrastructure projects.

In 1958, an Expert Committee had been formed to investigate the problems and suggest measures that would meet the long-term water needs of the city. At that time, the Expert Committee considered four possible options: development of the Arkavathi River downstream of TG Halli reservoir, Hemavathy River, Shimsha River and Cauvery River. They recommended going with the Cauvery. At an estimated cost of Rs 22 crores, the Cauvery Stage I Project commenced in 1969 and took about five years to complete. On 24th January 1974, Bangalore received its first taste of the Cauvery water.

Subsequently, with the ever growing needs of the city, Cauvery Stages II, III and now IV have been implemented by various state governments but there seems to be no end in sight. The cities boundaries have been stretched on all sides, and with it, the water problem has reached the stage of a crisis.

Bringing Cauvery water to Bangalore over 100 km is expensive. According to Kemaramayya, BWSSB Engineer, Cauvery water is pumped to Bangalore in three stages of 500 feet each, with associated costs of pumping 900 MLD for a month (as of 2012) being Rs 300 crore. Cauvery water does not reach much of the city, and for those who do receive it, rationing to a couple of days in a week is now a way of life. Wells and borewells are going dry and dependence on water brought in tankers from far-away places is quite prevalent.

Towards a permanent solution to Bangalore’s water problems an expert committee was established in 2012 headed by Tyagarajan. Several proposals have been placed before the committee for consideration, including a comprehensive solution by Citizens Action Forum (CAF), that will help in augmenting the city’s water resources.

N S Mukunda of CAF says that its proposal is based on the idea that access to drinking water is not only a necessity but the right of every citizen that cannot be denied by any municipality or government. CAF’s proposal is backed by a documentary that it produced itself. It has shown with facts and figures that even in 2051 when the population of Bangalore is expected to reach 22 million the city can have 24/7 water supply with a surplus of 1000MLD, with minimal dependence on Cauvery water.

CAF representatives have presented their proposal to all the concerned authorities including the Minister in charge, the Expert Committee appointed by the Government of Karnataka, the present and past Chairman of BWSSB and the Lok Adalat judge Justice Patil. None of the facts and figures have been challenged and they have agreed that it is an implementable proposal.

1. Revive Arkavathi River and Hesarghatta Lake – The old source from Arkavathi-Hesarghatta which was supplying 165 MLD has to be revived. There are quite a few plans prepared by experts on its revival. One appropriate plan has to be implemented by an autonomous body with the right amount of funding. This revival can be achieved in 5 years and results will start from the third year onwards.

2. Revive, rejuvenate and interconnect all the existing 184 lakes – Conservation of the 184 lakes and the interconnection of these lakes are issues of urgent attention. The rejuvenated lakes will improve the ground water level in Bangalore and the borewells in the range of 80 to 180 feet that have gone dry will spring to life. This measure will ensure a supply of 500 MLD per day to the city.

Since the earlier system of Rajakaluves are effectively destroyed, occupied and built upon we can use the existing SWD network to interconnect the lakes. The one thing we have to determine is to trace the path of this SWD between two successive lakes, identify the missing stretch and complete the missing link thereby effectively establishing the interconnection. In this interconnecting stretch stringent measures have to be adopted to block all illegal sewage flow so that there is no chance of sewage entering the lake.

For this to be successful, authority of lakes needs to be vested with a single body (unlike the present situation where the government has divided the authority of lakes between different depts. Like the BDA, BBMP, LDA and the Forest Dept and is tackling each lake as a stand-alone. The authority to a single department will help revival of lakes within five years.

3. City wide rain water harvesting – Rain water harvesting is now mandated for 40×60 sites and all new residential constructions. Considering the 56000 40×60 sites, at 750 mm of rain, with 100% collection will give 9072 MLD annually. Daily requirement is 1450 MLD. So it meets the requirement for just 6.25 days or 1.71% of annual requirement. So RWH should be done in all public (government buildings and 1400 parks in Bangalore.

When spoken to by CAF, B N Vijay Kumar, MLA Jayanagar said, “There is definitely a water problem in Bangalore today. The inclusion of outer Bangalore within the BBMP limit has intensified the problems. If someone works on the issue at least 50-60% of Bangalore’s water problems will be resolved.”

According to N S Mukunda, “The way ahead is for us to create awareness of these issues among the people and start a people’s movement to pressurise the powers that be.”⊕

It looks that our BBMP act only after being pulled up by the High Court Appointment of Ward Committees, Garbage Segregation at Source, Scrapping of Signal free corridor from Koramangala to Sirsi Circle, not allowing

A lake frothing with snow, traffic ‘jams’ whose taste never leaves, a pharmacy every 100 m, 80% of pedestrians wearing masks, more advertisements per sq ft of building surface… here’s a list of all the records set by Whitefield in just a few years.