“Don’t worry for water, Bangalore,” – a fortnight ago a news report ascribed the above assurance from the BWSSB and the Government. Nothing can be further from truth. Bangalore is facing a water calamity. The facts are given below.

GAP BETWEEN DEMAND AND SUPPLY WILL ONLY INCREASE

At the historical 4% population growth rate of Bangalore over the past fifty years, the population of Bangalore living in the 772 sq. km. of area under the present BBMP will increase from 85 lakhs in 2011 to one crore by 2016. With Hessarghatta gone and Tippegondahanally drying up, the only reliable water supply to Bangalore is from Cauvery with a gross of 1,410 MLD. 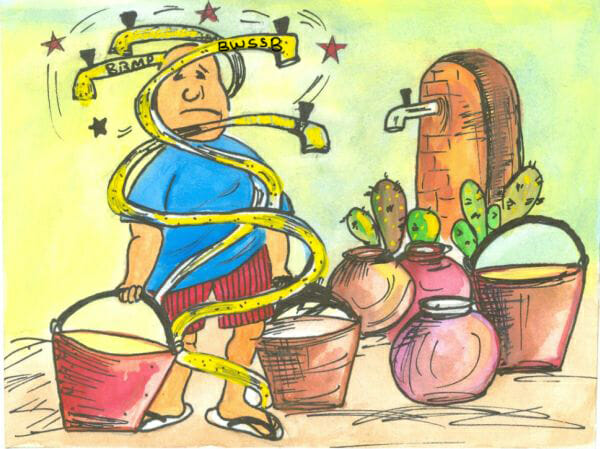 There is no way of increasing drawal from Cauvery as the allocation by the Cauvery Water Disputes Tribunal for the entire urban and rural population in Cauvery Basin in Karnataka is only 8.75 TMC. As one TMC (thousand million cubic feet) equals an annual supply of 78 ML per day, Bangalore city is already drawing more water, 1,400 MLD equals 18 TMC, than the allocation for the entire rural and urban population in Cauvery basin.

Bengaluru is not learning from the Fatehpur Sikhri disaster

Besides, Bangalore city falls under two basins, Cauvery and Pennaiyar basins. Only the Cauvery basin area can receive Cauvery Water and half of Bangalore is outside it. The schemes which the Government proposes – namely, diversion of water from West flowing rivers such as Kanganahole, Kakkatuhole and Ethinahole, bringing water from Almatti dam etc. – are flights of fantasy and can only result in contractors’ and their patrons’ dream projects and environmentalists’ nightmare.

About 43% of the water supplied by BWSSB is Non-Revenue Water or Unaccounted For Water (UfW) of which an estimated 35% is simply leakage from supply pipes. It costs Rs.300 crores annually in electricity charges to BWSSB currently to pump water from Cauvery. Therefore it spends Rs.100 crores annually to let water underground leading to the unintended consequence of increasing the dwindling water table!

Plugging this leakage alone through schemes such as the “24/7 Supply” in Hubli-Dharwad, Gulbarga and Belgaum will save about two-thirds (25%) of the leakage, equivalent to 125 MLD. At present, with nearly 500 MLD of leakage and another 150 MLD going to industries, the balance of 750 MLD for a population of one crore works out to 75 litres per capita per day while the Government of India norm for metropolitan cities is 150 Litre per Consumer per day. With Bangalore’s population going up every year, the gap between supply and demand will only widen with supply from Cauvery having reached the ceiling.

There are about 312,000 borewells in Bangalore which draw about 300 MLD. The drawal of underground water is 3.7 times more than the recharge from 900mm, Bangalore’s annual rainfall. This is the reason why the borewells have gone deeper upto 1,000 feet and many are becoming totally dry.

Moreover, the 600 lakes of Bangalore Urban district have all become Sewage Tanks as shown in Volume 2 of Excreta Matters by Centre for Science & Environment, Delhi, 2011 – a study of 71 cities in India. The sewage water contaminates the ground water and percolates into the borewells.

According to the laboratory results of the Public Health Institute and the Department of Mines & Geology, GoK, 52% of the borewell water and 59% of tap-water in Bangalore is not potable and contain 8.4% and 19% Eschericha coli bacteria respectively. When it gets infected, E.coli becomes a dire health hazard.

The problem of diseases from public and borewell drinking water in Bangalore is seldom highlighted. 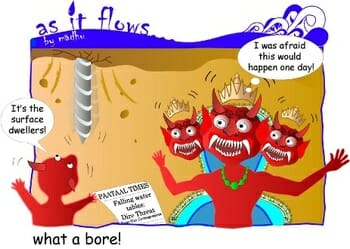 A CITY DIES WHEN ITS LAKES DIE

Of the original 927 lakes in Bangalore Urban District (according to the Revenue Records), less than 200 are said to be “live” lakes. Many of them have been breached and converted into layouts, bus-stations, golf clubs, stadiums, colleges, government offices, etc.

The “live” lakes that exist still are only storing the city’s sewage. The 850 kms of old ‘Raja-Kaluves’ meant as Storm Water Drains to carry surplus water from higher elevation lakes to lower levels in a cascading system of natural rain water harvesting, now carry the city’s sewage instead to these lakes.

The existing 14 secondary treatment plants, 4 tertiary treatment plants and 10 more STPs under construction will together have a capacity to treat 1,133 MLD. However, the existing STPs hardly treat 30% of the sewage because of the latter not flowing into the STPs (but into the lakes) and due to poor maintenance by contractors to save on electricity and lack of supervision.

If the STPs with huge investments already made are effectively used to treat the sewage and more are converted to TTPs, the recovered water can be re-used at least for non-potable purposes to start with. Unless the sewage is diverted and the Raja Kaluves are cleared of encroachments to carry surplus rainwater to the succession of lakes, all the water bodies in Bangalore will become sewage cess-pools causing immense health hazard.

Restoration of lakes done by BBMP with “soup-bowl” technology, decorative bird-islands, paved jogging paths and Chain Link Fences without attending to the primary task of diversion of sewage away from the lakes, helps only the contractors and their patrons. 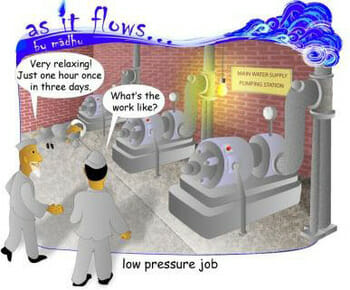 RAINWATER HARVESTING, A JOKE IN BANGALORE

Rainwater harvesting that presently covers only 44,000 houses out of some 18 lakh properties has no meaning. As only 40% of the area of Bangalore is covered by roofs, for rainwater harvesting to be effective, it should be done on a geographical basis covering the entire four basins of Bangalore as done in Singapore, a city that works. What is done in Bangalore now can only be termed sloganeering.

Obviously these problems are gigantic but must be solved in an integrated and comprehensive manner if Bangalore has to survive. What the BWSSB is doing is tokenism, piece-meal, ad-hoc and on “pilot” basis. A comprehensive plan including all the above components with genuine restoration of lakes, leakage plugging, effective STPs and TTPs, Rainwater Harvesting and involving civil society organizations can alone solve the crisis facing Bangalore. It also requires a sizeable investment.

As part of an initiative by Bangalore Environment Trust and the Centre for Policies and Practice, we had requested a consultant to suggest an outline for a comprehensive plan. Their recommendation is shown below:

Such a comprehensive project will take about 10 years and can be funded only with external assistance from international funding bodies such as the World Bank, Asian Development Bank and Japan Bank for International Cooperation which impose financial discipline while awarding contracts and certifying quality of work.

Obviously, the BWSSB is not keen on such an integrated project which requires strict financial supervision by the funding body. The truth is, in such big projects with World Bank-ADB funding, the unholy alliance of Ministers, officers and contractors cannot siphon funds. But in the absence of preparations and implementation of such an integrated and comprehensive programme, any attempt to solve one component here and another there on a much-popular “pilot basis” is only a futile exercise in tokenism; it will not be of any use and can only be a waste of public funds. It is more like a “Tirupathi Kshavara”.

The Government must take responsibility for the survival of Bangalore. Otherwise, we will be overtaken by a ‘Black Swan’ event that would necessitate evacuation of half of the city in ten years due to water scarcity, contaminated water and resulting disease. It has happened in history before, such as in the abandoning of Fatehpur Sikhri, fading out of Adil Shahi’s Bijapur, etc. History repeats itself as tragedy unless people wake up.

An illustrative list of lakes that have lost their characteristics entirely

Record sighting of the Demoiselle Crane in Bengaluru

Valmiki apparently wrote the first verse of the Ramayana after he saw a hunter kill the male of a pair of courting Demoiselle Cranes. Deepa Mohan documents the very first sighting of the bird in Bengaluru.

Kathri. Scissors. That was the connection that first brought this man into my life. In my salad days, learning to ride a bicycle was not quite what it is today. One did not have access

I am a voter and I feel like Lord Shiva

This election, we are faced with the question of whether we are choosing our MP or the future Prime Minister. As parties get away with fielding inexperienced candidates in this scenario, we ourselves have to force them to field better candidates, opines a voter