For Sukumaran Menon K, the outcome of a two-year-long protest against injustice is more trouble and misery. Sukumaran hails from a small town called Triprayar located in Trissur, Kerala. He came to Bangalore 49 years ago to join Bharat Earth Movers Limited (BEML). Now, seven years after his retirement, Menon is on the footpath asking for justice. He sits on fast on a stone bench on M G Road near the statue of Mahatma Gandhi from 8 am to 6 pm, holding his faded umbrella under the scorching sun. Menon’s Samadhana Satyagraha started on March 21, 2011. No government official has ever met him. 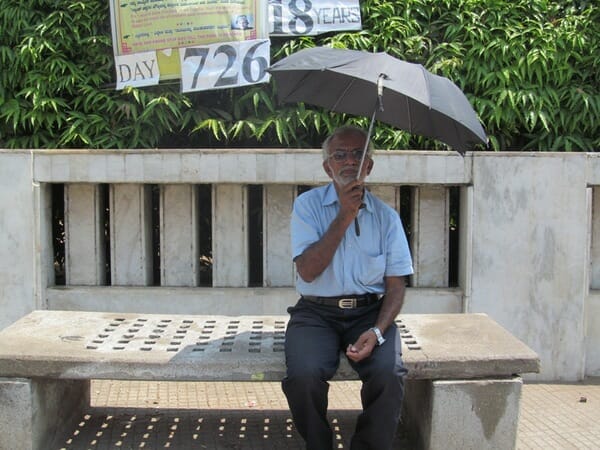 Sukumaran Menon on day 726 of his fast (pic: Deepu A Varghese)

Menon worked in BEML for 42 years. He recalls those days as a period of struggle. Along with his wife, Menon ran a dairy farm after his working hours, to make ends meet. Spending the prime time of his life working strenuously, he managed to buy 1.75 acres of land beside Hosur Road in 1992 and constructed a house there. But Menon and his family could not live under their own roof for long. In 2008, the Bangalore Development Authority (BDA) stepped into their lives claiming possession of the plot as it is situated adjacent to the NICE road. After months of tussle between the government and Menon, he and his family were forcefully pushed out of their home and the building was demolished by the BDA.

Although Menon had been notified six months prior to the date, his house in the plot was demolished. No compensation has been allotted to him till date. The elderly mani identifies the issue as a scam. He names all political kingpins in relation to the dispute and says that he is a victim of thoughtless brutality and corruption. Menon alleges that even the judiciary has been bribed and his cause remains unrecognized by related authorities. At present, he and his family live in a rented house very near to the disputed land, at 11th cross, Hosur Road. Menon remarked, "I stay near my grabbed land so that I can see what is happening to my land."

Legal action
Sukumaran Menon is contesting two civil cases in the Supreme Court of India against the Government of Karnataka in the hope of winning back his hard earned asset. The cases are still sub-judice. "I do not have any faith in the judiciary. Officials have been bribed. The Nandi Infrastructure Corridor Enterprises Ltd. and Karnataka Industrial Development Board are the culprits", says Menon. Under the RTI Act, he acquired information from the town planning commissioner in 2011 related to the distribution of land for the development of the road. This disclosed the original map of the area which clearly indicates that his disputed plot was never a part of the NICE project.

Nevertheless, according to Menon, the judiciary seems to be blinded by money. His struggle for justice still continues on the side of M G road. Aged 62, he suffers from geriatric health problems. Passers-by seldom notice the man. Menon shared, "Hardly any media person has ever showed up during the days of protest". The police frequently asks him to vacate the stone bench, but Menon has never shaken his decision to stay back. He does not have hopes of getting back his asset, but he is determined to set an example for the callous society.

About Deepu Aby Varghese 1 Article
The author has not yet added any personal or biographical info to her or his author profile.

Puzzled about how to pay property tax? Here’s how you can do it without much hassle!

Hundreds of college students risk their lives everyday walking on the busy ORR in Nagarbhavi, thanks to broken footpaths.