"Put yourself in your teenager’s shoes," the firm voice told an expanse of riveted ears, "but first remember to remove your own". Such were some of the profundities shared by Dr. Ali Khwaja, during his talk on raising teenagers earlier in March at the Parish Hall of Ascension Church in Bangalore’s Cooke Town. 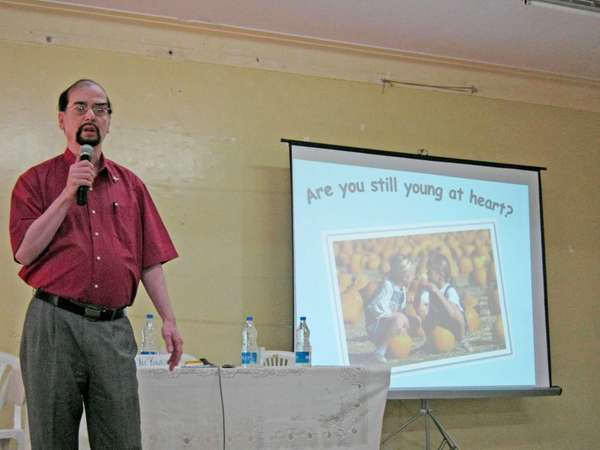 aaaA Heart for the Youth: Dr. Khwaja elaborates his serious points in a most engaging way – with jokes, anecdotes and voice role-play. Pic: Jatin Prabhu

Khwaja is a professional diploma-holder in Behavioural Sciences, and founder of Bangalore’s Banjara Academy on interpersonal skills; his credible musings on parenthood’s most turbulent years attracted concerned parents as well as observers on this occasion. The voluminous crowd in attendance at the Parish Hall of Ascension Church in Bangalore’s Cooke Town indicated the widespread concern over the subject, as well as the respect that the speaker, as a professional, commands.

In his speech, Khwaja pointed to his own experience as a father who has successfully raised his progeny to adulthood. "My two children got through their teens without landing in a mental asylum or in prison," quipped the gentleman. "Today, they are not fabulously wealthy or successful. But they are happy, stable people."

However, this desired result, was the fruit of several years of demonstrating patient, sincere empathy. "Just as our host requested you to switch off your cell phones, I urge you parents to switch off the former teenager in you!" suggested the expert, adding that "too many parents begin correcting their children with the phrase, "When I was your age…"

Khwaja proceeded to point out that the social milieu of a child today is radically different from the one their parents lived in. As just one example, he contrasted the phenomenon of large families in previous generations to today’s one-child nuclear families.

"As a 7-year-old, if I got a chocolate, I would hide it from my brother. But he was sure to find it. Then on realising he had eaten it, we would fight. But since I had no other options to keep me entertained, I would say to him, ‘I am still angry with you, but come play with me.’" Dr. Khwaja used this simple anecdote to demonstrate how such an interaction could equip one at a very early age to communicate effectively, forgo losses and compromise, as well as, to negotiate and remain happy.

Smiles all around: Dr. Khwaja leaves the audience enthralled with his advice on how parents can turn into their teenager’s friends. pic: Jatin Prabhu

"Most children today, don’t enjoy the luxury of siblings. So parents have to fulfill the role." Here is where Dr. Khwaja raised eyebrows significantly. Through engaging role-play and in anecdotal style, he elucidated a startling trajectory in a child’s behavior. If a parent doesn’t show enthusiasm in listening and responding to a small child’s observations while he’s growing up, that child will ultimately stop sharing any of his thoughts, feelings or experiences with his parents.

Teenagers whose childhood tales were shushed by the parents, will then become mono-toned, leading to this scenario:

"How was college today?"
"Fine"
What did you do?
"Nothing"
Where are you going now?
"Nowhere!"

Communication is a way in which parents can also give their teenage children something to emulate. "An empathetic parent becomes the teenager’s role-model," Khwaja added, even suggesting that parental role-modeling is especially important as there are no real role-models left in today’s world. 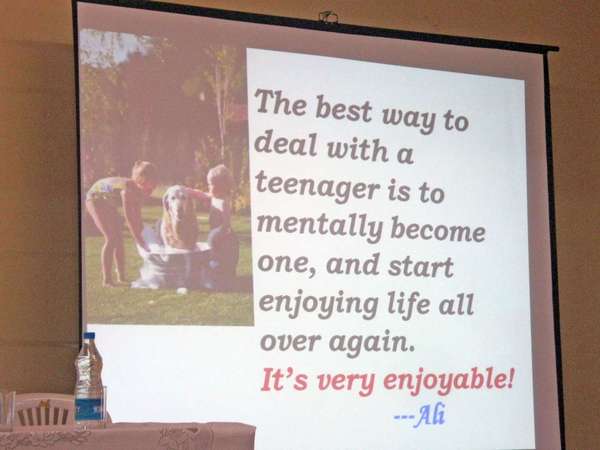 Young at heart: A startlingly simple but potent piece of advice from the speaker. Pic: Jatin Prabhu

"These days youngsters will only look up to cricketers, film-stars or business icons, and that’s mainly because of the amount of money they are earning, or their star-status, but not because of what they have achieved." Khwaja even hinted that a decline in religious sensibilities might be to blame, "Previously, more people looked at Jesus as their savior, and someone who served as a role-model to help one do good, to be kind to people, etc."

The doctor wrapped up his talk with advice around relatable scenarios of dealing with teenagers. Standing out among his nuggets were:

"Many financially successful adults still have low self-esteem and that comes from faulty upbringing. Nurture self-esteem by appreciating any creativity that your child shows!"

"Make your teenager want to talk to you about any subject under the sun, and then he won’t have anything to hide from you."

"Make punishment constructive and explain the reason for it."

The speaker was greeted by a volley of questions as he ended his talk. "How does a teenager deal with bullies?" was one query, to which the speaker promptly replied. "Empower your child to handle a situation himself. As far as possible don’t intervene yourself. And show him that he needn’t prolong such ugly confrontations. Diplomacy and pacifying words can also prevent violence."

Another question went thus: "If today’s small families lack siblings, how can the parent keep fulfilling the role of a brother or sister?" In response, Khwaja recommended sending teenagers to summer camps or getting them involved in a wide variety of engaging activity. A satisfied and encouraged audience applauded, and rose from their seats in appreciation. As they made their way home, perhaps Dr. Ali Khwaja’s final directions were still ringing in their ears, "While a teenager grows, his parents should grow with him."⊕

About A Gracias 12 Articles
The author has not yet added any personal or biographical info to her or his author profile.

Sridhar decorates the deites for occasions such as Narasimha Jayanthi, Gokulastami, Shravana Shanivara and other festivals.