Electronics City on the fringes of Bangalore may be better known as the Silicon Valley of India – home to the likes of Infosys and Wipro – but what fewer people recognise is that it is also a shining example of growth that brought inclusive development in its wake.

Governments of the world, NGOs, economists, civil society, school-children, college-professors, and the UNO are all busy trying to figure out a way in which development can take place without marginalizing certain sections of the populace. They’ve all tried to solve the pertinent puzzle of how we can acquire land for development, and provide fair compensation for those whose homes we take away? How do we ensure that everybody enjoys the fruits of development without an inordinate sacrifice made by a few in order to enrich others? Inclusiveness continues to elude. 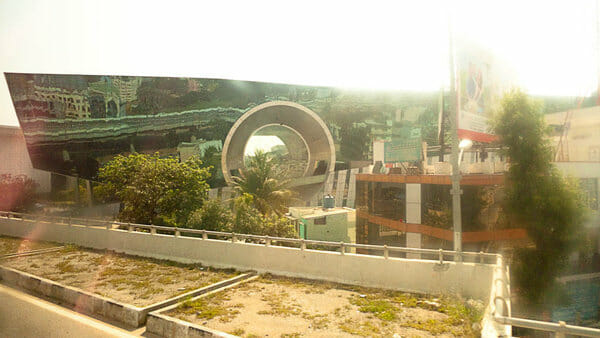 The pattern in which Keonics Electronics City has developed in Bangalore is a beautiful solution to this problem that the world seems to be grappling with. The conventionally accepted indicators of development such as per capita income and gross domestic product have continuously been on the rise since the City came up. A working paper by M.R. Narayana by the World Institute Development Economics Research, titled ICT Sector, Globalisation and Urban Economic Growth- Evidences from Bangalore, shows that the annual per capita income has increased from Rs. 7,472 in 1980-81 to Rs. 14,127 in 1993-94, Rs. 22,970 in 1999-2000 and to Rs. 36,592 in 2004-05.

There is wide agreement on the fact that this is a result of the rapid increase in the close concentration of incentivized ICT industries (Information and Communication Technologies) in this area. To set up this melting-pot of ideas, the government had to provide a lot of land in 1985. A pocket of an already over-crowded India was given to R. K. Baliga, the first Chairman and Managing Director of Keonics to set up Electronics City.

Development activists would immediately ask, whose homes did they trade for this flourishing IT Parkland? Did they destroy a freshly developing urban life at the heart of the city? Or did they take away large tracts of agricultural land that belonged to poor farmers? Or worse still, did the land belong to some tribe that really can’t complain in our language?

Refreshingly, they did none of this. The acquisition of the 330 acres of land required for the project seems to be the best illustration of an effective exercise in urban zoning. Land was acquired in belts. Fallow, forest land, in between rice farms were acquired, leaving the farms and homes of most of the local population untouched.

Initial acquisition undertaken by the government was that of the least populated regions in the semi-agricultural area between the three cities, with the payment of large and unexpected sums of money, explains 67 year old Meera Neelam, whose family had been living in the Agrahara region. She confirms that not too many people minded, though there were obvious hassles with moving home. However, since there was a lot of spare land available, and the money which came in was good, they moved to nearby areas which had not been acquisitioned by the government. 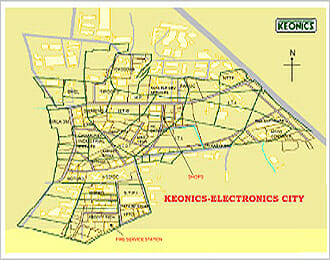 Both Meera and Syed Nemrans, owner of a travel agency near the Infosys Park, confirm that the government took care to acquire regions where there human settlements were considerably less. "It was mainly the empty, rocky spaces of wasteland that were acquired, leaving behind pockets of town life undisturbed," says the latter.

As the IT industries developed swiftly in the cluster model, they generated employment. Skilled professionals migrated from all parts of the country, at salaries much larger than they could have earned in their hometowns. And as employees came in, they generated a demand for residence and daily needs. To respond to the daily needs of people, people from all over the country came in to supply what was needed. Thus, grocers, tailors, mechanics, travel-agents, security guards, domestic servants, crèche workers, cooks, waiters, washer-people, descended into the Electronics City from all parts of the country, and set up shop in un-acquired urban streets.

Diptibant Behera a security guard at Seimens, who originally hails from Orissa, and has been living on rent with his wife and son in the Hubbaguddi area of EC for the past 5 years, says that around 70% of the people who live at EC (excluding the ICT professionals) are from different parts of the country; they have come here to earn incomes and make money, much more than what they could’ve made back home.

The growth of the IT industry here has resulted in a number of medium range schools and hospitals being developed in this part of the city, and thus, these migrants, who come from all over the country, now have access not only to higher incomes, but can afford the unthinkable luxury of sending their children to school, and getting proper medical care for health problems. "Almost all children here go to school", says Jagadesh Mandya, a waiter at one of the Cafe Coffee Day outlets that have sprung up in the area. Jagadesh has been living here for the last 6 six years, before which he was in Andhra Pradesh.

Krishna Gowda, another security personnel voices similar feelings. The school his two children study in teaches them a lot more than the ones in his native village did, he says. Krishna now wants them to study Engineering when they grow up. 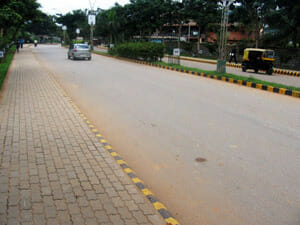 On a couple of trips to the Electronics City during my research, I was a little disgruntled by the fact that there seemed to be nobody who lived in this area from before the IT parks developed, with whom I could speak in the shops and bus-stands. I walked around asking people where their families came from, and their responses scared me. I found myself praying that the new Land Acquisition (Resettlement and Rehabilitation) Bill was passed really quickly in parliament.

"Where were the people to whom these lands belonged? You know, the ones who lived in these three villages before?" I found myself asking everyone I met.

The first person to throw some light on this issue was Ramesh Gupta, an old grocer then. Gently, and in detail, he explains to me the population dynamics of the region. 85% of the original inhabitants of the three villages – Konappana, Agrahara and Doddathogur – where Electronics City is now located, owned lands though the holdings may have, through the generations, disintegrated into small-sized parcels. Since the area was unproductive, these land-owners have given up their lands, in between the industrial clusters, to realtors to develop apartment buildings in.

Construction contractor Hanumanthappa further shares that usual contracts have an arrangement in which 40% of the rent earned from these apartments is paid to the original land owners. Even the tiniest plot of land has about 8 apartments in them. One of these is given to the family who owned the land, and the rest is rented out, mostly to young IT professionals.

Further investigations, phone-calls, and calculations help me figure out that a family owning even the smallest of holdings in this area has an annual income of roughly Rs. 56,700 a month, plus an apartment in the complex that has come up on the plot that he re
linquished. Thus, according to one of the people I met on my field study, "They don’t need to move a finger, but have two cars, a fancy house each."

Not all may have been as privileged, however. Vijay Kumar, a helper in Gupta’s store, refers to the 10-15% of the local population who have not shared the fruits from E-City’s development. They primarily belonged to the Scheduled Castes and Scheduled Tribes and did not own any land at all. Many of them work today in housekeeping, pantry, or as auto-drivers in Electronic City. However, even this section of the population seem to be earning fairly decent incomes in the professions they are pursuing, given that in my entire time spent in the area, I found not a single kuccha house of residence.

In an overall analysis, therefore, the Electronics City zoning model is one which survives as a beacon of hope for the rest of the country. Now, it would be nice if the problems of congestion and garbage disposal in the area could be solved this efficiently as well!⊕

About Jinal Dadiya 1 Article
The author has not yet added any personal or biographical info to her or his author profile.

Why Bengaluru is not immune to floods: It’s all about land (and money)

Bengaluru may be physically different from Chennai in some ways. But the causes of Chennai’s flood risk are strikingly similar. Malini Ranganathan examines flood risk here and why the politics of land and “encroachment” lie at the heart of this manufactured risk.

Those three days at the Bangalore Literature Festival

With big names such as Farhan Akhtar, Gulzar and Shobhaa De on the speakers list, a young enthusiast decides to attend Bangalore Literature Festival. Here’s what she experiences.

Bangalore is indeed a ‘Garden city’ even now; not many can boast of such vast gardens in the heart of the city. Blessed with a pleasant climate and fertile land, Bangalore was also fortunate to